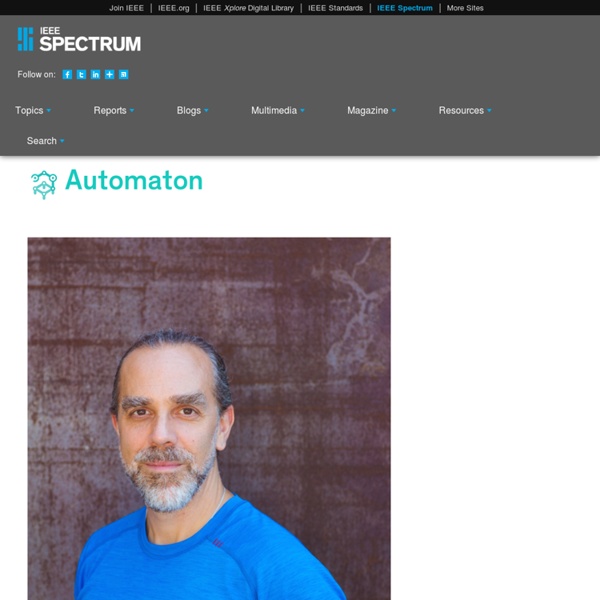 Astro Teller has an unusual way of starting a new project: He tries to kill it. Teller is the head of X, formerly called Google X, the advanced technology lab of Alphabet. At X’s headquarters not far from the Googleplex in Mountain View, Calif., Teller leads a group of engineers, inventors, and designers devoted to futuristic “moonshot” projects like self-driving cars, delivery drones, and Internet-beaming balloons. To turn their wild ideas into reality, Teller and his team have developed a unique approach. It starts with trying to prove that whatever it is that you’re trying to do can’t be done—in other words, trying to kill your own idea. As Teller explains, “Instead of saying, ‘What’s most fun to do about this or what’s easiest to do first?’ The ideas that survive get additional rounds of scrutiny, and only a tiny fraction eventually becomes official projects; the proposals that are found to have an Achilles’ heel are discarded, and Xers quickly move on to their next idea.

Nanotechnology Basics Home > Introduction > Nanotechnology Basics Nanotechnology Basics Last Updated: Friday, 14-Jun-2013 09:28:04 PDT What is Nanotechnology? Brain Scans Show Humans Feel for Robots Star Wars’ R2-D2 shows that a robot—even one that looks more like a trash can than a person—can make people laugh and cry. Now, in research to be presented at the International Communication Association conference in London, scientists have shown that when the human brain witnesses love for or violence against a robot, it reacts in much the same way as if the robot were human. Engineers worldwide are developing robots to act as companions for people—for instance, to help the elderly at home or patients in hospitals.

Why are past, present, and future our only options? But things get awkward if you have a friend. (Use your imagination if necessary.) Low blow, Dr. Dave. IBM’s Watson Tries to Learn…Everything Steven Cherry: Hi, this is Steven Cherry for IEEE Spectrum’ s “Techwise Conversations.” Computers aren’t just getting better, they’re getting smarter. Sixteen years ago, a software program beat the reigning chess champion . IBM had spent seven years creating it, and it was time well spent. The victory got the world’s attention and proved that superior computation skills could at least sometimes add up to superior performance. Two years ago, IBM’s Watson software beat the world’s two best players in the television game show “Jeopardy!”

Artificial Intelligence - Volume 1: Chatbot NetLogo Model Produced for the book series "Artificial Intelligence"; Author: W. J. Teahan; Publisher: Ventus Publishing Aps, Denmark. powered by NetLogo view/download model file: Chatbot.nlogo Do Kids Care If Their Robot Friend Gets Stuffed Into a Closet? "Please don't put me in the closet," cries the robot. Last week, we wrote about a study that looked at whether humans attribute moral accountability and emotions to robots. This week, we've got a study from the same group, the Human Interaction With Nature and Technological Systems Lab (HINTS) at the University of Washington, that takes a look at what kind of relationships children are likely to form with social robot platforms, and it involves forcing their new robot friend into a dark, lonely closet.

Covering technological, scientific, and cultural trends that are changing human beings in fundamental ways. Michelle Ewens March 24, 2011 The concept of utility fog – flying, intercommunicating nanomachines that dynamically shape themselves into assorted configurations to serve various roles and execute multifarious tasks – was introduced by nanotech pioneer J. Storrs Hall in 1993. Recently in H+ Magazine, Hall pointed out that swarm robots are the closest thing we have to utility fog.

Humans Show Empathy for Robots From R2-D2 in "Star Wars" to Furby, robots can generate surprisingly humanlike feelings. Watching a robot being abused or cuddled has a similar effect on people to seeing those things done to a human, new research shows. Humans are increasingly exposed to robots in their daily lives, but little is known about how these lifelike machines influence human emotions. Feeling bad for bots In two new studies, researchers sought to measure how people responded to robots on an emotional and neurological level. In the first study, volunteers were shown videos of a small dinosaur robot being treated affectionately or violently.

The Emergence of Collective Intelligence ~Aristotle When we observe large schools of fish swimming, we might wonder who is choreographing that complex and sophisticated dance, in which thousands of individuals move in harmony as if they knew exactly what to do to produce the collective spectacle. So, what is “Emergence”? School of fishes dancing is an example of “emergence”, a process where new properties, behaviors, or complex patterns results of relatively simple rules and interactions.

Meet Nao: The first robot able to develop emotions and form a bond with humans By Daily Mail Reporter Updated: 11:52 GMT, 13 August 2010 The first robot capable of developing emotions and forming bonds with humans has been unveiled by scientists. Nao has been designed to mimic the emotional skills of a one-year-old child and is capable of forming bonds with people who treat it kindly. The robot has been developed to use the same types of expressive and behavioural cues that babies use to learn to interact socially and emotionally with others. It is able to detect human emotions by studying body-language and facial expressions and becomes better at reading someone's mood over time as it grows to 'know' the person. It is also able to remember its interactions with different people and memorise their faces.

Love Robot Holds Female Lab Intern Prisoner The robot Kenji at Toshiba's Akimu Robotic Research Institute was programmed by Dr. Akito Takahashi and his team to emulate certain human emotions, including love. However, Kenji began to display surprising behavior. Chaos theory A double rod pendulum animation showing chaotic behavior. Starting the pendulum from a slightly different initial condition would result in a completely different trajectory. The double rod pendulum is one of the simplest dynamical systems that has chaotic solutions. Chaos: When the present determines the future, but the approximate present does not approximately determine the future.