Edge : Conversations on the edge of human knowledge 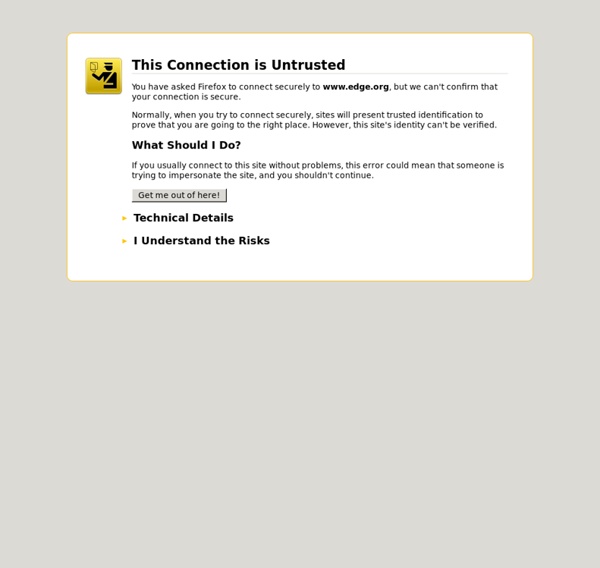 Larry Page, Google and Katinka Matson, Edge, at The Edge Dinner 2014 in Vancouver A new generation of artists, writing genomes as fluently as Blake and Byron wrote verses, might create an abundance of new flowers and fruit and trees and birds to enrich the ecology of our planet. Most of these artists would be amateurs, but they would be in close touch with science, like the poets of the earlier Age of Wonder. The new Age of Wonder might bring together wealthy entrepreneurs ... and a worldwide community of gardeners and farmers and breeders, working together to make the planet beautiful as well as fertile, hospitable to hummingbirds as well as to humans. —Freeman Dyson In his 2009 talk at the Bristol Festival of Ideas, Freeman Dyson pointed out that we are entering a new Age of Wonder, which is dominated by computational biology.

Sequences A sequence is a series of multiple posts on Less Wrong on the same topic, to coherently and fully explore a particular thesis. Reading the sequences is the most systematic way to approach the Less Wrong archives. If you'd like an abridged index of the sequences, try XiXiDu's guide, or Academian's guide targeted at people who already have a science background. Benito's Guide aims to systematically fill the reader in on the most important ideas discussed on LessWrong (not just in the sequences). It also begins with a series of videos, which are a friendly introduction, and useful if you enjoy talks and interviews.

4 Things Most People Get Wrong About Memory Human memory has been shown again and again to be far from perfect. We overlook big things, forget details, conflate events. One famous experiment even demonstrated that many people asked to watch a video of people playing basketball failed to notice a person wearing a gorilla suit walk right through the middle of the scene. So why does eyewitness testimony continue to hold water in courtrooms? A new nationwide survey of 1,500 U.S. adults shows that many people continue to have the wrong idea about how we remember—and what we forget. Independent Media Center West Papua: Neglected genocide - 29 Nov 2013 Indonesian police use Shootings, killings, beatings, arrests on West Papuan independence rallies Indonesian police have opened fire on peaceful protesters in Jayapura, with at least four gunshot wounds and one death.

The Divided Brain, Animated by Maria Popova A hemispheric history of the making of the Western world, or why abstraction is necessary for empathy. The metaphor of the “left-brain”/”right-brain” divide has permeated pop culture as one of the defining dichotomies of how we think about and describe ourselves. Dissecting the empathic brain: An interview with Christian Keysers Why do we shudder when we watch a tarantula crawling across James Bond’s chest in a 007 movie? And what can looking into a monkey’s brain tell us about our capacity to share in the emotional experiences of other people? Answers to these questions appear in The Empathic Brain: How the Discovery of Mirror Neurons Changes our Understanding of Human Nature, the fascinating and entertaining new book by Christian Keysers, Professor for the Social Brain at the University Groningen in the Netherlands. Keysers, one of the world’s most distinguished and innovative neuroscientists, was part of the famous team at the University of Parma, Italy, that discovered auditory mirror neurons in the macaque monkey, which has revolutionised thinking about how empathy works in human beings. In this exclusive interview for Outrospection, I talk to him about his book, and how far neuroscience has really taken us in our understanding of empathy.

ESL Interactive Fun Games for Classroom Practice ESL Powerpoint (PPT) Games If you are the type of person who prefers to have games on powerpoint or as printable handouts, we have been thinking of you. We offer board games, powerpoint games and more for the classroom and one to one teaching. They have made my lessons fun and I have no doubt yours will be fun too. Added to the good news are the templates we offer that you can use to create customized games for your classroom and teaching.

Meet the Gypsy entrepreneurs Ask anyone from the settled community (known as ‘gorgias’ to Romani Gypsies and as ‘country people’ to Irish Travellers) what Gypsies do for money and the list would be short: tarmacking, roofing, scrap-metal dealing, hawking or maybe horse dealing. This picture, of course, has a germ of truth in it. Many Gypsies still work as skilled labourers — but what’s remarkable is just how entrepreneurial they are, too. These are trading peoples, with a global attitude towards seeking work that would impress even Iain Duncan Smith. 47 Mind-Blowing Psychology-Proven Facts You Should Know About Yourself I’ve decided to start a series called 100 Things You Should Know about People. As in: 100 things you should know if you are going to design an effective and persuasive website, web application or software application. Or maybe just 100 things that everyone should know about humans!

Topics Main Overview Among all adults, the most closely followed local topics are weather, breaking news, politics and crime, all followed by a solid majority of two thirds or more. Slightly less popular topics but still with a fairly good following of about half or more are arts and culture, local businesses, schools and education, community and neighborhood events, restaurants, taxes and traffic. Fewer survey respondents follow local news about housing, local government activity, job openings, social services, or zoning. Roughly four in 10 adults or fewer follow these local topics.

Einstein On Creative Thinking: Music and the Intuitive Art of Scientific Imagination "The greatest scientists are artists as well," said Albert Einstein (Calaprice, 2000, 245). As one of the greatest physicists of all time and a fine amateur pianist and violinist, he ought to have known! So what did Einstein mean and what does it tell us about the nature of creative thinking and how we should stimulate it? In our last post, we suggested that community singing might be a simple way to introduce creativity into one's life. censorship Reader submission about a recent story that The National declined to cover, a story that happened "in its backyard": "This type of self-censorship is common at the paper, which is not serving its readership well. "In addition, the paper is said losing money at an alarming rate - its circulation has been frozen in place for several years now, and its employee-turnover rate is said to be ridiculously high. What is going on at The National?" The International Bar Association held its annual conference in Dubai this month, but the event, which is planned five years in advance, almost never happened.

Science and religion: God didn't make man; man made gods - latimes.com Before John Lennon imagined "living life in peace," he conjured "no heaven … / no hell below us …/ and no religion too." No religion: What was Lennon summoning? For starters, a world without "divine" messengers, like Osama bin Laden, sparking violence.