The Law of Accelerating Returns 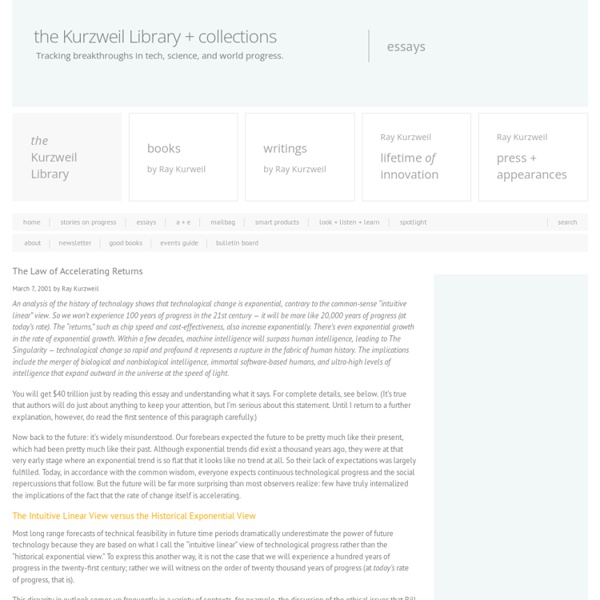 An analysis of the history of technology shows that technological change is exponential, contrary to the common-sense “intuitive linear” view. So we won’t experience 100 years of progress in the 21st century — it will be more like 20,000 years of progress (at today’s rate). The “returns,” such as chip speed and cost-effectiveness, also increase exponentially. There’s even exponential growth in the rate of exponential growth. You will get $40 trillion just by reading this essay and understanding what it says. Now back to the future: it’s widely misunderstood. The Intuitive Linear View versus the Historical Exponential View Most long range forecasts of technical feasibility in future time periods dramatically underestimate the power of future technology because they are based on what I call the “intuitive linear” view of technological progress rather than the “historical exponential view.” The Law of Accelerating Returns The Singularity Is Near This is the nature of exponential growth. Related:  Exponential Change - Technological Singularity

Leading climate change economist assesses chances of a singularity, concludes it is "not near" In Brief A new research paper by Yale economist William Nordhaus takes a sober but serious look at the Singularity hypothesis. What It Is Many economists believe in a theory called stagnation, which posits that economic growth will slow because of resource depletion and declining productivity. But Nordhaus believes that the opposite idea — the singularity — is worth study, because if artificial intelligence ever crosses “some boundary” it could have serious implications for the economy. Therefore Nordhaus has written one of the first academic papers to seriously look at economic implications for the singularity. The Implications If the rapid advance of artificial intelligence is starting to attract mainstream economists, we can only expect the amount and quality of singularity research to improve. From the paper: “So the conclusion as of today is that the Singularity is not near.

New RAND Research System Gathers, Analyzes Expert Opinions TuesdayJune 14, 2011 Researchers have developed a new method of eliciting and analyzing opinions from a large group of experts and laypeople to aid complex decisionmaking, adapting online and social media technologies to lower the cost of such activities while expanding the types of people who can be queried. The system, called ExpertLens, incorporates elements of such well-known approaches as the Delphi method, the Nominal Group Technique and crowdsourcing that are used to collect opinions about problems or to create forecasts. The online system and the associated methodology have performed well during early tests, according to findings published online by researchers from the RAND Corporation in the journal Technological Forecasting & Social Change. Developers say ExpertLens could have wide application across such areas as public policy, health care, finance and marketing, where expert panels are frequently used to help solve problems or predict an unknown future.

Why the Future Doesn't Need Us ( Drawing Life: Surviving the Unabomber. Free Press, 1997: 120.) 2 Garrett, Laurie. The Coming Plague: Newly Emerging Diseases in a World Out of Balance. 3 Isaac Asimov described what became the most famous view of ethical rules for robot behavior in his book I, Robot in 1950, in his Three Laws of Robotics: 1. 4 Michelangelo wrote a sonnet that begins: Non ha l' ottimo artista alcun concetto * Ch' un marmo solo in sè non circonscriva Col suo soverchio; e solo a quello arriva La man che ubbidisce all' intelleto. Stone translates this as: The best of artists hath no thought to show * which the rough stone in its superfluous shell doth not include; to break the marble spell is all the hand that serves the brain can do. Stone describes the process: "He was not working from his drawings or clay models; they had all been put away. (The Agony and the Ecstasy. 5 First Foresight Conference on Nanotechnology in October 1989, a talk titled "The Future of Computation." 7 Kauffman, Stuart. 8 Else, Jon.

How To Steal Like An Artist (And 9 Other Things Nobody Told Me) - Austin Kleon Wednesday, March 30th, 2011 Buy the book: Amazon | B&N | More… Here’s what a few folks have said about it: “Brilliant and real and true.” Read an excerpt below… Tags: steal like an artist

Your internet may be hurting your brain The brain is a wonderful creation and the internet is often used to enhance or complement the capacity and recall within our most important organ. Unfortunately, technology has made it possible for us to actually overload our brains through the speed and volume through which we’re able to multitask online. How many tabs are open on your computer right now? How many screens are you using? Is your iPad or smartphone close and do they have other things happening on them at the same time that you’re reading this? We live in a multitasking world where productivity and enjoyment are often gauged by how much we’re doing at once. Via: OnlineUniversities.com 8 Reasons Why We're About to See an Explosion in Robot Intelligence We are approaching a transformative expansion in robotics. Around half a billion years ago, life forms on Earth suddenly became significantly more diverse, creating most of the general classes of fauna and flora we know today. This period is known as the Cambrian explosion, and the leading theory to explain it is that certain traits, like vision, became advanced enough to help multiple species thrive. The field of robotics might be poised for a Cambrian explosion of its own, according to Gill Pratt, a DARPA program manager. 1) Computing Performance Consider Moore’s Law, the estimation that doubling the amount of mechanisms you can fit in a computer chip improves its computing power. 2) Electromechanical Design and Numerically Controlled Manufacturing (CAD and 3D printing) Spacial perception can be programmed as well as the ability to accurately produce tools by way of 3D printers. 3) Electrical Energy Storage Robots need to last reasonable amounts of time between charges. 7) Data Storage

Convergence of Expert Consensus Through Feedback A discussion of studies directed toward the improved use of expert opinions in operations research. The Delphi method as applied to consensus research is discussed and the results of experiments directed toward convergence of expert opinions presented. This report is part of the RAND Corporation paper series. The paper was a product of the RAND Corporation from 1948 to 2003 that captured speeches, memorials, and derivative research, usually prepared on authors' own time and meant to be the scholarly or scientific contribution of individual authors to their professional fields. Permission is given to duplicate this electronic document for personal use only, as long as it is unaltered and complete. The RAND Corporation is a nonprofit institution that helps improve policy and decisionmaking through research and analysis.

ID2020 and partners launch program to provide digital ID with vaccines The ID2020 Alliance has launched a new digital identity program at its annual summit in New York, in collaboration with the Government of Bangladesh, vaccine alliance Gavi, and new partners in government, academia, and humanitarian relief. The program to leverage immunization as an opportunity to establish digital identity was unveiled by ID2020 in partnership with the Bangladesh Government’s Access to Information (a2i) Program, the Directorate General of Health Services, and Gavi, according to the announcement. Digital identity is a computerized record of who a person is, stored in a registry. “We are implementing a forward-looking approach to digital identity that gives individuals control over their own personal information, while still building off existing systems and programs,” says Anir Chowdhury, policy advisor at a2i. Gavi CEO Seth Berkley says that 89 percent of children and adolescents who do not have identification live in countries where the organization is active.

Ray Kurzweil’s Tech Predictions Have Been Eerily Accurate The Wall Street Journal called him “the restless genius.” Forbes said he was “the ultimate thinking machine.” by Forbes magazine. Inc. Magazine proclaimed him the “rightful heir to Thomas Edison.” Author. Inventor. If you don’t know Ray Kurzweil, you should definitely read up on his Wikipedia page. At that point, you should be giving yourself a pep talk about how you can be as geeky cool as this guy.