Buddhism and the God-idea 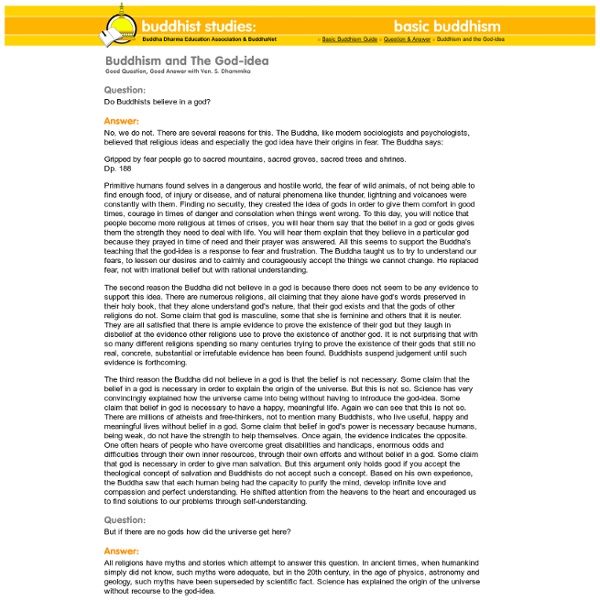 Do Buddhists believe in a god? No, we do not. There are several reasons for this. The Buddha, like modern sociologists and psychologists, believed that religious ideas and especially the god idea have their origins in fear. The Buddha says: Gripped by fear people go to sacred mountains, sacred groves, sacred trees and shrines. Primitive humans found selves in a dangerous and hostile world, the fear of wild animals, of not being able to find enough food, of injury or disease, and of natural phenomena like thunder, lightning and volcanoes were constantly with them. The second reason the Buddha did not believe in a god is because there does not seem to be any evidence to support this idea. The third reason the Buddha did not believe in a god is that the belief is not necessary. But if there are no gods how did the universe get here? All religions have myths and stories which attempt to answer this question. What does the Buddha say about the origin of the universe? Not so.

The Two Truths of Buddhism and The Emptiness of Emptiness There are two truths in Buddhism, conventional and ultimate truth. This penetrating insight dates back to the original Buddha. Understanding the two truths and the relationship between them is vital in seeing through the illusion of inherent existence and realizing emptiness or Śūnyatā.~ Nagarjuna’s philosophy of the Middle Way or Mahyamaka school of Buddhism shows how the two truths are different and yet despite this difference are critically the same. An understanding of this paradox is a journey of remarkable insight and clarity. Nagarjuna’s doctrine of the emptiness of emptiness is imperative on this account.~The references used for this article focused on the brilliant works of Jay Garfield, Professor of Philosophy, Buddhist scholar and translator.

The Tao Te Ching Explained In Depth The Tao Te Ching, also known as the Dao De Jing, is an ancient attempt to point us toward our true nature written by the Chinese Sage, Lao Tzu, in 6th century B.C. Dao De Jing is best translated as "the Way and it's Power". The Dao cannot be revealed or explained adequately in words and yet this beautiful poem was made in an attempt to do so. The Dao along with the Zhuangzi, is a fundamental text for both religious and philosophical Daoism. Many Chinese artists, poets, painters, calligraphers and even gardeners have used the writings as a source of inspiration. The text itself is short, containing only around 5,000 Chinese characters within 81 brief chapters or sections.

BEGINNER'S GUIDE ... © 1995 Dharman Craig PressonAll Rights Reserved “Zen is not what you think!” -- anonymous Preface The purpose of this little book is to assure that all studentsunderstand the mechanics of Zen practice and the basic teachings ofBuddhism. Buddhist Monsters – Inside and Out While there is no shortage of serene and benevolent buddhas, Buddhist folklore abounds with hell-raising zombies, vampires, ghouls, and ogres. But they’re not just the stuff of myth and legends. Depending on whom you ask, these ferocious monsters are thought to be as real as you or me, or serve as potent symbols of our less enlightened sides. Since reincarnation sits at the heart of Buddhist cosmology, we are never far from becoming the monsters we fear. Why Atheists Don't Really Exist Confirmation bias is the tendency to ascribe greater significance to information which supports our pre-existing theories and lesser significance to information which contradicts those theories. We often do this subconsciously. For example you get a new car, and suddenly you notice that type of car on the road with a much greater frequency than you had noticed before. But though confirmation bias generally refers to the inclusion or exclusion of data, there are other ways we can shoehorn the obvious to make it fit within our world view. Last month in The Atlantic, Matthew Hutson wrote a fascinating article titled: “The Science of Superstition: No One Is Immune to Magical Thinking.” Actually as an article it’s really not that fascinating, but as an illustration of the mental contortions one must make to defend atheism, it is Olympic.

Buddhist Inspirations & News » Are Manifestations & Mediums Of Bodhisattvas & Buddhas Around? We should respect all beings, even helpful humans, gods and ghosts. However, Buddhists only take refuge in the perfect Buddhas, Dharma and Aryasangha. An interestingly phrased question arose recently – ‘Why do mediums not get any Buddha to answer their devotees’ questions?’ Before there is further confusion, we should be clear that the use of mediums is not a Buddhist practice. Was the Buddha an Atheist? "The Buddha was an atheist." Writer Allan Badiner made this bald pronouncement in the midst of a conversation that spanned the wee hours of a cloudless Burning Man night. Sitting in a vast tent where, during the day, scores of partygoers had washed off their dust and grime in a plexiglass chamber, we discussed prevailing notions of a Buddhist godhead and, conversely, our mutual embrace of the religion in its secular form. I was most intrigued, though, by Badiner’s description of the Buddha as an atheist.

American Buddhist Journal: Search results for converted to all religions Buddhism in a Nutshell first appeared in 1933. Since then several editions have been published by various philanthropists for free distribution. For a fuller exposition of the subjects dealt with here, readers may refer to the revised and enlarged edition of The Buddha and His Teachings published in 1980. Mahayana Buddhism Origins, Mahayana Buddhism History, Mahayana Buddhism Beliefs Mahayana Buddhism, also known as the Great Vehicle, is the form of Buddhism prominent in North Asia, including China, Mongolia, Tibet, Korea, and Japan. Arising out of schisms—about both doctrine and monastic rules—within Indian Buddhism in the first century C.E., the Great Vehicle considers itself a more authentic version of the Buddha's teachings. The Mahayana accepts the canonical texts of the Theravada tradition (what they derisively call the Hinayana, or "lesser vehicle), but also have a vast corpus of philosophical and devotional texts. The most distinctive teaching of the Mahayana is that the great compassion that is an inherent component of enlightenment is manifest in bodhisattvas (enlightenment beings); these beings postpone nirvana (final enlightenment) in order to assist and guide those beings still suffering in the cycle of rebirths.

American Buddhist Journal: Search results for deva Samsara literally means the "continued wandering on" through cyclic death/rebirth. The inescapable natural-law of karma holds that each of our actions — whether of body, speech, or mind — has consequences in line with the skillfulness or unskillfulness of that action. We can often witness this process firsthand in our own lives, even if the effects may not be immediately apparent. But the Buddha also taught that our intentions and actions (again whether mental, verbal, or physical) have effects that extend far beyond our present life, determining the quality of rebirth we can expect after death: Actions which are wholesome and skillful destine one for a favorable rebirth.

American Buddhist Journal: Search results for nirvana The Buddha as depicted in Thailand (Ursulainbkk/Flickr.com) Nibbana by Bhikkhu Bodhi, edited by Wisdom Quarterly The Buddha says that he teaches only dukkha and the cessation of dukkha. Dukkha, or "suffering," is an ancient term that includes all unpleasant experience from slight agitation to intense agony.

American Buddhist Journal: Search results for khema Just as there were two foremost disciples in the order of monks (Sariputra and Maha Moggallana), likewise the Buddha named two women as foremost amongst nuns, namely Khema and Uppalavanna. Khema -- whose name means well-settled, composed, security, a synonym for nirvana -- was "foremost in wisdom." She belonged to a royal family from Magadha, the middle country where Siddhartha went in search of enlightenment. When she was of marriageable age, she became one of the chief consorts of the king of Magadha, Bimbisara, who himself became a prominent enlightened disciple of the Buddha. As beautiful as her appearance, equally beautiful was her life as the wife of an Indian maha-raja "great king").

American Buddhist Journal: Search results for space Thus have I heard. On one occasion the Blessed One (the Buddha) was staying at Savatthi in the Eastern Temple, the monastery of Migara's mother. Then in the evening, Ven. Ananda, coming out of [meditative] seclusion, went to the Blessed One, bowed, and sat respectfully to one side.

Jataka tales Bhutanese painted thangka of the Jātakas, 18th-19th Century, Phajoding Gonpa, Thimphu, Bhutan Thangka of Buddha with the One Hundred Jataka Tales in the background, Tibet, 13th-14th century. The Jātaka tales are a voluminous body of literature native to India concerning the previous births of Gautama Buddha in both human and animal form. The future Buddha may appear as a king, an outcast, a god, an elephant—but, in whatever form, he exhibits some virtue that the tale thereby inculcates.[1] Often, Jātaka tales include an extensive cast of characters who interact and get into various kinds of trouble - whereupon the Buddha character intervenes to resolve all the problems and bring about a happy ending. In Theravada Buddhism, the Jātakas are a textual division of the Pāli Canon, included in the Khuddaka Nikaya of the Sutta Pitaka. The term Jātaka may also refer to a traditional commentary on this book.