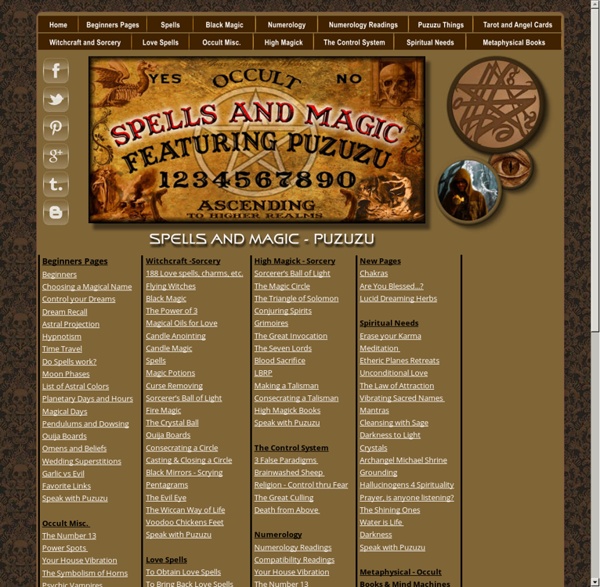 Coffee Fortune Telling Drinking Turkish coffee is a centuries-old ritual, enjoyed best in company and sometimes followed by some fortune telling. As the poet says, "Not the coffee, nor the coffeehouse is the longing of the soul A friend is what the soul longs for, coffee is just the excuse". Remove Black Magic of all kinds, Tantrik Spells, Jaadu Tona, Sihir, Voodoo, etc Troubled by Jaadu Tona, Tantrik, Totake, Kala Jadu, Sihir, Hoodoo, Voodoo, other forms of black magic? Go to my Remove Black Magic Spells page, CLICK HERE. Jaadu Tona / Jadu TonaJaadu Tona or Jadu Tona refers to black magic in the Hindi language (spoken in northern India or about 41% of India as a whole).

JMR HIGGS: KLF: Chaos Magic Music Money - new book out now In 1994 Bill Drummond and Jimmy Cauty took a million pounds to a deserted boathouse on the island of Jura, and burnt it. I wish they hadn't, to be honest, but there you go. I read about it afterwards in an article in the Observer, which I immediately clipped and put in a drawer.

Serena's Guide to Divination and Fortune Telling using Tea Leaves, Coffee Grounds, Wine Lees. Tasseography. Tasseomancy. Cafeomancy. Reading the Tea Leaves or Coffee Grounds Reading tea leaves or coffee grounds has traditionally been practiced in many countries by the women in the family, typically at gatherings of family and friends. Tea leaf reading is also referred to as tasseomancy, tasseography or teomancy. Coffee reading is known as cafeomancy. But this sort of divination has long been practised wherever there is a liquid that leaves behind some sort of dregs, whether it be tea leaves or coffee grounds.

Soul Types: The Seven Roles in Essence - Personality & Spirituality Your soul is your innermost being, your higher self, who you really are. And according to the Michael teachings, your soul will have one of seven distinct ‘vibrations’ or ‘tones’. The Spectrum of Essence When we cast light through a prism, it comes out in the form of a spectrum which we perceive as the seven colours of the rainbow. Similarly, when the Source of all being (God, the Tao, the Absolute, whatever you like to call it) casts its consciousness into the relative world, it comes out in the form of individual souls of seven types:

The Gaian Dragon Coral Canyon Before the Fire Please be patient while I put this all together. There's actually quite a bit here already, but I'm always adding more. After all, in the Material World perfection is always a work-in-progress. Spells - All Beginner Spells - From White to Black - Magick Spell Craft 19:09-- G_1891: Hola 15:51-- strongwindmakerz: Hello all how's every day today? 16:52-- G_9319: awsome 17:20-- G_7872: hi 20:14-- Sammy: Hi all 3:50-- G_6975: Etmm Book of Shadows - Cleansing spells All areas where people live or work will "collect" energies - both positive and negative. Every person who visits or uses the space will leave their own imprint of their energy. Thoroughly cleansing and purifying the area will remove these energies and create a more harmonious space. This ritual is especially useful when moving house - to remove all your energies from your old living space and also to cleanse your new living space in order to prevent living amongst the old occupant's emotional baggage. Take a bunch of dried cleansing herbs, eg. sage, and light them holding them over a smudging bowl or other suitable vessel. Next smudge the entire house.

Embracing Cailleach's Wild Winds of Winter In the Gaelic language, Cailleach translates as old woman or hag. In Goddess mythology Cailleach is the Celtic Goddess of weather and storms. As a crone Goddess she is associated with the season of Winter, bringing brutal cold, biting winds and snow. She is fierce and, sometimes unforgiving. The most predominate tale tells of Cailleach capturing the beautiful Maiden Goddess and holding her captive in a mountain cave until the arrival of spring. A lesser known, and unknown to me before painting this Goddess of my Muse, is that of the Scottish Cailleach Bheur.