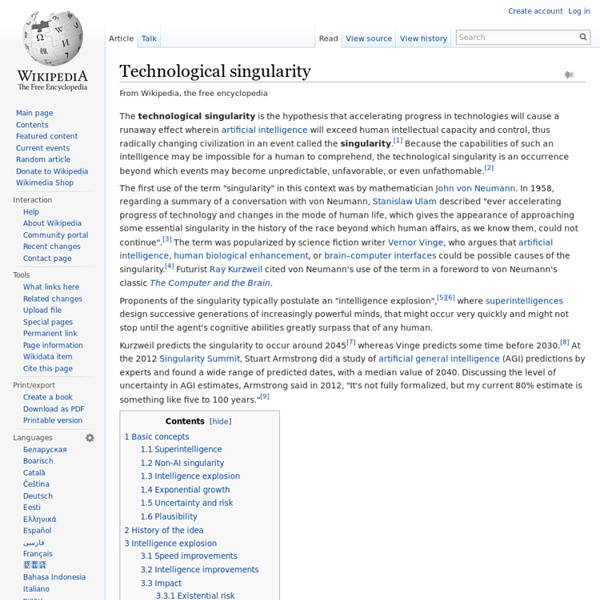 The technological singularity is the hypothesis that accelerating progress in technologies will cause a runaway effect wherein artificial intelligence will exceed human intellectual capacity and control, thus radically changing civilization in an event called the singularity.[1] Because the capabilities of such an intelligence may be impossible for a human to comprehend, the technological singularity is an occurrence beyond which events may become unpredictable, unfavorable, or even unfathomable.[2] The first use of the term "singularity" in this context was by mathematician John von Neumann. Proponents of the singularity typically postulate an "intelligence explosion",[5][6] where superintelligences design successive generations of increasingly powerful minds, that might occur very quickly and might not stop until the agent's cognitive abilities greatly surpass that of any human. Basic concepts Superintelligence Non-AI singularity Intelligence explosion Exponential growth Plausibility

The best visuals to explain the Singularity to senior executives Tomorrow morning I’m doing a presentation to the top executive team of a very large organization on the next 20 years. Most of what I will cover will be general societal, business and technological drivers as well as specific strategic issues driving their business. However as part of stretching their thinking I’ll also speak a about the Singularity. Moore's law Moore's law is the observation that, over the history of computing hardware, the number of transistors on integrated circuits doubles approximately every two years. The law is named after Intel co-founder Gordon E. Moore, who described the trend in his 1965 paper.[1][2][3] His prediction has proven to be accurate, in part because the law is now used in the semiconductor industry to guide long-term planning and to set targets for research and development.[4] The capabilities of many digital electronic devices are strongly linked to Moore's law: processing speed, memory capacity, sensors and even the number and size of pixels in digital cameras.[5] All of these are improving at roughly exponential rates as well. This exponential improvement has dramatically enhanced the impact of digital electronics in nearly every segment of the world economy.[6] Moore's law describes a driving force of technological and social change in the late 20th and early 21st centuries.[7][8] History[edit]

Introducing ethics in Information and Computer Sciences: 1.1 ‘People, not guns, kill people’? - OpenLearn - Open University - ETHICS_1 Navigation, which, like oratory, saves not only people's lives from extreme danger but also the persons and property which belongs to them. Navigation is a modest art that knows her place; she does not put on airs or make out she has performed some brilliant feat, even though she achieves as much as forensic[public] oratory; she brings people safe from Aegina for no more than two obols, I believe, and even if they come from Egypt or Pontus or ever so far away, the very most she charges for this great service, for conveying in safety, as I said, a man and his children and property and women, is two drachmae when he disembarks at the Piraeus. The quote above is taken from Plato's dialogue Gorgias (§511d–e).

Robert Lanza » Is Death An Illusion? Evidence Suggests Death Isn’t the End After the death of his old friend, Albert Einstein said “Now Besso has departed from this strange world a little ahead of me. That means nothing. People like us … know that the distinction between past, present and future is only a stubbornly persistent illusion.” New evidence continues to suggest that Einstein was right – death is an illusion. Data (computing) In an alternate usage, binary files (which are not human-readable) are sometimes called "data" as distinguished from human-readable "text".[4] The total amount of digital data in 2007 was estimated to be 281 billion gigabytes (= 281 exabytes).[5][6] At its heart, a single datum is a value stored at a specific location. To store data bytes in a file, they have to be serialized in a "file format". Typically, programs are stored in special file types, different from those used for other data. Executable files contain programs; all other files are also data files.

Infinity Point Will Arrive by 2035 Latest Eray Ozkural December 23, 2013 During writing a paper for the 100 Year Starship Symposium, I wished to convince the starship designers that they should acknowledge the dynamics of high-technology economy, which may be crucial for interstellar missions. Chaos theory A double rod pendulum animation showing chaotic behavior. Starting the pendulum from a slightly different initial condition would result in a completely different trajectory. The double rod pendulum is one of the simplest dynamical systems that has chaotic solutions. Chaos: When the present determines the future, but the approximate present does not approximately determine the future.

My bright idea: Robert Winston Robert Winston, Professor of Science and Society and Emeritus Professor of Fertility Studies at Imperial College, London, is one of the best-known popularisers of science in this country and has a reputation for taking a provocative stance on many issues. His latest book, Bad Ideas? (Bantam Press) deals with the dark side of the inventions that have shaped human history, and when he arrives at the Observer offices, this 69-year old doctor, sometime TV presenter and Labour peer is on characteristically punchy form.

Electrical signatures of consciousness in the dying brain ANN ARBOR, Mich. -- The "near-death experience" reported by cardiac arrest survivors worldwide may be grounded in science, according to research at the University of Michigan Health System. Whether and how the dying brain is capable of generating conscious activity has been vigorously debated. But in this week’s PNAS Early Edition, a U-M study shows shortly after clinical death, in which the heart stops beating and blood stops flowing to the brain, rats display brain activity patterns characteristic of conscious perception. “This study, performed in animals, is the first dealing with what happens to the neurophysiological state of the dying brain,” says lead study author Jimo Borjigin, Ph.D., associate professor of molecular and integrative physiology and associate professor of neurology at the University of Michigan Medical School.