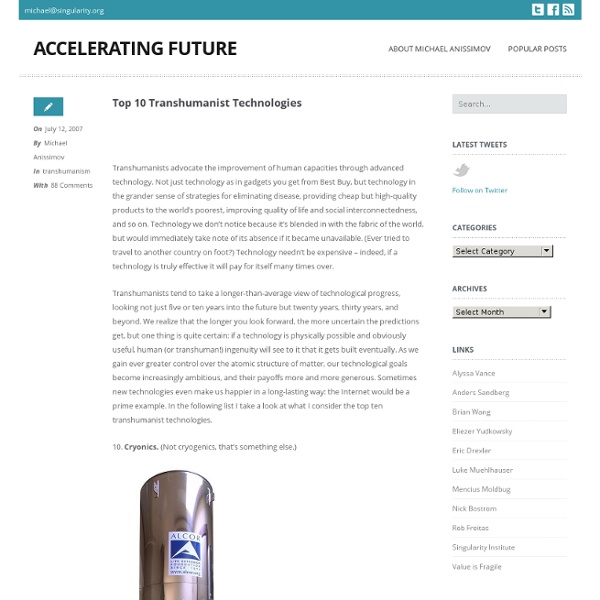 Transhumanists advocate the improvement of human capacities through advanced technology. Not just technology as in gadgets you get from Best Buy, but technology in the grander sense of strategies for eliminating disease, providing cheap but high-quality products to the world’s poorest, improving quality of life and social interconnectedness, and so on. Technology we don’t notice because it’s blended in with the fabric of the world, but would immediately take note of its absence if it became unavailable. (Ever tried to travel to another country on foot?) Technology needn’t be expensive – indeed, if a technology is truly effective it will pay for itself many times over. Transhumanists tend to take a longer-than-average view of technological progress, looking not just five or ten years into the future but twenty years, thirty years, and beyond. 10. 9. Clearly, World of Warcraft’s eight million subscribers and SecondLife’s five million subscribers are onto something. 8. 7. 6. 5. 4. 3. 2. Related:  Exponential Change - Technological Singularity

Three Major Schools (Originally appeared on the Machine Intelligence Research Institute blog, September 2007.) Singularity discussions seem to be splitting up into three major schools of thought: Accelerating Change, the Event Horizon, and the Intelligence Explosion. Accelerating Change: Core claim: Our intuitions about change are linear; we expect roughly as much change as has occurred in the past over our own lifetimes. But technological change feeds on itself, and therefore accelerates. Change today is faster than it was 500 years ago, which in turn is faster than it was 5000 years ago. The thing about these three logically distinct schools of Singularity thought is that, while all three core claims support each other, all three strong claims tend to contradict each other. I find it very annoying, therefore, when these three schools of thought are mashed up into Singularity paste. Apocalyptism: Hey, man, have you heard?

Singularity Theory May Explain Fermi Paradox The Drake equation demonstrates that due to the vast scope of our universe, it is highly unlikely that there is not intelligent life other than us. The Fermi paradox ponders why (considering the results from the Drake equation) we have not yet detected any other intelligent life. Singularity theory anticipates a point in time where rapid growth in intelligence and replication create a border that is like an asymptote or singularity threshold beyond which lies an undefinable area that is not comparable to what we currently know as intelligence. The Schwarzchild radius describes the limit of the ability of light to escape a black hole singularity, or the “edge” of the black hole where it becomes totally black. The answer to the Fermi paradox may lie in the idea of a singularity-like expansion in intelligence that rapidly moves beyond our ability to understand it or detect it. By Omar Fink on September 22nd, 2010 Stumble It!

Why the Word "Transhumanism" Should Bother You, Too Want to have the ability to move things around with your mind, print out any new body parts you might need, including organs, and be able to work from home every day via a completely convincing virtual reality setup? All of these things are not only within reach, according to a movement that is gaining traction more rapidly than almost any other in history, but they are inevitably happening within the next 30 years. Many authors (myself included) struggle to give a name to this incredible movement, instead deferring to the event where all of this converging technology culminates in a brand new way of life for all human beings, utterly different in ways we aren't capable of imagining with our "unaugmented" human brains: the Technological Singularity. The world we live in is not one of linear growth, nor has it ever been one.

Contact lenses upgrade your eyes to enable true immersive VR Our eyes are just not built for the future. It sucks, but it's true. We can't physically focus on things that are very close to us, which is why we're not all rocking high-resolution immersive virtual reality displays built into our eyeglasses. We've posted about head-mounted VR displays a lot around here, but there's always a compromise going on: you can have a small, slick system that projects a little image with a narrow field of view, or you can have a gigantic bulky system that projects a big image with a wide field of view. The obvious solution, then, is to modify our eyes to enable them to focus on objects that are much, much closer. Innovega's iOptik contact lenses have special filters and secondary lenses built into them that block out all of the light from close-up displays except for a narrow beam that's refocused by the lens itself and fired straight back into your pupil. Via Innovega

Evolution of evolvability Evolution of Evolvability This paper shows how evolution tunes the content and frequency of genetic variation to enhance its evolvability. Genetic evolution is not random or entirely blind. Genetic systems are like nervous systems and brains—they have been structured and organised by evolution to enhance their ability to discover effective adaptations. (For a more general approach to the evolution of evolvability, see Chapters 8 to 12 inclusive of the on-line book Evolution's Arrow. It examines in detail how evolution itself has evolved. (a final version of this paper was published in the Journal of Social and Evolutionary Systems (1997) 20: 53-73.) The cognitive ability of a genetic system is its capacity to discover and perpetuate beneficial adaptations. Cognitive ability will be influenced by genetic arrangements which affect the range and types of variant genotypes which are produced and trialed within the genetic system. Are genetic arrangements which have these features feasible?

The Futurist: Are You Acceleration Aware? The single most necessary component of any attempt to make predictions about the future is a deep internalized understanding of the accelerating, exponential rate of change. So many supposed 'experts' merely project the rate of progress as a linear trend, or even worse, fail to recognize progress at all, and make predictions that end up being embarrassingly wrong. For example, recall that in the early 1970s, everyone thought that by 2000, all of the Earth's oil would be used up. Equally simple-minded predictions are made today. "By 2080, Social Security will no longer be able pay benefits, leaving many middle Americans with insufficient retirement funds." 2080?! Or how about this one? "Immigration to the US from third-world countries will make such people a majority of the US population by 2100, making the US a third-world country." 'Third-world'? In any event, the world of 2100 will be more different from 2006 than 2006 is different from 8000 BC. Here is why :

The Unique Challenges of Exponential Leadership Salim Ismail The term “exponential” refers to a sequence or process by which desirable results are achieved. As Salim Ismail explains in his eponymous book, written with Michael S. Malone and Yuri van Geest, an exponential organization (ExO) “is one whose impact (or output) is disproportionately large — at least 10 times larger — than its peers because of the use of new organizational techniques that leverage accelerating technologies.” Such organizations pose unique challenges to those who aspire to lead them. Here are the six characteristics of exponential leadership, accompanied by Ismail’s comments: 1. 2. 3. 4. 5. 6. “How exponential is the leadership throughout your own organization?” Salim Ismail is a sought-after speaker, strategist and entrepreneur based in Silicon Valley. Salim has spent the last six years building Singularity University as its founding Executive Director and current Global Ambassador.

Salim Ismail on Singularity University [Transcript] Endeavor is pleased to make public the following transcript from a presentation at the 2011 Endeavor Entrepreneur Summit in San Francisco. The event, which assembled over 450 entrepreneurs and global business leaders, featured dozens of entrepreneurship-related presentations by top CEOs and industry experts. Overview: Salim Ismail, successful angel investor and entrepreneur, former vice president of Yahoo! and current executive director of Singularity University discusses what Singularity University is and does and how technology will radically change the future. Bio: Salim is a successful angel investor and entrepreneur – his last company, Angstro, was acquired by Google in August 2010. From the full remarks: Salim: Singularity University is a nonprofit organization in Silicon Valley. And the question is, what will we do with that kind of computing power? Question: But even if it is so small, would people still buy something that tiny? Salim: Yes. Are you familiar with 3D printing?