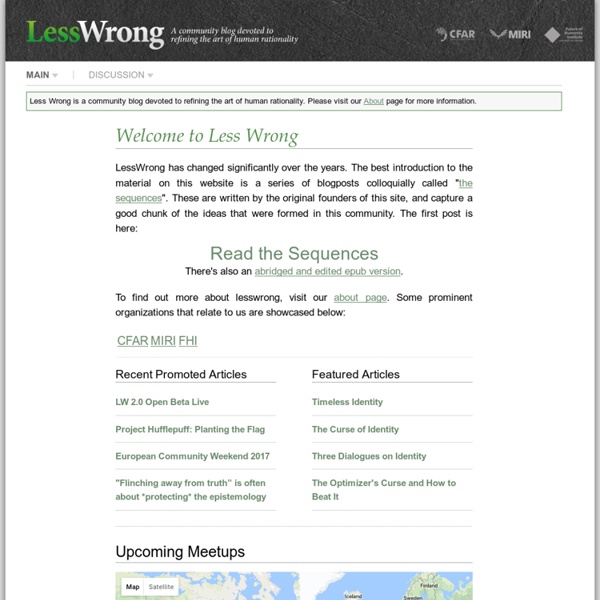 A curatedcommunityblogA community discussion boardA source of edited rationality materials ... And a promoter of regular meetups around the world. Less Wrong is: In the past four decades, behavioral economists and cognitive psychologists have discovered many cognitive biases human brains fall prey to when thinking and deciding. Less Wrong is an online community for people who want to apply the discovery of biases like the conjunction fallacy, the affect heuristic, and scope insensitivity in order to fix their own thinking. Bayesian reasoning offers a way to improve on the native human reasoning style.

Sequences A sequence is a series of multiple posts on Less Wrong on the same topic, to coherently and fully explore a particular thesis. Reading the sequences is the most systematic way to approach the Less Wrong archives. If you'd like an abridged index of the sequences, try XiXiDu's guide, or Academian's guide targeted at people who already have a science background. Benito's Guide aims to systematically fill the reader in on the most important ideas discussed on LessWrong (not just in the sequences). It also begins with a series of videos, which are a friendly introduction, and useful if you enjoy talks and interviews. If you prefer books over blog posts, Thinking and Deciding by Jonathan Baron and Good and Real by Gary Drescher have been mentioned as books that overlap significantly with the sequences.

100 Websites You Should Know and Use (updated!) Entertainment Meet David Peterson, who developed Dothraki for Game of Thrones There are seven different words in Dothraki for striking another person with a sword. Among them: “hliziﬁkh,” a wild but powerful strike; “hrakkarikh,”a quick and accurate strike; and “gezrikh,” a fake-out or decoy strike.

Have conferences like TED, and the explosion of the "Idea Class" run out of ideas? (Flickr/TEDxJakarta) Back in 1986, a guy named Richard Saul Wurman put together a meeting. A conference if you will. It was part show and tell, part 18th century salon. Nautil.us The astounding quantities of discarded plastic that end up in oceans each year tend to concentrate in ring-like swirls of currents called gyres, yet most of it can be hard to spot—not because it’s not there in great quantities, but because it often takes the form of fingernail-sized microplastics. “It looks like pristine ocean until you tow your net through the water,” researcher Erik Zettler at Sea Education Association (SEA) said about the North Atlantic Gyre. “That’s when you find the plastic.” The presence of so much plastic debris at sea poses dire threats to the marine life unlucky enough to ingest small bits of it or to become entangled in nets or plastic bags. But recent research has also revealed some of the surprising ways a few resourceful marine creatures use it to their own advantage. For some species, the tiniest scrap of plastic can offer transportation across the open sea, or access to dinner, or even an assist in reproduction.

Free Software for College Students - StumbleUpon If you’re in college, check out these eight lesser known, but still indispensable software applications for your computer. We bet these will be as useful as Dropbox and Evernote! Photo by Samantha Decker. News and Investigative Journalism from Around the World The Syrian Peace Talks Look Like a Tragic Farce The "Geneva II" talks got off to a bad start, as participants immediately accused one another of being illegitimate and committing horrible crimes. And even if the two sides could come together, they'd have to figure out how to deal with the jihadist extremists on the ground. VICE News Khat Power Khat is a chewable herbal stimulant, popular among the UK's Somali and Yemeni communities. Despite there being little or no evidence that the drug causes harm to its users, the British government is working to outlaw khat.

Bubble 2.0 Is Popping I've discussed Bubble 2.0 -- the new crop of social media companies that have enjoyed sharp appreciation in the private markets, often funded by Goldman Sachs (GS) -- numerous times before, observing how many of these companies have outlandish expectations, no profits, and a flawed growth strategy that focuses on user acquisition rather than increasing key metrics such as revenue from assets or revenue per customer. The companies that I lump into Bubble 2.0 are Facebook (FB), Zynga (ZNGA), LinkedIn (LNKD), Groupon (GRPN), Yelp (YELP), Zillow (Z), and Pandora (P); others in the IPO pipeline include Twitter, Foursquare, AirBnb, and Spotify. There are some signs, however, that the bubble is beginning to pop. This could be an opportunity for short sellers looking for a quick profit, or a sign for bulls to take profits and close their position.

Learning and Memory From song lyrics to former addresses, our brains hold a seemingly endless supply of information. How are we able to learn, store, and recall information with such ease? Brain cells undergo chemical and structural changes during learning. By changing the number, or strength, of connections between brain cells, information is written into memory. Ongoing studies are helping scientists identify how different areas of the brain work together to enhance memory formation and storage. This insight could one day guide new treatments for learning disorders and memory loss. 25 Killer Websites that Make You Cleverer It’s easy to forget that we have access to a virtually limitless resource of information, i.e. the Internet. For a lot of us, this is even true at our fingertips, thanks to the ubiquity of smartphones and an ever-increasing push for online greatness by tech engineers all over the world. As a result, there are countless websites out there that are geared to make you smarter and more brilliant for either a low or no cost. Here are just 25 killer websites that may just make you more clever than ever before. 1.

30 Fantastic Websites To Lose Yourself In If you follow me on Twitter you might know that I moved to London last September. You might also know that since then I’ve had nothing but trouble trying to get an Internet connection set up in my home. Fortunately, last week I finally got everything up and running and to mark my triumphant return to the world of the Internet I went a little crazy and shared 30 of my favourite websites on Twitter. Analysis & Opinion By Peter Thal Larsen The author is a Reuters Breakingviews columnist. The opinions expressed are his own. 300 mind expanding dokus I watch a lot of documentaries. I think they are incredible tools for learning and increasing our awareness of important issues. The power of an interesting documentary is that it can open our minds to new possibilities and deepen our understanding of the world. On this list of mind expanding documentaries you will find different viewpoints, controversial opinions and even contradictory ideas. Critical thinking is recommended.