HOME. Ultimate amps for the ultimate speaker - Technology & science - Tech and gadgets. Even though my search for the ultimate home music-reproduction system will probably never end, I think I’ve gotten very, very close to what I believe is near-perfection. 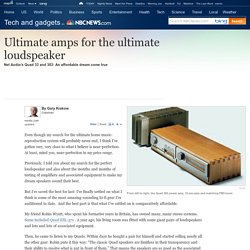 At least, mind you, near-perfection in my price range. Previously, I told you about my search for the perfect loudspeaker and also about the months and months of testing of amplifiers and associated equipment to make my dream speakers sound their best. But I’ve saved the best for last: I’ve finally settled on what I think is some of the most amazing-sounding hi-fi gear I’ve auditioned to date. And the best part is that what I’ve settled on is comparatively affordable. My friend Robin Wyatt, who spent his formative years in Britain, has owned many, many stereo systems. Then, he came to listen to my Quads. It's all about the ampThat’s why Robin settled on the amazing ASR Emitter I Exclusiv Blue amplifier.

Luckily, I’ve found something nearly as good. Upgrading for better soundI upgraded a 33 preamp by myself. ~The Valve ( and Hi-Fi ) Audio Interest pages ~ Quad Refurbishing. For many people general overhaul of an old Quad amplifier may seem a useless affair. 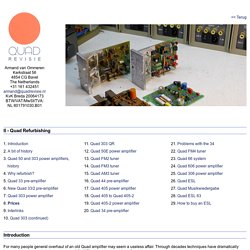 Through decades techniques have dramatically improved, so why not just buy a new amplifier? That is a misconception. Sure, there were many technical improvements but mostly for aspects like miniaturization and exchange transistors for IC’s. These developments facilitated mass production, but mass production seldom leads to quality improvement; all too often even to the contrary. 33 and FM3 revised versions 33 and FM3 seen from the back Sure, many people possess that genial design of Peter Walker and Peter Baxandall, the Quad 33/303 pre/power amplifier combination (and the FM3 tuner, developed by Peter Walkers intimate friend and audio editor for Gramophone Magazine, Geoffry Horn) stored in a corner on the attic, collecting dust.

After about 15 years of use performance of most electronics is deteriorating more or less. Prices. ~ QUAD 303 Amplifier modified for general purpose Lab amp ~ In 2008 I took a QUAD303 and 33 pre-amp as part exchange against some work on a QUAD405 which was to be modified with my DCD–Mod3 PCBs and with an input gain control for use in a studio ~ The QUAD 303 I was told was originally "from the BBC" and was a 303A2 which was a BBC modified version for driving the LS3/8 loudspeaker and should have been fitted with an active crossover in a tray under the amplifier base The amplifier arrived and did not have the crossover fitted and it had been modified with 4mm speaker sockets whereas the 303A2 output would have been on a 5 pin "XLR" connector which was still fitted ~ I like the 303 and because the 303 A2 has a handle fitted to the top I thought it would make an excellent general purpose "Lab Amp" especially when fitted with a "volume" control. 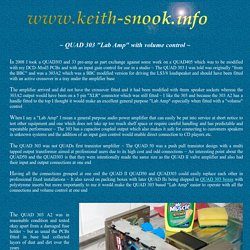 Amplifier Repair, Amplifier Servicing, Amplifier Modification. We specialise in British vintage audio amplifier servicing from 1960 valve models through to the late 80s - what many audio enthusiasts regard as the golden era of British audio design. 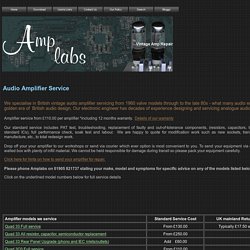 Our electronic engineer has decades of experience designing and servicing analogue audio equipment.Amplifier service from £110.00 per amplifier *including 12 months warranty. Details of our warranty Our standard service includes PAT test, troubleshooting, replacement of faulty and out-of-tolerance components, (resistors, capacitors, transistors, diode rectifiers, standard ICs), full performance check, soak test and labour. We are happy to quote for modification work such as new sockets, transformer replacement, lead manufacture, etc., to total redesign work. Drop off your your amplifier to our workshops or send via courier which ever option is most convenient to you. Net-audio.co. Quad 303 Manual - Stereo Power Amplifier - HiFi Engine. 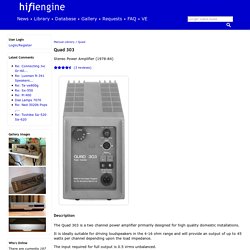 It is ideally suitable for driving loudspeakers in the 4-16 ohm range and will provide an output of up to 45 watts per channel depending upon the load impedance. The input required for full output is 0.5 Vrms unbalanced. Transistor triples are employed in an original circuit to provide a completely symmetrical output stage, quiescent current independent of junction temperature and symmetrical current and voltage limiting.

Harmonic and intermodulation distortion products in the audio range are so low that they are difficult to measure in meaningful terms. The amplifier is unconditionally stable and may be used with any load. The two channels may be used together or independently but the two outputs should not be paralleled without incorporating some form of current sharing network. Specifications Power output: 45 watts per channel into 8Ω (stereo) Downloads. ~ QUAD 405 Amplifier Information and Modification ~ The QUAD405 input op-amp forms part of a d.c. feedback loop to ensure 0V output at the speaker terminals ~ At d.c. the input op~amp is operating at maximum gain and its output is d.c. coupled through the current dumping stage to the output terminals ~ The output terminal voltage is fed back to the inverting input of the op–amp via R4+R5 = 26.7kΩ to be compared with the ground reference at its non–inverting input ~ As there is no corresponding high resistance at the non–inverting input any input bias current will give a d.c. offset at the speaker terminals If you feel you must change the op–amp consider the input bias current specification which generally gets worse as gain bandwidth product (GBWP) increases ~ FET input devices like TLE2071, OP134 and OPA604 are all good for audio and have very low input bias current required for the low output voltage offset in this design C2 removes the a.c. content of the feedback signal as explained next . . . 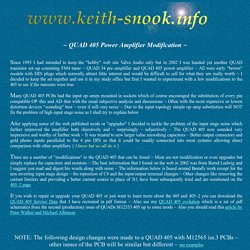