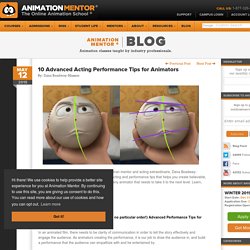 She walks you through her secrets on acting and performance tips that helps you create believable, living and breathing characters. A must read for any animator that needs to take it to the next level. Learn, absorb it, and go animate that shot! - The Animation Mentor Crew Beyond the 12 Principles: Dana’s Top Ten (in no particular order!) In an animated film, there needs to be clarity of communication in order to tell the story effectively and engage the audience. In order for the audience to empathize, they need to believe in the characters – they have to appear to live and think on their own, be spontaneously reacting, appealing and communicate clearly. In order for the audience to be entertained by the characters, the shots need to be appealing in composition, posing, rhythm and phrasing, and contain acting choices that feel fresh.

Keep the audio/dialogue in mind as well. Acting. Share “You have to be in it for the process.” 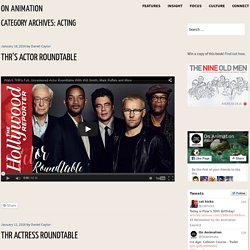 An excellent analysis of charm in film by fellow AM graduate and classmate, Dan Fox. Actor Brian Cox, Rector at Dundee University took time out to talk to the animation students of Duncan of Jordanstone College of Art and Design about acting theory and film making. Continue reading → Kevin Spacey follows Dustin Hoffman with a five hour acting course at MasterClass. 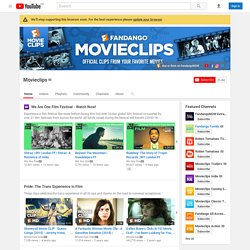 FILM DESCRIPTION:Home Alone is the highly successful and beloved family comedy about a young boy named Kevin (Macaulay Culkin) who is accidentally left behind when his family takes off for a vacation in France over the holiday season. Once he realizes they've left him "home alone," he learns to fend for himself and, eventually has to protect his house against two bumbling burglars (Joe Pesci, Daniel Stern) who are planning to rob every house in Kevin's suburban Chicago neighborhood. Though the film's slapstick ending may be somewhat violent, Culkin's charming presence helped the film become one of the most successful ever at the time of its release. Top Ten Posts. Comedy for Animators. 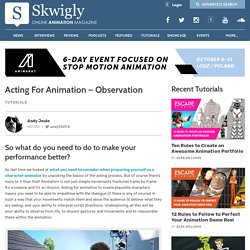 So last time we looked at what you need to consider when preparing yourself as a character animator by unpicking the basics of the acting process. But of course there’s more to it than that! Animation is not just simple movements fractured frame by frame. It’s a science and it’s an illusion. Acting For Animation - Observation. Acting For Animation: Character Development. Tim's Animation Mentor Blog. Job, Joris & Marieke are a small studio based in The Netherlands who produce independent short films, music videos, commercials and illustrations. 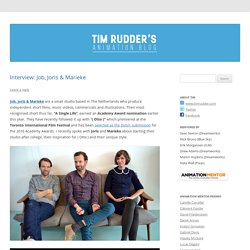 Their most recognised short thus far, “A Single Life”, earned an Academy Award nomination earlier this year. They have recently followed it up with “( Otto )” which premiered at the Toronto International Film Festival and has been selected as the Dutch submission for the 2016 Academy Awards. I recently spoke with Joris and Marieke about starting their studio after college, their inspiration for ( Otto ) and their unique style. How to Draw and Animate With Weight. FMX 2013 // Ep. 3: Acting for Animators 1/2. Www.algarcia.org/AnimationPhysics/BalanceTutorial.pdf. The Animated Cartoon Factory's Animation School. Welcome to the The Animated Cartoon Factory. 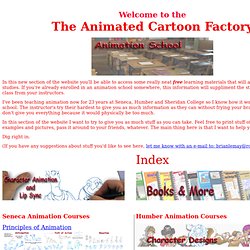 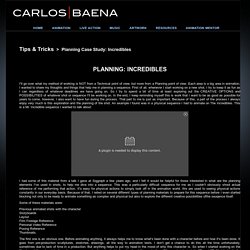 Each area is a big area in animation. The Lozt Boyz: How I Study Animation. If studying in school is essential to getting good grades, couldn't you say the same for creating good animation? 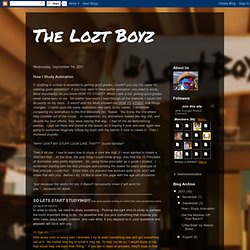 If you truly want to have better animation, you need to study. More importantly, do you know HOW TO STUDY? When I was a kid, getting good grades never came easy to me. No matter how much I read through all the material, I would still do poorly on my tests. It wasn't until my Mom showed me HOW TO STUDY, that things changed.

Animation Notes Contents. Cut Outs - Straight Ahead Animation The projects below are not required submissions but the notes may be of interest to you. 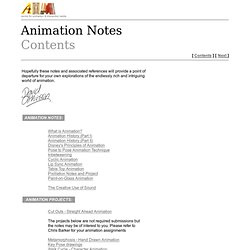 James Baxter - Notes on Acting for Animation. Performance Animators are the ones that throw the switch; the ones who make an audience forget that they are animated characters. 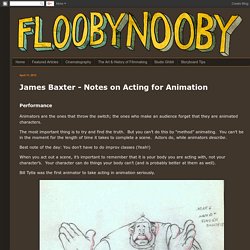 The most important thing is to try and find the truth. But you can’t do this by “method” animating. You can’t be in the moment for the length of time it takes to complete a scene. Actors do, while animators describe. Glen_Keane_Animation.pdf. Rethinking the run cycle. While I was looking into options for running again (post hip-arthoscopy), I've started reading a lot about "pose" and "chi" aka, "minimalist" running techniques; essentially landing on the midfoot and keeping a slight bend in the knees as way of lessening impact while running (and preventing more injury) As I looked into it more, I started approaching it all with an animator's eye.