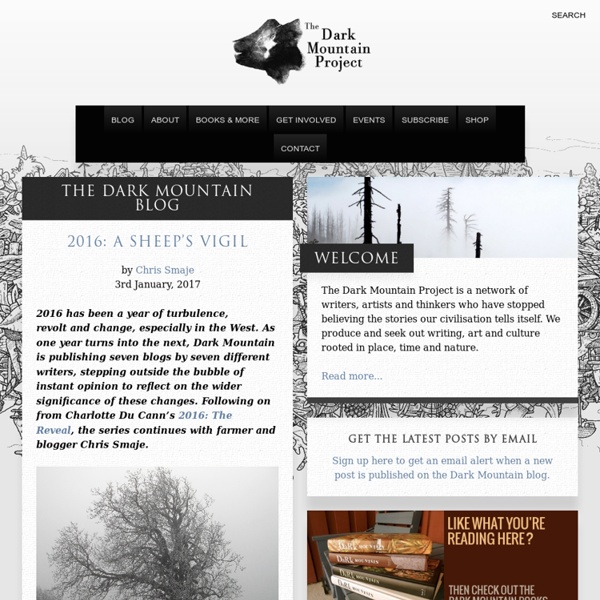 It’s the question the man keeps asking us, as he storms the stage and curses the thousand-year-old myth of exile that has wreaked havoc on the planet and the erstwhile robust psyche of the human race. Psychotherapy has betrayed us he thunders, it ignores the Earth, it takes no account of social justice and no longer speaks with the dead. We are divorced from our collective daemon and are paying the price. The gods are fed up! he declares. They do not fit in our heads.

Sacred Circle of the Great Mystery Shamanic Society The purpose of these conferences and gatherings is to bring together the Shamanic community & family of all traditions, and to invite the clans, tribes, and families of other countries to come together as one community. We call to everyone to join the gathering and celebrate the earth, the stars, the spirits and the magic of each other. It is in this community we come to share our wisdom, our experience, our spirit, our blessings, and our healing. British Columbia Gatherings: 2014: Walking on 4 Legs – 5th BC Residential Shamanic Conference & Gathering 2013: Return to the Forest - 4th BC Residential Shamanic Conference & Gathering

Uldine - What Does My Name Mean? - Meaning and analysis of this name of Uldine A Few Testimonials " The Kabalarian Society provides succour, happiness, and fulfilment to diverse people through Name Analysis and reports. The Society generates life's purpose for every enquirer." Increase Your Wealth By Paying Homage to Yellow Dzambhala! A few blogs ago I mentioned about how Christians look at money as the root of evil. Although no one wants to be poor, in a very strict Christian perspective, poverty is almost welcomed. In fact, it is thought that a suffering, problems that includes poverty is actually a test from God. Please be assured though that I’m not anti-Christianity and neither am I criticizing the religion. I’m simply stating a fact and it’s not necessarily bad, it’s just that I don’t really understand this.

Women's Red Drum workshop – Red Moon Designs “The tree birthed the drum so that we and spirit could speak with common tongue.” E Bonnie Devlin- Huntogi Drum master. NIkiah's Red Drum workshops run twice a year so that women interested have the chance both save up, and to plan ahead.{Upcoming dates below-classes are limited to 6 woman per workshop} In many ancient cultures around the world sacred drumming was one of the primary skills that women learned, making their own drums among them. Because it is my sincere belief that the creation of a sacred item is a very powerful and beautiful exercise, I think that every woman should have the opportunity to learn how to create their own personal tools.

Vajrasattva Meditation and Guru Yoga - Dharma Wheel The final preliminary practice is actually two practices: meditation practice on Vajrasattva, the Buddha of purification, and the undertaking guru yoga practice. These practices are unique to tantric Vajrayana Buddhism and are therefore called the unique preliminary practices. In the practice of guru yoga, all phenomena outer as well as inner should be perceived as the playfulness of our lama. We visualise that our spiritual master takes on the appearance of Padmasambhava in the sky in front of ourselves. In Tibet, Padmasambhava is known as Guru Rinpoche.

Best spots for sky-gazing at night Warm summer nights are meant for lying under the stars and watching celestial phenomena like meteor showers and moonrises. Over the next three months, mark your calendars to catch the Buck (July 14), Sturgeon (August 13), and Harvest (September 12) full moons, so named by Native Americans, as well as the Southern Delta Aquarids (peak, July 28-29) and Perseids (peak, August 12-13) meteor showers, first identified by astronomers in the 1800s. There’s only one catch: find the right spot with a superb sightline unaffected by artificial illumination. Here are four such places best suited to sky-gazing at night. An evening or two before the full moon, Boundary Bay Regional Park in Delta is the place to head.

How much does this service cost? - Fake Internet Girlfriend Posted in Fake Internet Girlfriend How fast can you setup a fake girlfriend? After you send us back our required information and pay for your first month's of service we can have your fake girlfriend ready to go in a day or two. Do your fake girlfriends ... There are more reasons to rent an online girlfriend than you may think. Spiritual Ecologies and New Cosmologies Convergence 2014 Photo by Florian Breuer Monday Sept. 22: Beginnings: Musqueam welcome; Beginnings Storytelling Circle with a diverse panel from religious and scientific backgrounds; discussion of the role of myth in society; welcome dinner. UBC First Nations Long House. 4:00 – 8:00 pm.Tuesday Sept. 23: Cosmologies: Screening the film ‘Journey of the Universe’ with Skype Introduction by the film’s producer Mary Evelyn Tucker , a response by Bruce Sanguin and discussion; Cosmos Walking Meditation in the Courtyard presented by the Earth Literacies Project; Fall Equinox Celebration; Artist Chuck Rounds will then discuss spiritual ecology, art and shamanism for the Convergence Art Exhibit Opening.

Buddhism and the God-idea Do Buddhists believe in a god? No, we do not. There are several reasons for this. The Buddha, like modern sociologists and psychologists, believed that religious ideas and especially the god idea have their origins in fear. The Buddha says: Gripped by fear people go to sacred mountains, sacred groves, sacred trees and shrines.

WITCH business Published on December 9th, 2015 | by Carolyn Elliott As I learn to run a business, I freak out sometimes over money stuff, as most of us humans do.