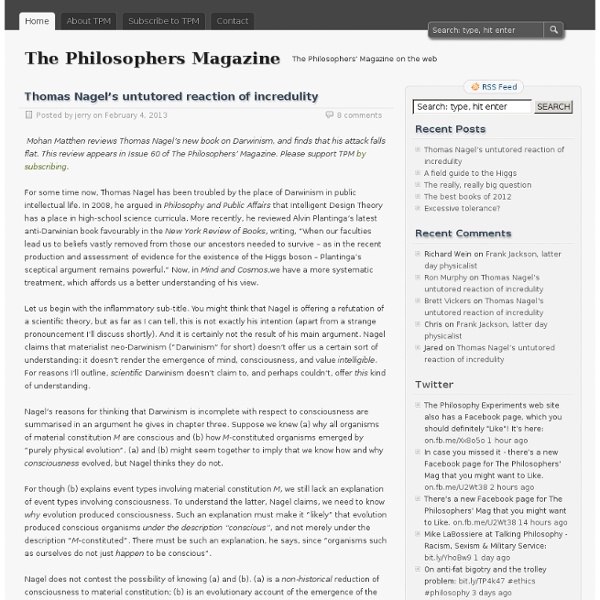 John Corvino dismantles the objections to gay marriage. This article appears in Issue 62 of The Philosophers’ Magazine. Please support TPM by subscribing. The gay-marriage movement has lately made dizzying progress. In the UK, which currently allows ‘civil partnerships’, the British and Scottish parliaments are close to recognising same-sex marriage. Last November, voters in three US states (Maine, Maryland, and Washington) extended marriage rights to same-sex couples; this year, legislators in Rhode Island, Delaware, and Minnesota have done the same, while those in Illinois, Nevada, and New Mexico have taken steps in that direction.

The Battle for Your Mind: Brainwashing Techniques Being Used On The Public By Dick Sutphen Authoritarian followers Mind Control Subliminals By Dick Sutphen Summary of Contents The Birth of Conversion The Three Brain Phases How Revivalist Preachers Work Voice Roll Technique Six Conversion Techniques 1. keeping agreements 2.physical and mental fatigue 3. increase the tension 4. Uncertainty. 5. David Chalmers David Chalmers I am a philosopher at New York University and the Australian National University. Officially I am Professor of Philosophy and co-director of the Center for Mind, Brain, and Consciousness at NYU, and also (20% time) Professor of Philosophy at ANU. I work in the philosophy of mind and in related areas of philosophy and cognitive science.

Changa by Graham Hancock One recent evening six sovereign adults, taking full responsibility for their own consciousness and their own bodies, gathered for sacred ceremony with changa, a herbal mixture rich in monamine oxidase inhibitors and infused with the forbidden fruit of DMT. I was one of those adults and the two bowls I smoked were respectively my twelfth and thirteenth journeys with inhaled DMT. I have done regular work with DMT over the years in its incarnation in the Ayahuasca brew, more than 50 journeys since 2003, but as everybody who chooses to explore these realms knows, drinking Ayahuasca is special, there is usually a fair degree of negotiation with the brew, the experience is drawn out over several hours and the loving spirit of the vine, Gaian mother of our planet, is the guiding hand. I am happy to say that the two bowls of changa I smoked a few evenings ago treated me much more gently.

THE STONE - Opinionator This is the second in a series of interviews about religion that I am conducting for The Stone. The interviewee for this installment is Louise Antony, a professor of philosophy at the University of Massachusetts at Amherst and the editor of the essay collection “Philosophers Without Gods: Meditations on Atheism and the Secular Life.” Gary Gutting: You’ve taken a strong stand as an atheist, so you obviously don’t think there are any good reasons to believe in God. But I imagine there are philosophers whose rational abilities you respect who are theists. How do you explain their disagreement with you? Are they just not thinking clearly on this topic?

The Book of Symbols: Carl Jung’s Catalog of the Unconscious by Kirstin Butler Why Sarah Palin identifies with the grizzly bear, or what the unconscious knows but doesn’t reveal. A primary method for making sense of the world is by interpreting its symbols. Philosophy Free Audio Sort by Titles Per Page 1 - 10 of 476 Titles Carl Jung’s Psychological Diagnosis Using Mandalas Mandalas have been used in many ancient cultures like Buddhism, Hinduism, Native American, Australian Aboriginal as a symbol of the universe and wholeness. Literally speaking, mandala is a geometrical form – a square or a circle – abstract and static, or a vivid image formed of objects and/or beings. It’s a cosmic diagram that reminds us of our connection with the infinite.

Tantric “Sluts” or Living Goddesses: Why it Matters With recent media revelations about ritual sex, nude yoga and “yogasms” – sex has become a hot topic in the yoga world. Well, in honour of Women’s History Month, I’m joining the fray. Because let’s face it, nothing is more juicy or salacious than the forgotten high priestesses of sex, the “debauched” yoginis of Tantra. While much conventional scholarship has designated these women as low-caste “sluts” exploited for ritual purposes, religious scholar Miranda Shaw has unearthed a very different history. Her book Passionate Enlightenment: Women in Tantric Buddhism claims these women were no mere ‘consorts’ but powerful gurus once held “in awe, reverence and obeisance”.

Guide to Philosophy on the Internet (Suber) Welcome to my collection of online philosophy resources. If you are stuck in a frame, click here to escape. If you are a frequent visitor, press reload or refresh on occasion to be sure that you are viewing the most recent version of the page, not the version cached on your hard drive from your last visit. I've marked recommended sites with a red star .