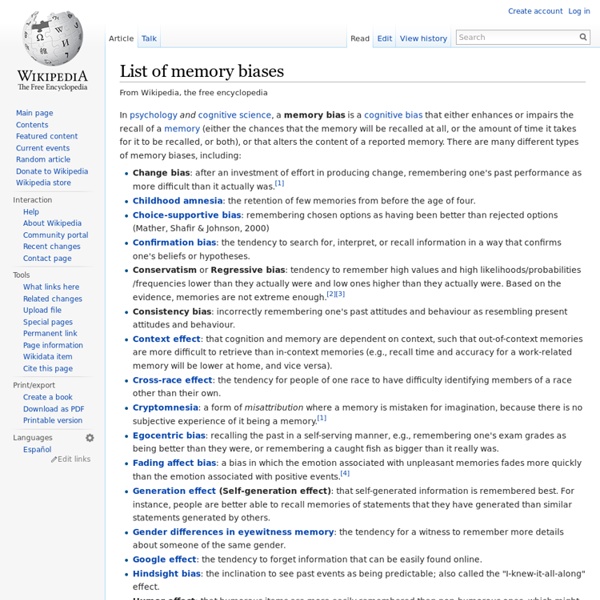 In psychology and cognitive science, a memory bias is a cognitive bias that either enhances or impairs the recall of a memory (either the chances that the memory will be recalled at all, or the amount of time it takes for it to be recalled, or both), or that alters the content of a reported memory. There are many different types of memory biases, including: See also[edit] [edit] ^ Jump up to: a b c d e Schacter, Daniel L. (1999). "The Seven Sins of Memory: Insights From Psychology and Cognitive Neuroscience". References[edit] Greenwald, A. (1980).

Prosopagnosia Research - About Prosopagnosia What is prosopagnosia? Prosopagnosia (also known as 'face blindness') refers to a severe deficit in recognizing familiar people from their face. While some people report a very selective impairment that only influences the recognition of faces, others find the deficit extends to the recognition of other stimuli, such as objects, cars, or animals. Many people also report deficits in other aspects of face processing, such as judging age or gender, recognising certain emotional expressions, or following the direction of a person's eye gaze. Finally, a substantial proportion of prosopagnosics report navigational difficulties.

Technological Singularity The technological singularity is the hypothesis that accelerating progress in technologies will cause a runaway effect wherein artificial intelligence will exceed human intellectual capacity and control, thus radically changing civilization in an event called the singularity.[1] Because the capabilities of such an intelligence may be impossible for a human to comprehend, the technological singularity is an occurrence beyond which events may become unpredictable, unfavorable, or even unfathomable.[2] The first use of the term "singularity" in this context was by mathematician John von Neumann. Proponents of the singularity typically postulate an "intelligence explosion",[5][6] where superintelligences design successive generations of increasingly powerful minds, that might occur very quickly and might not stop until the agent's cognitive abilities greatly surpass that of any human. Basic concepts Superintelligence Non-AI singularity

Prosopagnosia Animation of the fusiform area, the area damaged in prosopagnosia. Prosopagnosia /ˌprɒsəpæɡˈnoʊʒə/ (Greek: "prosopon" = "face", "agnosia" = "not knowing"), also called face blindness,[1] is a cognitive disorder of face perception where the ability to recognize faces is impaired, while other aspects of visual processing (e.g., object discrimination) and intellectual functioning (e.g., decision making) remain intact. The term originally referred to a condition following acute brain damage (acquired prosopagnosia), but a congenital or developmental form of the disorder also exists, which may affect up to 2.5% of the population.[2] The specific brain area usually associated with prosopagnosia is the fusiform gyrus,[3] which activates specifically in response to faces.

Moore's law Moore's law is the observation that, over the history of computing hardware, the number of transistors on integrated circuits doubles approximately every two years. The law is named after Intel co-founder Gordon E. Moore, who described the trend in his 1965 paper.[1][2][3] His prediction has proven to be accurate, in part because the law is now used in the semiconductor industry to guide long-term planning and to set targets for research and development.[4] The capabilities of many digital electronic devices are strongly linked to Moore's law: processing speed, memory capacity, sensors and even the number and size of pixels in digital cameras.[5] All of these are improving at roughly exponential rates as well.

Do you suffer from face blindness? Seven signs and symptoms of prosopagnosia If you read my previous post on the role of cognitive assessment in identifying uniqueness, you’ll know that I’ve worked with a lot of folks who suffer from severe difficulties recognizing faces: a condition known as prosopagnosia or face blindness. I get a lot of emails from people who take the face recognition tests on TestMyBrain.org and want to know what sorts of experiences might indicate that someone has face blindness. If you suspect you have face blindness, you may find you identify with some or many of the experiences below. 7 signs and symptoms of face blindness / prosopagnosia The list was compiled with the help of the Yahoo Faceblind group. You have failed to recognize a close friend or family member, especially when you weren’t expecting to see them.Failing to recognize someone in your immediately family, in particular, is something that people with normal face recognition rarely (if ever) experience.

Chaos theory A double rod pendulum animation showing chaotic behavior. Starting the pendulum from a slightly different initial condition would result in a completely different trajectory. The double rod pendulum is one of the simplest dynamical systems that has chaotic solutions. Chaos: When the present determines the future, but the approximate present does not approximately determine the future. Chaotic behavior can be observed in many natural systems, such as weather and climate.[6][7] This behavior can be studied through analysis of a chaotic mathematical model, or through analytical techniques such as recurrence plots and Poincaré maps. Introduction[edit]

Successful Schizophrenia Home | Articles | Resources | Stories | Weller-than-Well | Links | Search Disclaimer: Material found on the Successful Schizophrenia website is for your information only. We are not able dispense specific advice for your situation. If you are under a doctor's care, you should talk with him or her about your mental health goals and if they are not on the same page as you, ask for a referral to a doctor or counselor who is.

How To Think With Your Hands Monday, June 24, 2013 Over the past few years, while working on my forthcoming book Brilliant, I’ve been watching and taking note as a new conceptualization of intelligence takes shape in the social and biological sciences. This conceptualization involves many lines of inquiry that can be loosely grouped under the title situated cognition: the idea that thinking doesn’t happen in some abstract, disembodied space, but always in a particular brain, in a particular body, located in a particular social and physical world. The moment-by-moment conditions that prevail in that brain, that body, and that world powerfully affect how well we think and perform. One of the most interesting lines of inquiry within this perspective is known as embodied cognition: the recognition that our bodies play a big role in how we think. Physical gestures, for example, constitute a kind of back-channel way of expressing and even working out our thoughts.

The Emergence of Collective Intelligence ~Aristotle When we observe large schools of fish swimming, we might wonder who is choreographing that complex and sophisticated dance, in which thousands of individuals move in harmony as if they knew exactly what to do to produce the collective spectacle. So, what is “Emergence”? School of fishes dancing is an example of “emergence”, a process where new properties, behaviors, or complex patterns results of relatively simple rules and interactions. One can see emergence as some magic phenomena or just as a surprising result caused by the current inability of our reductionist mind to understand complex patterns. Whichever way we think, examples of emerging behaviors are abundant in nature, science, and society and are are just a fact of life.

Character Strengths and Virtues 2004 book by Christopher Peterson and Martin Seligman In the same way that the Diagnostic and Statistical Manual of Mental Disorders assesses and facilitates research on mental disorders, CSV is intended to provide a theoretical framework to assist in developing practical applications for positive psychology.[1] Definition of strengths and virtues[edit] CSV identifies six classes of virtue (i.e. "core virtues") comprising 28 measurable "character strengths".