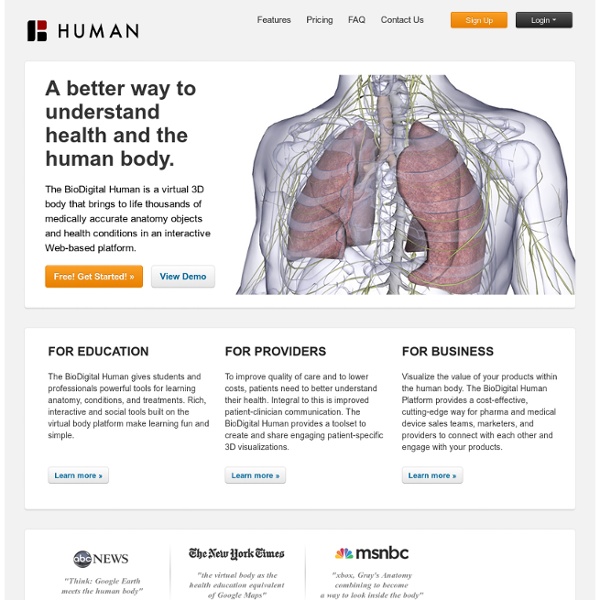 Technological Singularity The technological singularity is the hypothesis that accelerating progress in technologies will cause a runaway effect wherein artificial intelligence will exceed human intellectual capacity and control, thus radically changing civilization in an event called the singularity.[1] Because the capabilities of such an intelligence may be impossible for a human to comprehend, the technological singularity is an occurrence beyond which events may become unpredictable, unfavorable, or even unfathomable.[2] The first use of the term "singularity" in this context was by mathematician John von Neumann. Proponents of the singularity typically postulate an "intelligence explosion",[5][6] where superintelligences design successive generations of increasingly powerful minds, that might occur very quickly and might not stop until the agent's cognitive abilities greatly surpass that of any human. Basic concepts Superintelligence

Earth - How much of your body is your own? This story is part of BBC Earth's "Best of 2016" list, our greatest hits of the year. Browse the full list. • Bill Gates is actually worth $1,956• Canadian pop star Justin Bieber has five times fewer cells in his brain than in his liver• Top tennis player Serena Williams has 24.5 trillion red blood cells powering her body• Internet and social media pioneer Mark Zuckerberg’s body contains 800MB of data• President Barack Obama’s head rules his heart; his brain weighs 1.4kg, his heart just 0.4kg Welcome to The Making of Me and You, a unique, new digital interactive from BBC Earth that details extraordinary personalised facts. Just input your date of birth, sex at birth, height and weight, and choose the metric or imperial units that make most sense to you.

Visible Body 3D Anatomy Atlas - Приложения за Android в Google Play The Human Anatomy application is a SIMPLE, attractive educational quick reference app to learn about human body It contain material including:it description of each element represented below in deatil Head to Neck Human Brain: Introduction of Human Brain, Brain Structures and their Functions, Parts of the Human Brain, How Your Brain Works, Human Brain Facts, Brain disorders, Key Points Moore's law Moore's law is the observation that, over the history of computing hardware, the number of transistors on integrated circuits doubles approximately every two years. The law is named after Intel co-founder Gordon E. Moore, who described the trend in his 1965 paper.[1][2][3] His prediction has proven to be accurate, in part because the law is now used in the semiconductor industry to guide long-term planning and to set targets for research and development.[4] The capabilities of many digital electronic devices are strongly linked to Moore's law: processing speed, memory capacity, sensors and even the number and size of pixels in digital cameras.[5] All of these are improving at roughly exponential rates as well. This exponential improvement has dramatically enhanced the impact of digital electronics in nearly every segment of the world economy.[6] Moore's law describes a driving force of technological and social change in the late 20th and early 21st centuries.[7][8] History[edit]

There Are Three Surviving Elephant Species And They Have A Mammoth Inheritance There are three living species of elephants, not two, and their family tree is more complex than anyone realized, genetic analysis has revealed. The finding is important because it adds urgency to the quest to save the African forest elephant. It also represents the debut of a genetic technique that could help us understand other animals' heritage. Anatomy and Physiology animations Listed below are a collection of physiology animations and anatomy animations. These animations are intended to support text or lecture and it is important that they are not seen as stand-alone reference material. Notes: If you or your students discover any factual errors in the animations please let me know: andrew@visualization.org.uk Some of the animations can only be accessed from the university network - please contact Liz Hodgson in the LDU if you would like them on WebCT so that students can access them externally. Visual detail in Flash animations can often be magnified (click on the animation with the right mouse button and use the zoom control) Here are some animations of organs/organ systems: Cranial nerves (No text version)