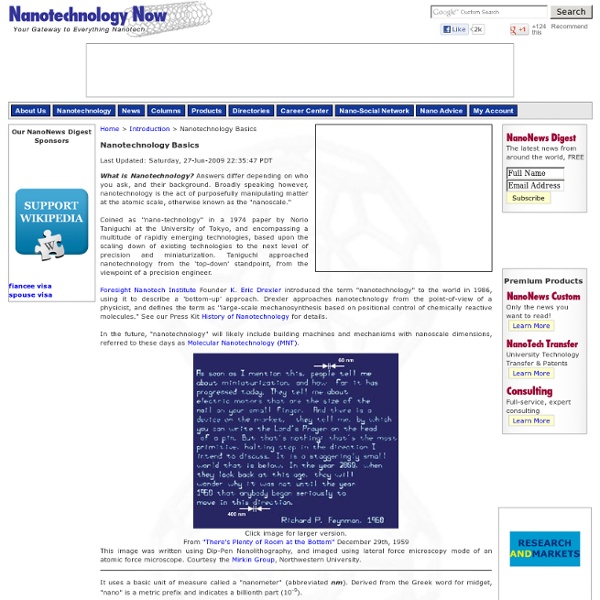 Home > Introduction > Nanotechnology Basics Nanotechnology Basics Last Updated: Friday, 14-Jun-2013 09:28:04 PDT What is Nanotechnology? Answers differ depending on who you ask, and their background. Coined as "nano-technology" in a 1974 paper by Norio Taniguchi at the University of Tokyo, and encompassing a multitude of rapidly emerging technologies, based upon the scaling down of existing technologies to the next level of precision and miniaturization. Foresight Nanotech Institute Founder K. In the future, "nanotechnology" will likely include building machines and mechanisms with nanoscale dimensions, referred to these days as Molecular Nanotechnology (MNT). Click image for larger version. This image was written using Dip-Pen Nanolithography, and imaged using lateral force microscopy mode of an atomic force microscope. It uses a basic unit of measure called a "nanometer" (abbreviated nm). There are one billion nm's to a meter. One thousandth of that is a millimeter. Related:  The Singularity

robot adapts to injury Lindsay France/University Photography Graduate student Viktor Zykov, former student Josh Bongard, now a professor at the University of Vermont, and Hod Lipson, Cornell assistant professor of mechanical and aerospace engineering, watch as a starfish-like robot pulls itself forward, using a gait it developed for itself. the robot's ability to figure out how it is put together, and from that to learn to walk, enables it to adapt and find a new gait when it is damaged. Nothing can possibly go wrong ... go wrong ... go wrong ... The truth behind the old joke is that most robots are programmed with a fairly rigid "model" of what they and the world around them are like. If a robot is damaged or its environment changes unexpectedly, it can't adapt. So Cornell researchers have built a robot that works out its own model of itself and can revise the model to adapt to injury. "Most robots have a fixed model laboriously designed by human engineers," Lipson explained.

Artificial Robotic Hand Transmits Feeling To Nerves Astro Teller has an unusual way of starting a new project: He tries to kill it. Teller is the head of X, formerly called Google X, the advanced technology lab of Alphabet. At X’s headquarters not far from the Googleplex in Mountain View, Calif., Teller leads a group of engineers, inventors, and designers devoted to futuristic “moonshot” projects like self-driving cars, delivery drones, and Internet-beaming balloons. To turn their wild ideas into reality, Teller and his team have developed a unique approach. It starts with trying to prove that whatever it is that you’re trying to do can’t be done—in other words, trying to kill your own idea. As Teller explains, “Instead of saying, ‘What’s most fun to do about this or what’s easiest to do first?’ The ideas that survive get additional rounds of scrutiny, and only a tiny fraction eventually becomes official projects; the proposals that are found to have an Achilles’ heel are discarded, and Xers quickly move on to their next idea.

Home - Smarthouse Astronomy Magazine - Interactive Star Charts, Planets, Meteors, Comets, Telescopes Silicon Chips Wired With Nerve Cells Could Enable New Brain/Machine Interfaces It's reminiscent of Cartman's runaway Trapper Keeper notebook in that long-ago episode of South Park, but researchers at the University of Wisconsin-Madison may be scratching the surface of a new kind of brain/machine interface by creating computer chips that are wired together with living nerve cells. A team there has found that mouse nerve cells will connect with each other across a network of tiny tubes threaded through a semiconductor material. It's not exactly clear at this point how the nerve cells are functioning, but what is clear is that the cells seem to have an affinity for the tiny tubes, and that alone has some interesting implications. To create the nerve-chip hybrid, the researchers created tubes of layered silicon and germanium that are large enough for the nerve cells' tendrils to navigate but too small for the actual body of the cell to pass through. What isn't clear is whether or not the cells are actually communicating with each other they way they would naturally.

Why are past, present, and future our only options? But things get awkward if you have a friend. (Use your imagination if necessary.) Low blow, Dr. Dave. Low blow... But seriously, I always figured if there was more than one dimension of time, that moving "left" or "right" would be the equivalent of moving to a parallel universe where things were slightly different. That is to say, maybe time really is 2 dimensional, but for all the reasons you mention, we're normally only aware of one of them—and for the most part, the same one that most of the people we meet are aware of. But take, say, a schizophrenic person—maybe they're tuned in differently; moving sideways through time instead of forward... or maybe moving through (and aware of) both simultaneously. They can't form coherent thoughts because they're constantly confronted with overlapping and shifting realities. I dunno... that's all just speculation, of course, but I find that thought fascinating.

Land, Air and Sea - Museum of Strange and Wonderful Vehicles Bad Astronomy Well now, this is an interesting discovery: astronomers have found what looks like a "super-Earth" – a planet more massive than Earth but still smaller than a gas giant – orbiting a nearby star at the right distance to have liquid water on it! Given that, it might – might – be Earthlike. This is pretty cool news. We’ve found planets like this before, but not very many! Now let me be clear: this is a planet candidate; it has not yet been confirmed. The star is called HD 40307, and it’s a bit over 40 light years away (pretty close in galactic standards, but I wouldn’t want to walk there). Massive planets tug on their star harder, so they’re easier to find this way. In this case, HD 40307 was originally observed a little while back by HARPS, and three planets were found. We don’t know how big the planet is, unfortunately. That’s exciting because of the prospect for life. Here’s a diagram of the system as compared to our own: Image credits: ESO/M. Related Posts:

Finding the Top Bot: High School Students (and Their Robots) Take the Prize at Tech Challenge [Slide Show] NEW YORK—Despite the rain and cold this past weekend, dozens of robots took the field to compete in the New York City FIRST Tech Challenge (FTC) regional championship at the Javitz Center in Manhattan. The tournament tested the skills and determination of 48 teams of high school students who have spent the past several months building, programming and otherwise preparing their bots to face off in a friendly game of HotShot! The objective of HotShot! This being a tournament developed and hosted by Dean Kamen's FIRST (For Inspiration and Recognition of Science and Technology) organization, the competition involved more than the ball game itself. At the start of every round each of the four robots in play relied on software and sensors to track the location of their goal, line up shots and, hopefully, score some points—without any intervention from the human players. FTC organizers emphasize that the program's goals extend well beyond even technology.

Artificial Intelligence - Volume 1: Chatbot NetLogo Model Produced for the book series "Artificial Intelligence"; Author: W. J. powered by NetLogo view/download model file: Chatbot.nlogo This model implements two basic chatbots - Liza and Harry. The model makes use of an extension to NetLogo called "re" for regular expressions. First press the setup button in the Interface - this will load the rules for each chatbot. The Interface buttons are defined as follows:- setup: This loads the rules for each chatbots.- chat: This starts or continues the conversation with the chatbot that was selected using the bot chooser. The Interface chooser and switch is defined as follows:- bot: This sets the chatbot to the Liza chatbot, the Harry chatbot or Both.- debug-conversation: If this is set to On, debug information is also printed showing which rules matched. Harry seems to do a bit better at being paranoid than Liza does at being a Rogerian psychotherapist. Try out the different chatbots by changing the bot chooser.