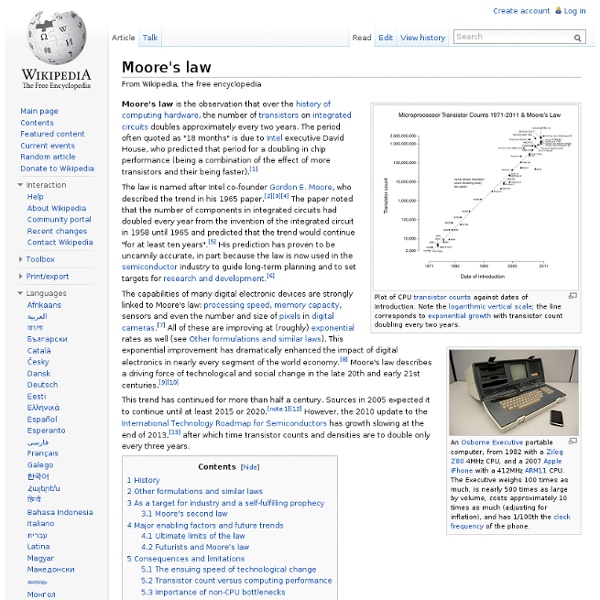 Moore's law is the observation that, over the history of computing hardware, the number of transistors on integrated circuits doubles approximately every two years. The law is named after Intel co-founder Gordon E. Moore, who described the trend in his 1965 paper.[1][2][3] His prediction has proven to be accurate, in part because the law is now used in the semiconductor industry to guide long-term planning and to set targets for research and development.[4] The capabilities of many digital electronic devices are strongly linked to Moore's law: processing speed, memory capacity, sensors and even the number and size of pixels in digital cameras.[5] All of these are improving at roughly exponential rates as well. This exponential improvement has dramatically enhanced the impact of digital electronics in nearly every segment of the world economy.[6] Moore's law describes a driving force of technological and social change in the late 20th and early 21st centuries.[7][8] History[edit]

Giving Great Presentations In Easy Steps When was the last time you attended a presentation and thought "That was fantastic! I really enjoyed listening to the speaker and learned something today"? It doesn't happen often enough, because most people who present give mediocre talks at best. But it shouldn't be like this. Presenting information or data, whether it be one on one to your boss, or at an international conference to an audience of thousands, is very much part of modern business and academic life. But such occasions are feared by most people, and even people who are outwardly confident in their work can fall apart at the podium and give the most mediocre presentations simply through anxiety, nervousness and lack of preparation.

Technological Singularity The technological singularity is the hypothesis that accelerating progress in technologies will cause a runaway effect wherein artificial intelligence will exceed human intellectual capacity and control, thus radically changing civilization in an event called the singularity.[1] Because the capabilities of such an intelligence may be impossible for a human to comprehend, the technological singularity is an occurrence beyond which events may become unpredictable, unfavorable, or even unfathomable.[2] The first use of the term "singularity" in this context was by mathematician John von Neumann. Proponents of the singularity typically postulate an "intelligence explosion",[5][6] where superintelligences design successive generations of increasingly powerful minds, that might occur very quickly and might not stop until the agent's cognitive abilities greatly surpass that of any human.

Three-dimensional integrated circuit In electronics, a three-dimensional integrated circuit (3D IC) is a chip in which two or more layers of active electronic components are integrated both vertically and horizontally into a single circuit. The semiconductor industry is pursuing this technology in many different forms, but it is not yet widely used; consequently, the definition is still somewhat fluid. 3D ICs vs. 3D packaging[edit] Notable 3D chips[edit] In 2004, Intel presented a 3D version of the Pentium 4 CPU.[1] The chip was manufactured with two dies using face-to-face stacking, which allowed a dense via structure.

Milan's Vertical Forest Wednesday, 12 October 2011 GreenMuze Staff Milan’s Vertical Forest from Stefan Boeri Architects. The Bosco Verticale (Vertical Forest) will be the greenest building in Milan when completed, which is one of Europe’s most polluted cities. Testicular cancer Testicular cancer is cancer that develops in the testicles, a part of the male reproductive system. Not all lumps on the testicles are tumors, and not all tumors are malignant (cancerous). There are many other conditions, such as testicular microlithiasis, epididymal cysts, and appendix testis (hydatid of Morgagni), which may be painful but are non-cancerous. Testicular cancer has one of the highest cure rates of all cancers with an average five-year survival rate of 95%.[1] If the cancer has not spread outside the testicle, the 5-year survival is 99% while if it has grown into nearby structures or has spread to nearby lymph nodes, the rate is 96% and if it has spread to organs or lymph nodes away from the testicles, the 5-year survival is around 74%.[2] Even for the relatively few cases in which cancer has spread widely, chemotherapy offers a cure rate of at least 80%.[3] Testicular cancer takes place in the testicles.

Chaos theory A double rod pendulum animation showing chaotic behavior. Starting the pendulum from a slightly different initial condition would result in a completely different trajectory. The double rod pendulum is one of the simplest dynamical systems that has chaotic solutions. Memristor Leon Chua has more recently argued that the definition could be generalized to cover all forms of two-terminal non-volatile memory devices based on resistance switching effects[2] although some experimental evidence contradicts this claim, since a non-passive nanobattery effect is observable in resistance switching memory.[5] Chua also argued that the memristor is the oldest known circuit element, with its effects predating the resistor, capacitor and inductor.[6] Background[edit] Conceptual symmetries of resistor, capacitor, inductor, and memristor. In his 1971 paper, Chua extrapolated a conceptual symmetry between the nonlinear resistor (voltage vs. current), nonlinear capacitor (voltage vs. charge) and nonlinear inductor (magnetic flux linkage vs. current). He then inferred the possibility of a memristor as another fundamental nonlinear circuit element linking magnetic flux and charge. Memristor definition and criticism[edit]

Rocket Racing League The prototype Rocket Racer, a modified Velocity SE climbing to 10,000 feet on its first full flight, October 29, 2007 at the Mojave Spaceport. The Rocket Racing League is a racing league that plans to use rocket-powered aircraft to race a closed-circuit air racetrack. Founded in 2005, the league made its first public flights in 2008 and is working to begin regular racing seasons. Choosing a Dissertation Topic? Ask These 4 Questions. Searching for the perfect doctoral dissertation topic? Consider these four fundamental questions. Your dissertation is the culmination of your doctoral degree. Whether you’re pursuing your PhD degree online or on campus, choosing a dissertation topic is exciting, but it can also be difficult. While it’s essential to select a doctoral dissertation topic you’re passionate about, it’s also essential to ensure it passes a research “litmus test” that answers four fundamental questions.

Ultrafast Chips that Run on Light: Nanoswitch Breakthrough Brings Us Closer When you think about microprocessors and chipsets and circuit boards, if you’re like me, you think in metaphors: tiny green-and-silver cities comprising dozens of chips — some with billions of transistors — on copper trace-linked highways, channeling information as digital 1′s and o’s through electrical signals on a microscopic scale. For this, I blame Tron. Now — keeping with the yes-I’m-an-’80s-child Tron metaphor — imagine that “city” instead channeling light.

Google Commits $100M To Help Finance Residential Solar Installs With SunPower Fresh off its agreement to purchase up to 407 MW of wind power for its Iowa data center, Google today announced that it has committed $100 million to create a new fund to help finance the purchase of residential solar installations with SunPower Corporation. The fund, which will also include $150 million from SunPower, is meant to enable a scheme that is similar to what other residential solar companies currently offer: The fund will purchase the solar panels homeowners will be able to lease these solar systems at a cost that is lower than their normal electricity bill. SunPower’s current program has brought solar panels to about 20,000 U.S. households, and the company expects that this new fund will add “thousands” more. SunPower makes the panels itself and handles the installation for homeowners. This marks Google’s 16th renewable energy investment and its third in residential rooftop solar.