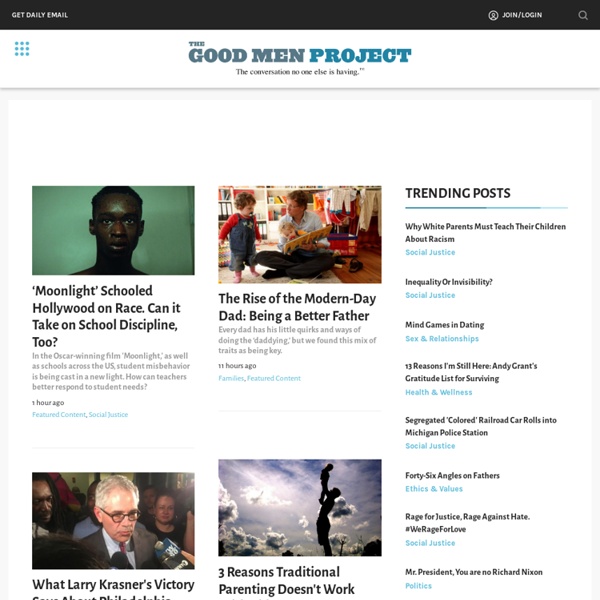 Why The Good Men Project Sucks « The World Is Watching Trigger warning for rape/sexual assault. The Good Men Project has been getting on my nerves for the last fortnight or so, and I’ve struggled to really put together some coherent thoughts about it. But there’s a couple of blog posts by co-founder Tom Matlack that I just have to take issue with. He first wrote “The Feminist I Used To Know“, and then “In The Beginning, It Was About Storytelling“. I’ll start with the first.

Ways To Live Online: Nothing Is Free When you first find yourself on the internet, the temptation to download is immense. In my early days online, way back in university, I would seek out music and programs, but not films and select ‘save as’, as a lot of other people did (and still do). It was the days of dial up and because of a quirk of our local subscription package, our house had a free, albeit very narrow pipe to the internet. We would each have the connection for a night to get what we wanted. And what did we get?

Omtronica Blog The Men of Strength Club "My active involvement in this revolutionary program has been the sole catalyst for my maturation into a self-aware and confident young man." -Aaron Harris, MOST Club member Men Can Stop Rape's youth development program, the Men of Strength Club, is the country’s premier primary violence prevention program for mobilizing young men to prevent sexual and dating violence. The Men of Strength Club, or MOST Club, provides young men with a structured and supportive space to build individualized definitions of masculinity that promote healthy relationships.

We asked 6 Guys…does weight REALLY matter?, As women, we can be our biggest supporters and critics. But, what about the men? I asked six guys in various points of the relationship game, does weight really matter? Patrick, in a relationship: Although weight can have an influence on the initial attraction, once you get to know someone it will become less of a factor in the level of interest as you get to know the other person. This is a two way street though, guys worry about their appearance and weight too. Naturally, we want our partners to be healthy but we also understand how genetics can play a role.

Paradigm Shifting Hell No, HUGO! As bad as things were, she didn’t want “out” — and felt shocked and unfathomably betrayed by our my unilateral decision to kill us both. -Hugo Schwyzer in his own words [Jan 3, 2011]See: What You Need To Remember, What You Need To Forget […] [cache] Here, Hugo’s account of what happens directly contradicts what he recounted to Gina Messina-Dysert of The Feminist Theologian in their interview available on Youtube where he stated that she had told him multiple times that she did, in fact, “want out.” How Hugo Schwyzer chooses to describe rape When I found her, she smelled of sex and sweat and alcohol; as she climbed unsteadily into my truck, I noticed rope marks on her wrists and bruises on her arms and throat. She’d been with a dealer, and had paid a debt in a way that young female addicts sadly often pay it — but things had clearly gotten uglier than she’d expected.

Related:
Related:  Acting   -  ANIMATING & ACTING   -  acting   -  voice acting   -  Acting Coach - How To Choose The Best One   -  The Zeitgeist Movement Global   -  stickK   -  LifeScoop | Tips for a connected lifestyle.   -  Multidisciplinary Association for Psychedelic Studies   -  Longplayer   -  Spells and Magic for the Sorcerer - Love Spells, Black Magic, White Magic Spells   -  YOUR PREMIERE CONSUMER BIPOLAR D   -  NeuroSoup | Harm Reduction, Drug Education, & Spirituality   -  Decision making site that gives advice to help you make smart choices..   -  Cosmos, Consciousness & Meaning TV Series on PBS - Closer to Truth   -  Practical Ethics   -  Grist | A planet that doesn’t burn, a future that doesn’t suck   -  Decision Maker   -  Natural Society | Revolutionize Your Health - Naturally   -  Your Brain On Porn | Evolution has not prepared your brain for today's Internet porn   -  Living Earth Simulator will simulate the entire world | ExtremeTech   -  Meisner technique - Wikipedia, the free encyclopedia   -  5 Creepy Forms of Mind Control You're Exposed to Daily | Cracked.com   -  The Lozt Boyz: How I Study Animation   -  The Dark Mountain Project   -  Waking Times - Where Revolution and Evolution Unite   -  12 Rules for Being a Human Being   -  A Basic Buddhism Guide: Buddhism and the God-idea   -  The Science of Procrastination and How to Manage It, Animated | Brain Pickings   -  Sacred Geometry International - The World Is Our Classroom   -  The Philosophers Magazine | The Philosophers' Magazine on the web   -  BQO | Big Questions Online   -  The Science of “Intuition” | Brain Pickings   -  How To Design a Lucky Life   -  Do we live in a computer simulation? UW researchers say idea can be tested   -  What Are Your Values? - Decision-Making Skills from MindTools.com