The best visuals to explain the Singularity to senior executives 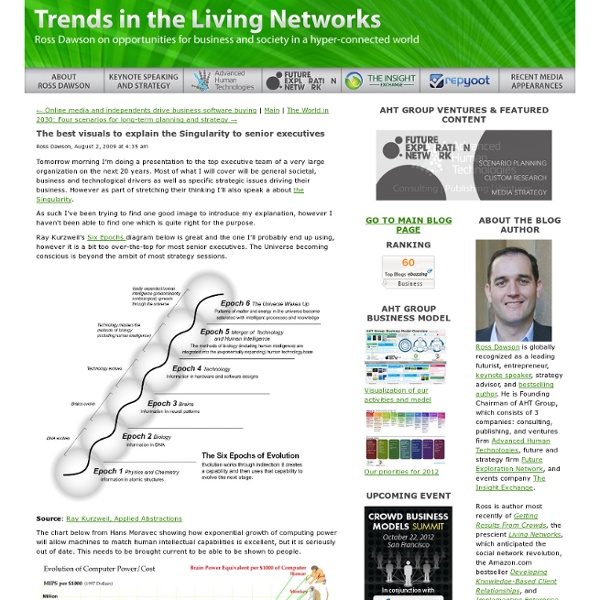 Tomorrow morning I’m doing a presentation to the top executive team of a very large organization on the next 20 years. Most of what I will cover will be general societal, business and technological drivers as well as specific strategic issues driving their business. However as part of stretching their thinking I’ll also speak a about the Singularity. As such I’ve been trying to find one good image to introduce my explanation, however I haven’t been able to find one which is quite right for the purpose. Ray Kurzweil’s Six Epochs diagram below is great and the one I’ll probably end up using, however it is a bit too over-the-top for most senior executives. Source: Ray Kurzweil, Applied Abstractions The chart below from Hans Moravec showing how exponential growth of computing power will allow machines to match human intellectual capabilities is excellent, but it is seriously out of date. Source: Hans Moravec, When will computer hardware match the human brain? Source: Ray Kurzweil, Tropophilia Related:  Exponential Change - Technological Singularity • value network

Vernor Vinge on the Singularity Vernor Vinge Department of Mathematical Sciences San Diego State University (c) 1993 by Vernor Vinge (This article may be reproduced for noncommercial purposes if it is copied in its entirety, including this notice.) The original version of this article was presented at the VISION-21 Symposium sponsored by NASA Lewis Research Center and the Ohio Aerospace Institute, March 30-31, 1993. Within thirty years, we will have the technological means to create superhuman intelligence. Is such progress avoidable? What is The Singularity? The acceleration of technological progress has been the central feature of this century. There may be developed computers that are "awake" and superhumanly intelligent. The first three possibilities depend in large part on improvements in computer hardware. What are the consequences of this event? I think it's fair to call this event a singularity ("the Singularity" for the purposes of this paper). But as time passes, we should see more symptoms. [8] Drexler, K.

Is your CEO worth his (her) pay? The Pricing and Valuing of Top Managers! It is true, as many others have pointed out, that CEO pay has been increasing at rates far higher than pay for those lower in the pay scale, for much of the last three decades. In the graph below, I look at the evolution of average CEO pay since 1992, broken down broadly by sector: Since 1992, the annual compounded increase in CEO pay of 7.64% has been higher than the growth in revenues, earnings or other profitability measures. Of all the drivers of CEO pay changes over time, none seems to be as powerful as stock market performance, as is clear in this graph going back further to 1965: While there has been much talk about the ratio of CEO pay to that of an average employee, and that ratio has indisputably jumped over the last three decades, I found t, for S&P 500 companies, using 2012-2014 data to be a more useful statistic. Determinants of CEO Pay Not only is CEO pay high, but it varies across time and across companies. A Framework for analyzing the value added by a CEO The End Game

Infinity Point Will Arrive by 2035 Latest Eray Ozkural December 23, 2013 During writing a paper for the 100 Year Starship Symposium, I wished to convince the starship designers that they should acknowledge the dynamics of high-technology economy, which may be crucial for interstellar missions. Thus motivated, I have made a new calculation regarding infinity point, also known as the singularity. According to this most recent revision of the theory of infinity point, it turns out that we should expect Infinity Point by 2035 in the worst case. Infinity Point was the original name for the hypothetical event when almost boundless amount of intelligence would be available in Solomonoff's original research in 1985 (1), who is also the founder of mathematical Artificial Intelligence (AI) field. The original theory arrives at the Infinity Point conclusion by making a few simple mathematical assumptions, and solving a system of equations. Therefore, I updated the Infinity Point Hypothesis, using Koomey's Law instead in two papers. .

Who should pay when your robot breaks the law? Since it's inevitable I'll take the bullet and bring up Asimov's three laws of robotics: 1. A robot may not injure a human being or, through inaction, allow a human being to come to harm. 2. 3. 0. Ike was horrified when people started talking about applying his three laws to real robots. The CEDA Community model Pt.2: ‘Engagement’ & ‘Permission’ in Social Learning I’ve been developing the CEDA model this week, looking at how we develop vibrant Social Learning communities. It has two purposes: firstly, to be used in strategy, to help shape our organisational approach and, secondly, to diagnose the health of a functioning community, to understand what’s working and what may need support. There are four parts to the model (you can read all about it here), ‘Curation‘, ‘Engagement‘, ‘Debate‘ and ‘Application‘. Four things we need to consider. But there are another four parts of the model to consider: either amplifying or confounding factors. For ‘Curation‘, we look at ‘Technology‘. Over the next few days, we will explore the other factors: for ‘Debate‘, it’s about ‘Trust‘, do individuals believe that they will be treated fairly? These are by far not the only factors at play, but i wanted to gather together (curate) a structured framework that organisations can work around. In the second stage of the CEDA model we explore ‘engagement’ and ‘permission’.

Planetary Alchemy by Alan Smale Let’s fix Mars. Of course, the Red Planet is spectacular just as it is. Images from forty years of Mars missions have revealed its stark beauty and rose-tinted rocky grandeur. In its southern hemisphere Mars has ancient cratered highlands similar to the Moon’s, while much of the north consists of plains lower in altitude and geologically much younger. The giant shield volcano of Olympus Mons rises 24 km, three times as high as Everest, above the surrounding plains. Other canyons, networks of river valleys, stream beds, gullies, channels, layered deposits, deltas and alluvial fans provide strong evidence for flowing water, crater lakes and salty seas in a much warmer and wetter period of Mars’s history. There’s a lot to like about Mars. Some time in the future we might decide we need that dusty red real estate. Such a stunning transformation may be easier than you imagine. Keeping Pressurized and Keeping Warm Down to basics. First, the air pressure. Next: Temperature. Fixing Mars.

Ethan Roland: The 8 Forms of Capital Martenson: Welcome to this Peak Prosperity podcast. I am your host Chris Martenson. Do you ever wonder about resiliency and how to increase it in your life? We recently began using a new model for adding depth and structure to the way we think about building and the deploying capital, and it comes to us from a couple of practitioners from the field of permaculture. Roland: Great to be on. Martenson: So, we have not had a chance to talk since we first used your material at the Rowe Seminar this year and I have to tell you, based on the feedback forms, it was a huge hit. Roland: Capital is this thing…it was almost like a bad word that was around when I was growing up. So we just began to think about and see—what else were we exchanging? As we began to see these flow, we noticed that everybody really seems to focus on financial capital, as if it is the only form, but it turns out that we cannot eat money—even gold. Martenson: Fascinating. Martenson: Oh, absolutely. Martenson: Birth?

The future of technology will "pale" the previous 20 years Future - Science & Environment - Global resources stock check If we fail to correct current consumption trends, then when will our most valuable natural resources run out? As the world’s population soars, so does its consumption, and as a result we are stretching many of our natural resources to their limits. Of course, the assumption is that human ingenuity and market forces will prevent supplies from running out: we could create better or cheaper extraction methods, recycle materials, find alternatives to non-renewable sources, or reduce consumption. The hope is that talks at the Rio+20 Earth summit will help to steer the world economy on a more sustainable path. But the clock is already ticking, and if the unthinkable happens and we fail to correct current trends, then when can we expect our most valuable resources to run out? If you want to see the data we used to construct this infographic, you can find it here [PDF].