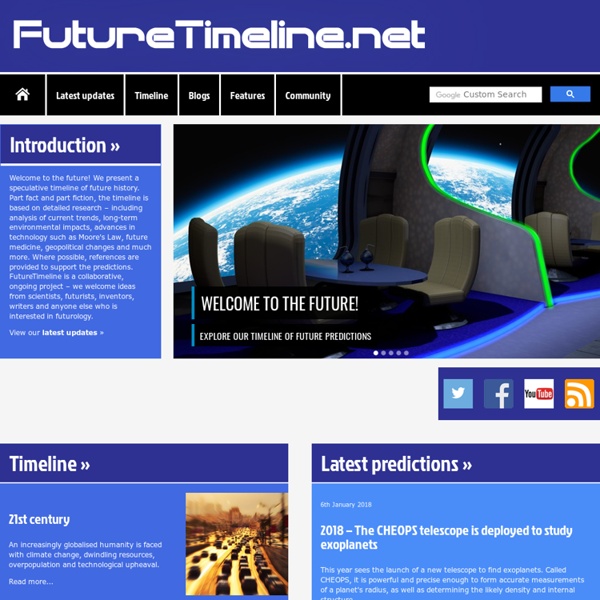 Welcome to the future! Below, you will find a speculative timeline of future history. Part fact and part fiction, the timeline is based on detailed research that includes analysis of current trends, long-term environmental changes, advances in technology such as Moore's Law, future medical breakthroughs, the evolving geopolitical landscape and more. Where possible, references have been provided to support the predictions. We also have a blog covering the latest news and breakthroughs. FutureTimeline is an ongoing, collaborative project that is open for discussion – we welcome ideas from scientists, futurists, inventors, writers and anyone else interested in future trends.

Cryptographers chosen to duke it out in final fight - physics-math - 13 December 2010 A competition to find a replacement for one of the gold-standard computer security algorithms used in almost all secure, online transactions just heated up. The list of possibilities for Secure Hash Algorithm-3, or SHA-3, has been narrowed down to five finalists. They now face the onslaught of an international community of "cryptanalysts" – who will analyse the algorithms for weaknesses – before just one is due to be selected as the winner in 2012. 6 Insane Coincidences You Won't Believe Actually Happened America's Freak Luck During the Battle of Midway The Battle of Midway may be remembered as one of the most spectacular naval battles in history and one of the huge turning points in the Pacific theater, but it started out as a pure clusterfuck for the Americans. Despite going into battle with most of Japan's game plan in their pocket thanks to American codebreakers/Bothan spies, the U.S.

Our Fabulous Future: Corporate America’s Great Tech-Utopia Movies The best way to predict the future, as Alan Kay famously said, is to invent it. For decades, however, well-known technology companies have tried an easier approach: filming it. They’ve done so in the form of short movies featuring mocked-up versions of the wondrous technologies that will be everyday realities for the consumers of tomorrow. (Many of the tomorrows in question — 1960, 1976, 1986, 1999, 2o04 — have since come and gone.) These films tend to have a self-important feel, as if paying actors to pretend to interact with make-believe gadgets was a vital part of bringing said gadgets to market.

Laser Crosswalk Saves Pedestrians From a Painful Death When the light turns red, a huge laser wall projecting apparitions of crossing pedestrians spans across the crosswalk. The concept is designed to keep crossing pedestrians safe from any overzealous drivers who otherwise might have ran the red light. Link [via] What is the singularity? Picture yourself trying to explain the experience of streaming a movie to William Shakespeare. First, you'd have to explain movies. Then you'd have to explain TVs (or computers, or tablets or mobile phones, or maybe even Google Glass). Then you'd probably have to explain the Internet. And electricity.

Religion no excuse for promoting scientific ignorance - science-in-society - 08 February 2011 The US constitution allows people to believe what they want. However, it does not require universities to promote ignorance LAST month, the University of Kentucky in Lexington paid $125,000 to settle a religious discrimination lawsuit brought by astrophysicist Martin Gaskell. Gaskell claimed the university did not appoint him director of their student observatory because of his Christian faith, despite him being the best candidate. typing lessons This is keybr.com, a web application that will help you teach touch typing. Touch typing is typing without using the sense of sight to find the keys. A person possessing touch typing skills will know their location on the keyboard through muscle memory. It can improve any individual's typing speed and accuracy dramatically. This is a short tutorial that will explain how does this application work. You can use the left and right arrow keys to navigate through these slides.

Why immersive virtual reality is the next generation of gaming: part 1 FOV2GO (credit: USC/MxR) It’s now obvious that immersive virtual reality is finally back in the consumer market — with a vengeance. Especially with the recent advent of FOV2GO, a free DIY portable fold-out iPhone and Android viewer that turns the smartphone screen into a 3-D VR system. You can create one with foamboard and 2 cheap plastic lenses, and downloadable software lets you create your own virtual worlds or environments to display. FOV2GO for iPhone (credit: USC/MxR) (There’s also an iPad3 version.)