Search for Meaning (Yr 11RE) 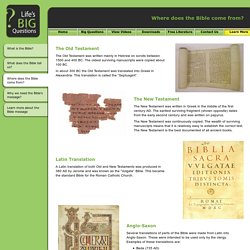 By Dan Lietha and Stacia Byers The universe and all in it screams, 'There is a God! 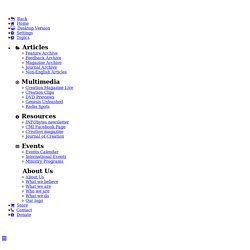 ' (Romans 1:18-21), but the universe cannot tell us how it was made, its history, how we should live our lives, or about when its Creator came to Earth. For that, God has given us His Word, the Bible. Because of the Word of God, we know that God created all things in six normal-length days, that it was originally a 'very good' place, and that the first man, Adam, disobeyed the Creator, thus corrupting the entire creation (Genesis 1-3; Romans 8:20-22). We know that Jesus Christ (the Creator) came to Earth to save His people from their sins, died, was buried, and rose again on the third day, according to the Scriptures (1Corinthians 15:3-4). Social Teaching - Australian Catholic Social Justice Council. The ACSJC has prepared a series of discussion guides on principles of the Church’s social teaching and some important encyclicals related to this topic. 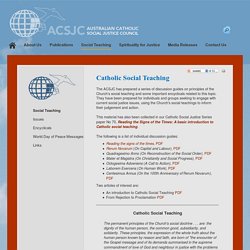 They have been prepared for individuals and groups seeking to engage with current social justice issues, using the Church's social teachings to inform their judgement and action. This material has also been collected in our Catholic Social Justice Series paper No 70, Reading the Signs of the Times: A basic introduction to Catholic social teaching. HOW TO HAVE A HAPPY & MEANINGFUL LIFE with His Holiness the Dalai Lama at Happiness and Its Causes18. The Four Keys to a Meaningful Life.

Could pursuing meaning be the path to true happiness? 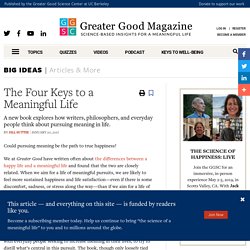 We at Greater Good have written often about the differences between a happy life and a meaningful life and found that the two are closely related. When we aim for a life of meaningful pursuits, we are likely to feel more sustained happiness and life satisfaction—even if there is some discomfort, sadness, or stress along the way—than if we aim for a life of pleasure alone. In fact, seeking happiness directly may actually backfire, while pursuing meaning may increase our health and well-being.

Now a new book takes a stab at figuring out just what pursuing a meaningful life entails. In The Power of Meaning, journalist Emily Esfahani Smith draws from the texts of great writers and philosophers—Emerson, Aristotle, Buddha, and Victor Frankl, for example—as well as interviews with everyday people seeking to increase meaning in their lives, to try to distill what’s central in this pursuit. 1. 2. 3. Curriculum of Giving - Giving, education, and the meaningful life.

Beyond Belief: Why Australians don't go to church, but call upon God in times of crisis. By Chloe Brant Posted Most Australians claim they believe in God or some kind of "higher power" and yet fewer than one in 10 of us attend church every week. 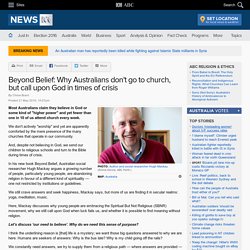 We don't actively "worship" and yet are apparently comforted by the mere presence of the many churches that operate in our community. And, despite not believing in God, we send our children to religious schools and turn to the Bible during times of crisis. In his new book Beyond Belief, Australian social researcher Hugh Mackay argues a growing number of people, particularly young people, are abandoning religion in favour of a different kind of spirituality — one not restricted by institutions or guidelines. Existentialism. Existentialism is a catch-all term for those philosophers who consider the nature of the human condition as a key philosophical problem and who share the view that this problem is best addressed through ontology. 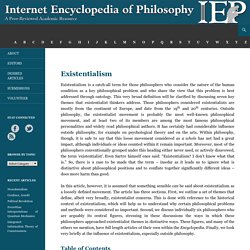 This very broad definition will be clarified by discussing seven key themes that existentialist thinkers address. Those philosophers considered existentialists are mostly from the continent of Europe, and date from the 19th and 20th centuries. Outside philosophy, the existentialist movement is probably the most well-known philosophical movement, and at least two of its members are among the most famous philosophical personalities and widely read philosophical authors.

It has certainly had considerable influence outside philosophy, for example on psychological theory and on the arts. Within philosophy, though, it is safe to say that this loose movement considered as a whole has not had a great impact, although individuals or ideas counted within it remain important. The Philosophy of Happiness in Life (+ Aristotle's View) Happiness. 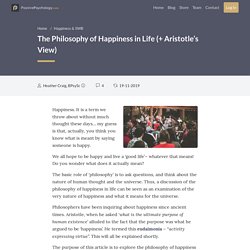 It is a term we throw about without much thought these days… my guess is that, actually, you think you know what is meant by saying someone is happy. We all hope to be happy and live a ‘good life’– whatever that means! Do you wonder what does it actually mean? The basic role of ‘philosophy’ is to ask questions, and think about the nature of human thought and the universe. Wellbeing Article The search for meaning. Venter on the meaning of life. Nearly 70 years ago, the famed Austria-born physicist Erwin Schrödinger — he of the maybe-dead cat — delivered a lecture at Trinity College in Dublin, Ireland. 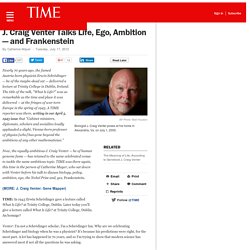 The title of the talk, "What Is Life? " was as remarkable as the time and place it was delivered — at the fringes of war-torn Europe in the spring of 1943. How To Find Meaning In Life, Backed By Research. Human beings certainly gravitate to religion and it seems we all have an tendency to believe in some sort of karma. 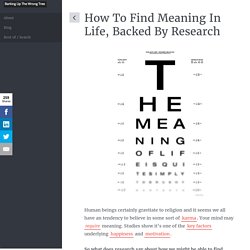 Your mind may require meaning. What Jogging Through a Cemetery Taught Me About the Meaning of Life. A couple of summers ago, my wife Linda and I rented a house for a few weeks on Long Island. 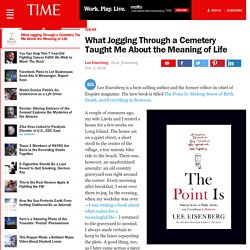 The house sat on a quiet street, a short stroll to the center of the village, a ten-minute bike ride to the beach. There was, however, an unadvertised amenity: an old country graveyard was right around the corner. Every morning after breakfast, I went over there to jog. By Sharing Death on the Web, Dying May Not Feel So Alone. Steven Petrow writes the Civilities column about LGBT/straight social dilemmas for The Washington Post and is the author of five etiquette books.

Lisa Bonchek Adams is not necessarily a household name, but she may well be remembered for having transformed how we understand death and dying. The 45-year-old mother of three died last week after a very public battle with breast cancer. For eight years after her initial diagnosis, Adams shared her unvarnished story with her 15,000 Twitter followers and untold numbers of blog and Facebook readers. Among her last tweets: “Find a bit of beauty in the world today. Share it. MEGGTM.2. Man's Search for Meaning Revisited. Over the last week I caught up on two month's worth of newspapers and magazines. Read over of a couple of days, this fall's news seems especially dark. Terrorism, ugly politics, random killings and environmental degradation. We move through our days knowing that shocking things will happen and that we will learn about them in real time. It was a rough fall and higher education was not spared as universities continued to weather intense flashes of conflict.

Searching for meaning. Many areas of psychology are great at answering such questions as how stress influences mood or why depression can lead to substance abuse. But what if you want answers broader than a diagnosis or a neurochemical explanation for why your brain does what it does? What if you want to know how to lead a fuller, richer life, not just change a problematic behavior? You might consider existential-humanistic psychology, which seeks to give clients a greater awareness of how their constellation of pleasures, worries, thrills and anxieties all come together to form their experience of living. What can existential-humanistic psychology offer? The Question of God . Other Voices . Viktor Frankl. Like Freud a citizen of Vienna and a practicing psychotherapist, Dr. Viktor Frankl also became a university professor and prolific author. His most widely read work is Man's Search For Meaning, a keenly observed account of his experiences in the Nazi death camps during Word War II.

Originally intended for limited private circulation, the slim book has since been translated into 24 languages. In the two excerpts included here, Frankl first ponders the mystery of transcendent experience amid extreme suffering, then explores the true nature of human moral freedom. Frankl's concentration camp experiences profoundly influenced his life's work after the war, leading to his development of logotherapy, a new clinical approach to helping patients rediscover meaning in their lives.

Man's Search for Meaning. What's the rush. Confessions Of An Atheist. Confessions of an atheist Belief in God is something most of us either take for granted or simply don't think about. But for others the question of faith is a central concern. Michael Goulder, an Anglican clergyman for nearly 30 years, explains what led him to become an atheist. IN 1981 I wrote to the Bishop of Birmingham to resign my Orders and became an atheist.

Not a dogmatic atheist proclaiming that there is no God (how could I know that?) , but a straightforward atheist confessing that I do not believe in God. New Internationalist. Learn Philosophy, from the Ancients to the Moderns, with 350 Animated Videos. Videos - Happiness and its causes. The Search For Meaning. Often it is so terrible we wonder how we can ever survive it. Search For Meaning In Life (SOCIAL PSYCHOLOGY) - IResearchNet. A Happy Life May Not Be a Meaningful Life. Psychiatrist and Holocaust survivor Viktor Frankl once wrote, “Life is never made unbearable by circumstances, but only by lack of meaning and purpose.” For most people, feeling happy and finding life meaningful are both important and related goals. Why a meaningful life might matter more than happiness - Health - ABC News.

Living a Meaningful Life. The tree of life. It's cool to be kind. The art of Mindfulness. Why we need more time, and less clothes. Where you stumble, there is your treasure. We live in empowering times. The stuff of life. The science of everlasting happiness. The packaged self 2. The Meaningful Life. The art of subtraction. Terminal Materialism. Shopping for our future selves. Meaningful things. Happy times. Frankenstein of social media. Bonfire of our vanities. A rational approach to happiness. A life not defined by work. A Creative Mind. Emma Galloway slow food. Losing our religion. Is happiness Overrated. Why a meaningful life might matter more than happiness - Health - ABC News.

Emily Esfahani Smith: There's more to life than being happy.