74 Of The Tiniest, Most Tasteful Tattoos Ever 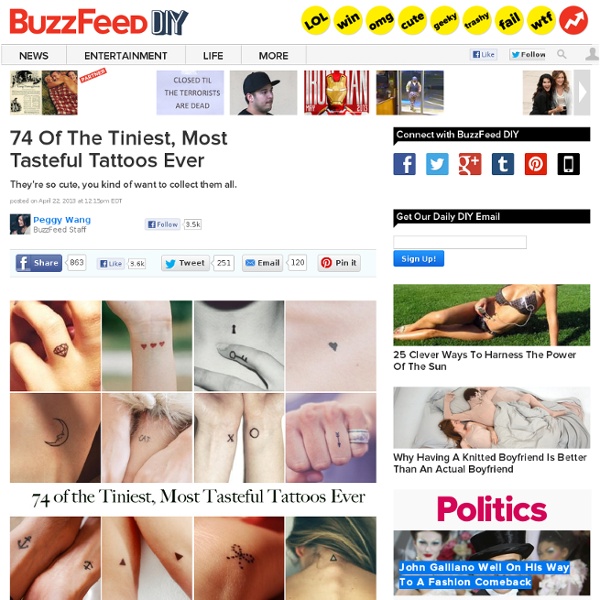 Mario Ceroli “Maestrale”, glass sculpture by Mario Ceroli. marioceroli.it via: not shaking the grass The Civil War Pterosaur shot no one should see!”- Must read! by Lu Paradise • March 19, 2010 • 49 Comments • 40,443 views The most obfuscated “pterodactyl” photo in history? Article also in Deutsch, Espanol, Français, Nederlands, & 中文 and also available as a Fully Illustrated PPS Powerpoint Presentation 1,6 MB here! There’s a very old photo that no one can see! The dude map: How Americans refer to their bros “It seems safe to report that dude has supplanted totally as the word most often uttered by American youth,” claimed Richard Hill in his 1994 paper on the history of the word “dude.” That might be true, but as it turns out, “dude” is more popular in some parts of the United States than others. In other areas of the country, people say “pal,” “buddy,” and other colloquial vocatives—nouns that usually refer to a person. The map above shows the geographical concentration of a few such words. If you click the buttons, you’ll notice that “dude” is the most widespread. Others are heavily concentrated in particular regions, like “pal” in the north.

Spiritual Tattoos Tattooist Jondix spent years learning about Oriental art from Thailand and North India. Today, he is a recognized artist who has specialized in Asian-inspired tattoos, many of these related with holy themes and inked in black and grey. Warning: This post contains images with nudity. Viewer discretion is advised. 15 Beautiful Free Online Magazines I have always loved magazines, from the glossy pages of my first subscriptions as a toddler, to the refined pages of a Kinfolk magazine. But magazines tend to be pricey, and not very eco-friendly. While I miss the texture and smell of printed paper, and the ability to carry, collect and keep print publications, I have found in free online magazines a way to reconcile my love for magazines with my small budget.

We Are the Other People Oberon (Otter) Zell The following is an Article published three or four years ago in Green Egg. "Ding-dong!" goes the doorbell. Is it Avon calling? Or perhaps Ed McMahon with my three million dollars? Coloring Book For Grown-Ups That Mocks Adult Life (II) POYKPAC's Coloring for Grown-Ups is back in the headlines after new images were leaked online. These images from the darkly-humorous coloring book poke fun at issues like contraception, sex, and depression. We previously covered the book here. Adult coloring books are enjoying a boom, and can be found among the top five best-selling books on Amazon. Shea Butter Lotions, Products - Moisturize Dry Skin Shea butter has been around forever — and for good reason. This serious hydrator has been used for centuries to moisturize skin (and hair, too). It's essentially a triglyceride (a fatty acid) that’s crushed out of the nut of the African shea tree, then heated up in large vats, so that the softening oils make their way to the top. Unlike other butters, shea butter quickly emulsifies when it hits the skin and is subtly warmed up from an elevated body temperature — that's why it effortlessly seeps into the skin, and doesn’t rest on the surface. Not only is it a superstar skin softener, it also helps heal and calm skin, thanks to essential nutrients such as omega-6 fatty acids and linoleic acid. What's more, it acts as an emollient and has anti-inflammatory properties (perfect for sensitive skin prone to irritation).

1970s Men’s Fashion Ads You Won’t Be Able To Unsee The 1970s must have taken place on a different planet. These photos of men’s fashions from that decade leave us drowning in astounding mustard knits, garish patterns, high waists, way-too-skimpy briefs, and other fashion faux pas that defy description 40 years later. As synthetics fell in price, casual menswear was suddenly available to many young men looking to cut loose. Since polyester doesn’t require ironing, the “wash and wear” revolution is in full view of these models with their skin-tight threads.

public relations - artforum.com / scene & herd Left: Left: Fulya Erdemci , curator of the 13th Istanbul Biennial. Right: Andrea Phillips , co-organizer of the biennial's ten-month public program, “Public Alchemy.” (All photos: Kaelen Wilson-Goldie) Emerald Tablet of Hermes Sacred-Texts Esoteric Index Previous Next The Emerald Tablet of Hermes History of the Tablet History of the Tablet (largely summarised from Needham 1980, & Holmyard 1957) This Woman Re-Creating Celebrity Instagrams Is the Hero We Need If we're being completely honest with ourselves, we've all tried to look as hot as any given celeb does in their Instagram posts. Like, I know I have. But — alarmingly enough — it never seems to work!

10 Supergroups That Were Less Than the Sum of Their Parts This week sees the release of Amok, the debut album by Thom Yorke’s much-heralded Atoms for Peace project. The album sets Yorke with an unlikely cast of collaborators: Flea, long-time producer Nigel Godrich, REM drummer Joey Waronker, and a Brazilian multi-instrumentalist by the name of Mauro Refosco. They’re a supergroup, basically, no matter how much Yorke decries the term. And like many supergroups, they prove less than the sum of their parts — getting the idea of putting a bunch of successful musicians together to work is more difficult than it seems.