Learn Philosophy, from the Ancients to the Moderns, with 350 Animated Videos 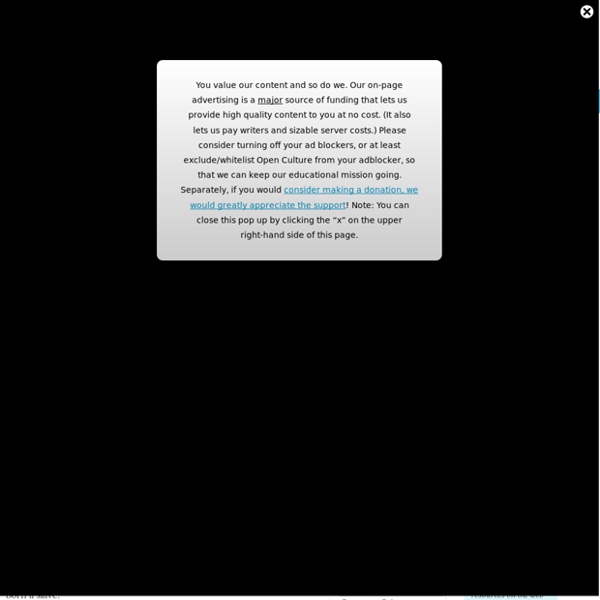 Philosophy is not an idle pursuit of leisured gentlemen and tenured professors, though the life circumstances of many a philosopher might make us think otherwise. The foremost example of a privileged philosopher is Marcus Aurelius, famous expositor of Stoicism, and also, incidentally, Emperor of Rome. Yet we must also bear in mind that Epictetus, the other most famous expositor of Stoicism, whom Aurelius quotes repeatedly in his Meditations, was born a slave. Against certain tendencies of modern thinking, we might hazard to believe that both men shared enough common human experience to arrive at some universal principles fully applicable to everyday life. Stoicism, after all, is nothing if not practical. Consider, for example, the emperor’s advice below—how challenging it might be for anyone, and how beneficial, not only for the individual, but—as Aurelius makes plain—for everyone. The material is out there. Related Content: 135 Free Philosophy eBooks

The Four Keys to a Meaningful Life Could pursuing meaning be the path to true happiness? We at Greater Good have written often about the differences between a happy life and a meaningful life and found that the two are closely related. When we aim for a life of meaningful pursuits, we are likely to feel more sustained happiness and life satisfaction—even if there is some discomfort, sadness, or stress along the way—than if we aim for a life of pleasure alone. In fact, seeking happiness directly may actually backfire, while pursuing meaning may increase our health and well-being. Now a new book takes a stab at figuring out just what pursuing a meaningful life entails. In The Power of Meaning, journalist Emily Esfahani Smith draws from the texts of great writers and philosophers—Emerson, Aristotle, Buddha, and Victor Frankl, for example—as well as interviews with everyday people seeking to increase meaning in their lives, to try to distill what’s central in this pursuit.

Oxford's Free Introduction to Philosophy: Stream 41 Lectures You don't need to go to Oxford to study philosophy. Not when it will come to you. Above, find a playlist that features 41 lectures from Oxford's course called General Philosophy. Here's what it has to offer: A series of lectures delivered by Peter Millican to first-year philosophy students at the University of Oxford. The lectures comprise of the 8-week General Philosophy course, delivered to first year undergraduates.

Why Study Philosophy? 'To Challenge Your Own Point of View' When did your formal education in philosophy start? I didn’t think I was going to study philosophy. I also loved science, and took out lots of books about science as a kid, and, oh gosh, I ruined my mother’s kitchen by trying to do do-it-yourself chemistry experiments. There were all kinds of things that interested me. One of the things about philosophy is that you don’t have to give up on any other field. Whatever field there is, there’s a corresponding field of philosophy.

Introduction to Philosophy/The Branches of Philosophy The Branches of Philosophy[edit] Western philosophy can be divided into six branches that have assumed various importance over time. Traditionally metaphysics sets the questions for philosophy. Epistemology asks how do we know? Living a Meaningful Life Source: rosemary sword Although we might think happiness – or the pursuit of it – will make us feel better about ourselves and our lives, research indicates that it’s actually finding greater meaning in our lives that, at the end of the day – or our lives – is more fulfilling. In Emily Esfahani Smith’s fascinating article, “There is More to Happiness than Being Happy” ( she reports, “While happiness is an emotion felt in the here and now, it ultimately fades away, just as all emotions do; positive affect and feelings of pleasure are fleeting. The amount of time people report feeling good or bad correlates with happiness but not at all with meaning. Meaning, on the other hand, is enduring. It connects the past to the present to the future.”

Metaphysics and the limits of science Is physical science – as some people say – omnicompetent? Can it (that is) answer all possible questions? If, for instance, we ask why human beings sometimes behave so appallingly – or how we know that they shouldn't behave so appallingly; or what is the best way to deal with inner conflicts; or whether depression is a physical or a mental trouble – can we look to the physical sciences for an answer? How would we even start to hunt for it there? This idea that science is an all-purpose oracle dealing with every kind of question is surely very odd. Yet that promise was confidently launched in the 1930s and has proved a very powerful myth.

If Philosophy Won’t Diversify, Let’s Call It What It Really Is Instead, we ask those who sincerely believe that it does make sense to organize our discipline entirely around European and American figures and texts to pursue this agenda with honesty and openness. We therefore suggest that any department that regularly offers courses only on Western philosophy should rename itself “Department of European and American Philosophy.” This simple change would make the domain and mission of these departments clear, and would signal their true intellectual commitments to students and colleagues. We see no justification for resisting this minor rebranding (though we welcome opposing views in the comments section to this article), particularly for those who endorse, implicitly or explicitly, this Eurocentric orientation. Some of our colleagues defend this orientation on the grounds that non-European philosophy belongs only in “area studies” departments, like Asian Studies, African Studies or Latin American Studies.

Stoicism and Pain Management: 4 Techniques Practiced By Marcus Aurelius This is a guest post by Donald Robertson. Donald is a cognitive-behavioral psychotherapist, trainer, and writer. Robertson has been tirelessly researching Stoicism and applying it in his work for twenty years. He is also the author of the remarkable new book on Marcus Aurelius, How To Think Like a Roman Emperor The Roman emperor Marcus Aurelius knew about using Stoicism to cope with chronic pain and illness. Why a meaningful life might matter more than happiness - Health - ABC News "Whatever good or bad fortune may come our way, we can always give it meaning and transform it into something of value." Hermann Hesse, Siddhartha. What is the most meaningful thing that happened to you this year? What inspired you, and gave you strength and resilience? For me, it was the response to a story one of my sons and I wrote earlier in the year. It was our way of trying to make sense of something that made no sense at all.

This Is Water: David Foster Wallace on Life On September 12, 2008, David Foster Wallace took his own life, becoming a kind of patron-saint of the “tortured genius” myth of creativity. Just three years prior to his suicide, he stepped onto the podium at Kenyon College and delivered one of the most timeless graduation speeches of all time — the only public talk he ever gave on his views of life. The speech, which includes a remark about suicide by firearms that came to be extensively discussed after DFW’s own eventual suicide, was published as a slim book titled This Is Water: Some Thoughts, Delivered on a Significant Occasion, about Living a Compassionate Life (public library).

A Happy Life May Not Be a Meaningful Life Psychiatrist and Holocaust survivor Viktor Frankl once wrote, “Life is never made unbearable by circumstances, but only by lack of meaning and purpose.” For most people, feeling happy and finding life meaningful are both important and related goals. But do happiness and meaning always go together? It seems unlikely, given that many of the things that we regularly choose to do – from running marathons to raising children – are unlikely to increase our day-to-day happiness. Recent research suggests that while happiness and a sense of meaning often overlap, they also diverge in important and surprising ways. Maximizing AO2 marks… At the moment I am working on strategies to maximize AO2 marks, both for the new GCSE and the new A Level. Inspired by Lucy Beng’s recent Facebook post and the discussion it generated, I thought I would blog about my ideas here. Over time I have come round to advising all my students to take a conclusion-first approach, avoiding the twin traps of just describing different points of view and running out of time before developing a proper conclusion. In the very limited time available in both GCSE and A Level exams, I think that students are more likely to score higher marks by arguing a case from the outset than they would by waiting until after they have gone through two different points of view.

Philosophy can teach children what Google can’t – and Ireland knows it At the controls of driverless cars, on the end of the telephone when you call your bank or favourite retailer: we all know the robots are coming, and in many cases are already here. Back in 2013, economists at Oxford University’s Martin School estimated that in the next 20 years, more than half of all jobs would be substituted by intelligent technology. Like the prospect of robot-assisted living or hate it, it is foolish to deny that children in school today will enter a vastly different workplace tomorrow – and that’s if they’re lucky.