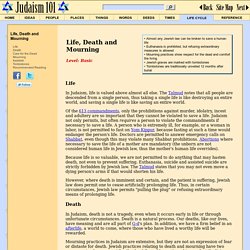 Judaism not only permits, but often requires a person to violate the commandments if necessary to save a life. Mourning-ceremonies. It is believed that when a person dies, their spirit goes back to the Dreaming Ancestors in the land if the correct ceremonies rituals are conducted. 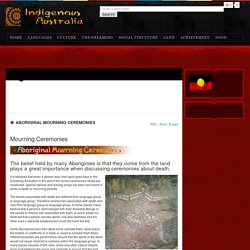 Special dances and wailing songs are seen and heard in times of death or mourning periods. The beliefs associated with death are different from language group to language group. Therefore ceremonies associated with death also vary from language group to language group. In some places it was believe that a person's spirit merged with their Ancestral Beings or the sacred or totemic site associated with them. In some areas it is believed that a person has two spirits, one was harmless and the other lived a separate existence but could still harm the first. Some Aboriginies bury their dead some cremate them, some place the bodies on platforms or in trees or caves to conceal them.Many different practises are performed to ensure that the spirits of the dead would not cause mischief or sadness within the language group. 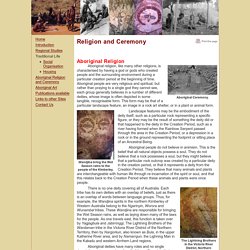 Aboriginal religion, like many other religions, is characterised by having a god or gods who created people and the surrounding environment during a particular creation period at the beginning of time. Aboriginal people are very religious and spiritual, but rather than praying to a single god they cannot see, each group generally believes in a number of different deities, whose image is often depicted in some tangible, recognisable form. This form may be that of a particular landscape feature, an image in a rock art shelter, or in a plant or animal form.

Wandjina bring the Wet Season rains to the people of the Kimberley. Aboriginal people do not believe in animism. The Lightning Brothers in the Victoria River District, Northern Territory. There is no one deity covering all of Australia. Aboriginal deities have many roles and no single description or term can describe all of these.

Namarrgun, the Lightning Man in the Kakadu region. Ancestral Beings. Antam Sanskaar - The Sikh Funeral Ceremony and Rites. Death and Dying - Magazine Web Edition > January/February/March 2007. The Hindu view of the grand departure and it's sacred rites of passage "Lead me from darkness to light, from death to immortality. 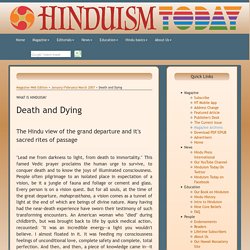 " This famed Vedic prayer proclaims the human urge to survive, to conquer death and to know the joys of illuminated consciousness. The Buddhist Society: Buddhist Funerals. Buddhism originated in North West India some 2,500 years ago, with the enlightenment of Siddhartha Gautama, who became known as the Buddha (the Awakened One). 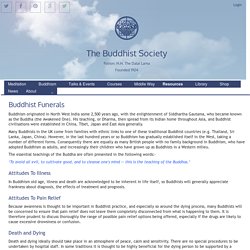 His teaching, or Dharma, then spread from its Indian home throughout Asia, and Buddhist civilisations were established in China, Tibet, Japan and East Asia generally. Many Buddhists in the UK come from families with ethnic links to one of these traditional Buddhist countries (e.g. Thailand, Sri Lanka, Japan, China). However, in the last hundred years or so Buddhism has gradually established itself in the West, taking a number of different forms. Consequently there are equally as many British people with no family background in Buddhism, who have adopted Buddhism as adults, and increasingly their children who have grown up as Buddhists in a Western milieu.

Islamic Rituals for the Dying and Deceased. This is part of our Diverse Expression of Grief series, written by Hilary Dockray. 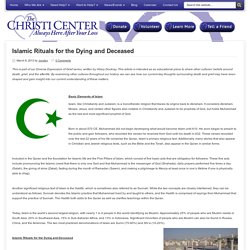 This article is intended as an educational piece to share other cultures’ beliefs around death, grief, and the afterlife. By examining other cultures throughout our history, we can see how our current-day thoughts surrounding death and grief may have been shaped and gain insight into our current understanding of these matters. Basic Elements of Islam Islam, like Christianity and Judaism, is a monotheistic religion that traces its origins back to Abraham. It considers Abraham, Moses, Jesus, and certain other figures also notable in Christianity and Judaism to be prophets of God, but holds Muhammad as the last and most significant prophet of God. Born in about 570 CE, Muhammad did not begin developing what would become Islam until 610. Included in the Quran and the foundation for Islamic life are the Five Pillars of Islam, which consist of five basic acts that are obligatory for followers.

Reflections. Traditions and Customs. When death occurs, there are many Jewish traditions, customs and rituals that individuals use as a guide and follow relating to the caring and preparation of the body pre-burial, the actual burial and service at the cemetery, along with the weeklong mourning period (or "shiva") that follows. 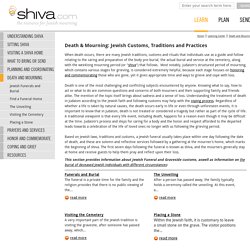 Most notably, Judaism's structured period of mourning, which contains various stages for grieving, is considered extremely helpful, because each stage focuses on honoring and commemorating those who are gone, yet it gives appropriate time and ways to grieve and cope with loss. Death is one of the most challenging and conflicting subjects encountered by anyone. Knowing what to say, how to act or what to do are common questions and concerns of both mourners and their supporting family and friends alike. Rites of Transition: Hindu Death Rituals - Beliefnet. Excerpted with permission of Hinduism Today. 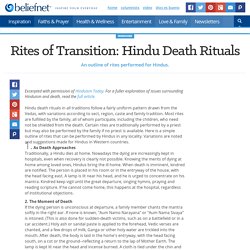 For a fuller exploration of issues surrounding Hinduism and death, read the full article. Hindu death rituals in all traditions follow a fairly uniform pattern drawn from the Vedas, with variations according to sect, region, caste and family tradition. Most rites are fulfilled by the family, all of whom participate, including the children, who need not be shielded from the death. Certain rites are traditionally performed by a priest but may also be performed by the family if no priest is available.

Here is a simple outline of rites that can be performed by Hindus in any locality. The Buddhist Society: Buddhist Funerals. Catholic Ritual at the Time of Death. Throughout the Church’s history, Christian burial has been an integral part of Catholic life. 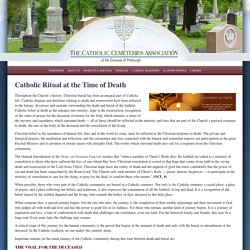 Inside Out Theory - Stages of Grief. Coping with Grief and Loss: Understanding the Grieving Process. Dealing with loss, grief or an emotional crisis. Times of emotional crisis and upset often involve some kind of loss. 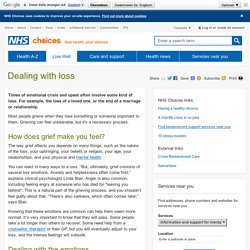 For example, the loss of a loved one, or the end of a marriage or relationship. Most people grieve when they lose something or someone important to them. Grieving can feel unbearable, but it's a necessary process. How does grief make you feel? Lifeline Australia home 13 11 14 - Crisis Support and Suicide Prevention - Lifeline. Dr. Christina Hibbert. Dealing With Grief: The 5 Stages of Grief Dealing with grief is no easy task. Coping with Grief and Loss: Understanding the Grieving Process. Beyondblue - Home. HelpGuide.org - Trusted guide to mental, emotional & social health. Grieflink. Grief and Loss Resources. The Center for Complicated Grief seeks to improve the lives of people with complicated grief through a comprehensive program of outreach, education, training, and research. The Centers activities focus on four key areas:Raising awareness of CG in the general population so that individuals suffering with prolonged, complicated grief, as well as their family and friends, will recognize the condition and learn where to find help.Working to disseminate CG-related assessment and therapeutic tools to practicing clinicians such as grief counselors and health professionals.Developing curricula for graduate, post-masters and post-doctoral education of mental health professionals.Fostering innovative research to continuously improve complicated grief treatment and treatment dissemination.