The Nature of the Self: Experimental Philosopher Joshua Knobe on How We Know Who We Are 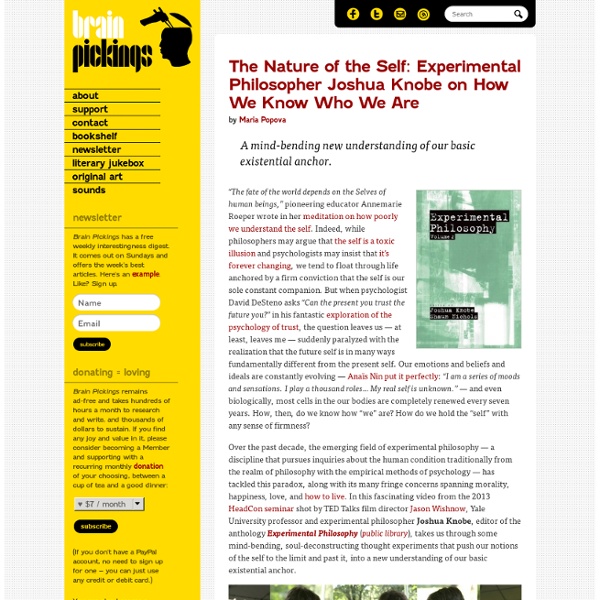 by Maria Popova A mind-bending new understanding of our basic existential anchor. “The fate of the world depends on the Selves of human beings,” pioneering educator Annemarie Roeper wrote in her meditation on how poorly we understand the self. Over the past decade, the emerging field of experimental philosophy — a discipline that pursues inquiries about the human condition traditionally from the realm of philosophy with the empirical methods of psychology — has tackled this paradox, along with its many fringe concerns spanning morality, happiness, love, and how to live. Though the full talk is remarkable in its entirety and is well worth the watch, here is what I find to be Knobe’s most poignant pause-giver: One specific thing [has] really been exploding in the past couple of years and this is experimental philosophy work on the notion of the self. Donating = Loving Bringing you (ad-free) Brain Pickings takes hundreds of hours each month. Brain Pickings has a free weekly newsletter.

15 styles of Distorted Thinking 15 styles of Distorted Thinking Filtering: You take the negative details and magnify them while filtering out all positive aspects of a situation. Polarized Thinking: Things are black or white, good or bad. You have to be perfect or you're a failure. There is no middle ground. Checklist for Hidden Anger Procrastination in the completion of imposed tasks. I Need You to Fight for My Students | I sat in the corner of the coffee shop swirling my raspberry mocha, waiting for it to cool. Looking up, I was greeted by a familiar face. A former student who held a piece of my heart. He had graduated the year before and the story he told me shook loose the tears. “Mrs. He went on to talk about how he was getting by in the great big world with his great big high school diploma. In recent months, two students have shown up at my classroom door with tears in their eyes, kicked out of their houses. Students in our schools are broken. Ask teachers who love their students. Sometimes they need you. Our schools need you to fight for our students. Because have you ever tried to learn with your stomach empty? Did you ever try to comprehend grammar when all you think about is how you put your alcoholic mother to bed the night before? What about understanding algebra when your dad invited you to get high with him just yesterday? Common Core. It’s not a fight to elevate standards. No. I don’t know. But…

50 Common Cognitive Distortions 3. Negative predictions. Overestimating the likelihood that an action will have a negative outcome. 4. Underestimating coping ability. Underestimating your ability cope with negative events. 5. Thinking of unpleasant events as catastrophes. 6. For example, during social interactions, paying attention to someone yawning but not paying the same degree of attention to other cues that suggest they are interested in what you’re saying (such as them leaning in). 7. Remembering negatives from a social situation and not remembering positives. 8. Believing an absence of a smiley-face in an email means someone is mad at you. 9. The belief that achieving unrelentingly high standards is necessary to avoid a catastrophe. 10. Believing the same rules that apply to others should not apply to you. 11. For example, I’ve made progress toward my goal and therefore it’s ok if I act in a way that is inconsistent with it. 12. For example, believing that poor people must deserve to be poor. 13. 14. It’s not. 15. 16.

A Senator Asks A Panel Of Experts To Defend Walmart. It Gets Awkward. Bernie Sanders:: Thank you, madam vice-chair. One of the interesting aspects of discussions about the economy and income inequality inside the Beltway, as opposed to back home in the real world, is the very different tone that we hear. The idea that anybody could suggests that we are not seeing massive increases in income and wealth inequality is beyond my comprehension. If you go outside of the Beltway, there is no debate about that. The idea that anyone could suggest that today the economy for the middle class is anywhere near where it used to be is beyond comprehension, I think, to the vast majority of the American people. The reality that we are seeing today is that middle class in this country is disappearing, median family income is going down. As Secretary Reich pointed out, between 2009 and 2012 95% of all new income generated in this country went to the top 1%. Does anybody on that panel, I'm going to ask that question in a moment, think that makes moral sense or economic sense?

Goethe on the Psychology of Color and Emotion Color is an essential part of how we experience the world, both biologically and culturally. One of the earliest formal explorations of color theory came from an unlikely source — the German poet, artist, and politician Johann Wolfgang von Goethe, who in 1810 published Theory of Colors (public library; public domain), his treatise on the nature, function, and psychology of colors. Though the work was dismissed by a large portion of the scientific community, it remained of intense interest to a cohort of prominent philosophers and physicists, including Arthur Schopenhauer, Kurt Gödel, and Ludwig Wittgenstein. One of Goethe’s most radical points was a refutation of Newton’s ideas about the color spectrum, suggesting instead that darkness is an active ingredient rather than the mere passive absence of light. YELLOWThis is the color nearest the light. It appears on the slightest mitigation of light, whether by semi-transparent mediums or faint reflection from white surfaces.

List of cognitive biases Systematic patterns of deviation from norm or rationality in judgment The loss aversion cognitive bias has been shown in monkeys Cognitive biases are systematic patterns of deviation from norm and/or rationality in judgment. Although the reality of most of these biases is confirmed by reproducible research,[2][3] there are often controversies about how to classify these biases or how to explain them.[4] Gerd Gigerenzer has criticized the framing of cognitive biases as errors in judgment, and favors interpreting them as arising from rational deviations from logical thought.[5] Explanations include information-processing rules (i.e., mental shortcuts), called heuristics, that the brain uses to produce decisions or judgments. There are also controversies over some of these biases as to whether they count as useless or irrational, or whether they result in useful attitudes or behavior. Belief, Decision-making and behavioral biases[edit] Social biases[edit] Memory errors and biases[edit] [edit]

The Myth Behind Public School Failure by Dean Paton Until about 1980, America’s public schoolteachers were iconic everyday heroes painted with a kind of Norman Rockwell patina—generally respected because they helped most kids learn to read, write and successfully join society. Such teachers made possible at least the idea of a vibrant democracy. Since then, what a turnaround: We’re now told, relentlessly, that bad-apple schoolteachers have wrecked K-12 education; that their unions keep legions of incompetent educators in classrooms; that part of the solution is more private charter schools; and that teachers as well as entire schools lack accountability, which can best be remedied by more and more standardized “bubble” tests. What led to such an ignoble fall for teachers and schools? The beginning of “reform” To truly understand how we came to believe our educational system is broken, we need a history lesson. You could make a strong argument that the current campaign against public schools started with that single TV episode. Resistance