Rory Sutherland: Perspective is everything 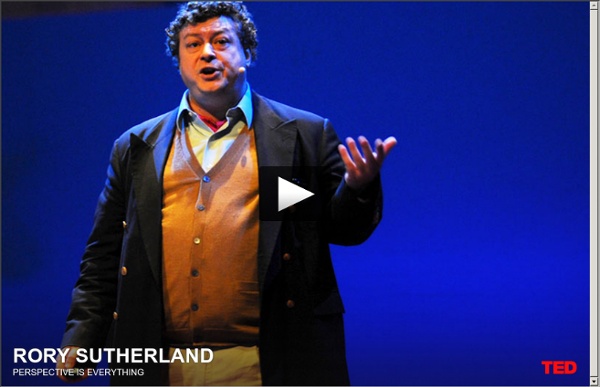 Design’s Next Frontier: Nudging Consumers Into Making Better Life Choices The following is adapted from an Artefact white paper. The full version may be downloaded here. Recent advances in neuroscience and behavioral economics, cognitive psychology and anthropology are helping us better understand how our brains work and how decision-making takes place. This is a departure from the conventional wisdom of 20th-century economists and policy makers who tended to think of people as rational creatures who would weigh their options and make rational decisions. Now we are starting to amass a body of evidence built from hundreds of scientific studies documenting dozens of human cognitive biases. Designers have been influencing behavior for a long time. Shaping and informing opinions is still incredibly important. While this recent knowledge of how our brains work is a significant step forward, we are still at the very beginning of learning how to do persuasive design effectively. Let us consider a design scenario that shows the default bias at work.

10 Ways Children show us the way to True Happiness Chogyam Trungpa, a famous Buddhist teacher, wished people a “Cheerful Birthday.” He didn’t like the word, “Happy.”“Happiness,” he’d say, is a temporary, conditional state of mind. 1. 2. 3. 4. 5. 6. 7. 8. 9. 10. Want just our best? Get our weekly newsletter. About Waylon Lewis Waylon Lewis, founder of elephant magazine, now elephantjournal.com & host of Walk the Talk Show with Waylon Lewis, is a 1st generation American Buddhist “Dharma Brat." Recent Trackbacks Before It's News [...] Behavioral economics summit for startups Letting Go: What it means. How to do it “Renunciation is not giving up the things of the world, but accepting that they go away.” ~ Shunryu Suzuki Roshi Meditation is a practice in letting go. In meditation ten thousand things arise, and we let them be. A kaleidoscopic cacophony of sensations, thoughts and reveries arise and vanish—fleeting specters in the Cartesian Theater of the mind. We have hopes and expectations for what each moment of meditation will be like: “I will stay alert, focused, calm, and peaceful.” Why practice letting go? “The reason for learning… is not so that you can sit around and meditate. We meditate in order to learn how to let go in our daily lives. “Clinging” is another word for “holding on.” Sometimes the Buddhist message about craving, clinging and attachment is misunderstood. Another way of saying this is that aspiration is all right, but craving is not. Similarly, in Buddhism attachment is not the same thing as relationship. We can cling to other things besides relationships.

The case for behavioral strategy - McKinsey Quarterly - Strategy Once heretical, behavioral economics is now mainstream. Money managers employ its insights about the limits of rationality in understanding investor behavior and exploiting stock-pricing anomalies. Policy makers use behavioral principles to boost participation in retirement-savings plans. Marketers now understand why some promotions entice consumers and others don’t. Yet very few corporate strategists making important decisions consciously take into account the cognitive biases—systematic tendencies to deviate from rational calculations—revealed by behavioral economics. It’s easy to see why: unlike in fields such as finance and marketing, where executives can use psychology to make the most of the biases residing in others, in strategic decision making leaders need to recognize their own biases. This is not to say that executives think their strategic decisions are perfect. The value of good decision processes Exhibit 1 The research analyzed a variety of decisions. Enlarge Exhibit 2 Pop out

What motivates us at work? 7 fascinating studies that give insights “When we think about how people work, the naïve intuition we have is that people are like rats in a maze,” says behavioral economist Dan Ariely in today’s talk, given at TEDxRiodelaPlata. “We really have this incredibly simplistic view of why people work and what the labor market looks like.” Dan Ariely: What makes us feel good about our work? During the Industrial Revolution, Ariely points out, Adam Smith’s efficiency-oriented, assembly-line approach made sense. “When we think about labor, we usually think about motivation and payment as the same thing, but the reality is that we should probably add all kinds of things to it: meaning, creation, challenges, ownership, identity, pride, etc.,” Ariely explains. To hear more on Ariely’s thoughts about what makes people more productive – and happier – at work, watch this fascinating talk. What have you noticed makes you work harder – and better?

How Obama Is Using the Science of Change Correction Appended: April 2, 2009 Two weeks before Election Day, Barack Obama's campaign was mobilizing millions of supporters; it was a bit late to start rewriting get-out-the-vote (GOTV) scripts. "BUT, BUT, BUT," deputy field director Mike Moffo wrote to Obama's GOTV operatives nationwide, "What if I told you a world-famous team of genius scientists, psychologists and economists wrote down the best techniques for GOTV scripting?!?! Moffo then passed along guidelines and a sample script from the Consortium of Behavioral Scientists, a secret advisory group of 29 of the... Subscribe Now Get TIME the way you want it One Week Digital Pass — $4.99 Monthly Pay-As-You-Go DIGITAL ACCESS — $2.99 One Year ALL ACCESS — Just $30!

Do Something Meaningful: Neil deGrasse Tyson and Ann Druyan on Carl Sagan by Maria Popova “Who are we, if not measured by our impact on others?” As a boundless admirer of the late and great Carl Sagan, I was thrilled to attend a special event at the Library of Congress celebrating their historic acquisition of his personal papers — 1,705 archival boxes of materials, to be precise — thanks to support from Family Guy creator Seth MacFarlane’s charitable foundation. Sagan was our civilization’s greatest yenta to the marriage of skepticism and wonder. As Bill “Science Guy” Nye so eloquently put it at the event, “Carl Sagan emboldened us to know our place among the stars, our place in space.” Drawing by young Carl Sagan, 1942 (Library of Congress) Druyan adds to Sagan’s own meditation on the meaning of life with an anecdote that captures the essence of his ethos, and his greatest gift to us: Who are we, if not measured by our impact on others? Thank you for everything, Carl. Donating = Loving Bringing you (ad-free) Brain Pickings takes hundreds of hours each month.

Tipping Desire Into Action | Patterns from IDEO My donations are bigger than yours Donating money to good causes seems like a universally desirable activity. Although many agree, few carry through on their intentions. They forget, other things come up, or they just never get around to it. Imagine companies who naturally compete for market share and profit also competing for maximum donations. Hesitant to walk the walk Jonathan is very involved in the HIV/AIDS community, volunteering his time to events, being a support to friends during testing, diagnosis and living with the condition. Football saves a friendship When Bobby’s childhood friend got married, he knew that it would be a struggle for them to see each other as often. Aside from the fact that they have always followed the Bucks, both friends admit that they buy the season tickets mostly to stay connected with one another. Recycling It’s not that people don’t want to recycle, but sometimes they just don’t remember. Bank of America Weight Watchers