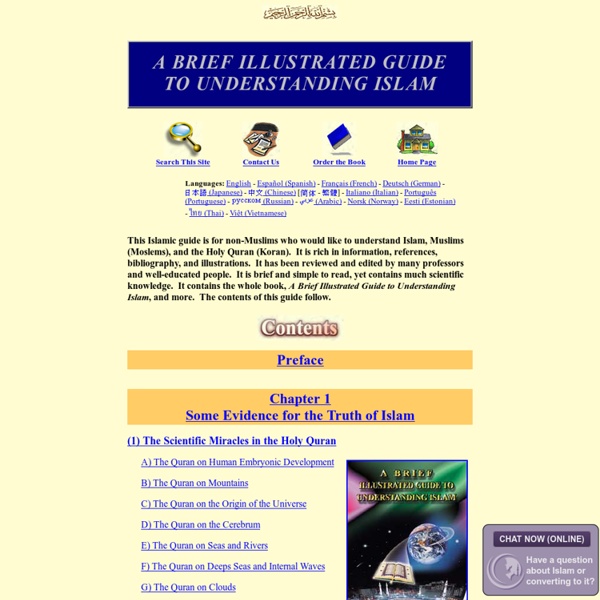 What Is a Worldview? by James Sire [Editor's Note: The following is adapted from the introduction of James Sire's book The Universe Next Door, Fifth Edition. Used by permission of InterVarsity Press PO Box 1400 Downers Grove, IL 60515. Few people have anything approaching an articulate philosophy—at least as epitomized by the great philosophers. Even fewer, I suspect, have a carefully constructed theology. But everyone has a worldview. Whenever any of us thinks about anything—from a casual thought (Where did I leave my watch?) Human Nature and the Purpose of Existence Written by: Nancy Khalek One of the most salient features of Sunni Islam is its emphasis on following and adhering to the custom and traditions of the Prophet (the Sunna). An essential aspect of this adherence is the emulation of Muhammad in everyday life. This, in part, is based on the general Islamic view that Muhammad represented the epitome of good character, that he was, in fact, sent as a prophet in order to teach people how to perfect their character. The idea of the Prophet as a model for behavior, ritual and otherwise, is an important part of Sunni devotion. Aside from the basic tenets to which all Muslim denominations subscribe, Sunnis prioritize cultivating a relationship with Muhammad as a guide for certain aspects of behavior based on the Sunna.

What is 'New Age' Religion, and Why Can't Christians Get on Board? -Spiritual Living, Christian Faith If you haven't run into it before, it would be hard to avoid it now. Oprah's rolling out the red carpet for the New Age: a weekly online class with New York Times bestselling guru Eckhart Tolle and a daily broadcast with Marianne Williamson, whose Course in Miracles was beckoning seekers thirty years ago when I was tripping through the wonderland of discovering my own divinity and wielding the powers of the universe to create my own reality. Ah, but I didn’t know Jesus back then – that is, I didn't know him as the Son of God. I knew him only through my guru, who taught that Jesus was a great spiritual master and who blended quotes from the New Testament with quotes from the Bhagavad-Gita to produce a spiritual foundation for people like me – too hip, too cool, too sophisticated to tie themselves to the narrow-minded thinking of Christianity. Why can't we all just get along?

Judaism 101 Judaism 101 is an online encyclopedia of Judaism, covering Jewish beliefs, people, places, things, language, scripture, holidays, practices and customs. My goal is to make freely available a wide variety of basic, general information about Judaism, written from a traditional perspective in plain English. This web site has grown continually for more than 10 years and continues to be updated periodically.

The New Age Movement- What Is It? This article first appeared in the Summer 1985 issue of Forward, currently the Christian Research Journal. The full PDF can be viewed by clicking here. For further information or to subscribe to the Christian Research Journal go to: Internet History Sourcebooks Project The History of the Sephardic Communities The New World Diaspora General 19th Century WEB Walnut Street 19th Century Jewish-American history, poetry and fiction, polemics and philosophy. Has an online library of 19th century Jewish books. WEB Jews in the Civil War Contains an impressive collection of original texts from both Union and Confederate sides. Our Beliefs » salvos.org.au/ Our Beliefs The Salvation Army has 11 faith-based statements called doctrines that summarise its religious beliefs. The Salvation Army’s statements place it in harmony with other mainstream denominations of Protestant Christianity.

Major religious groups The world's principal religions and spiritual traditions may be classified into a small number of major groups, although this is by no means a uniform practice. This theory began in the 18th century with the goal of recognizing the relative levels of civility in societies.[1] World map color-coded to denote major religion affiliations (as of 2011[update]) History of religious categories

What Do Quakers Believe? What Are Their Beliefs on Jesus? Thank you for your interest in Patheos newsletters! Please enter your email address below and click the "Subscribe" button. Thank you for your subscription. 5 Major World Religions - See What These Different Religions Believe about God By Marilyn Adamson We all want to make it through life with success, some sense that we did it right. So what about the major world religions?

Amish The Amish are members of an Anabaptist Christian denomination who are especially known for their separation from society, for living in isolated Amish communities, for the rejection of most modern technology, and for their distinctly conservative dress. Their way of life differentiates them from other Christian denominations. In the United States, Amish communities are mostly found in Pennsylvania and the Midwest, namely Ohio and Indiana. It is common for members of this denomination to live rurally where there is land to farm. It is also common for Amish to live near other Amish, which enables them to support each other's lifestyle as well as establish a local congregation of people with similar beliefs and convictions.

Religious pluralism Religious pluralism is an attitude or policy regarding the diversity of religious belief systems co-existing in society. It can indicate one or more of the following: As the name of the worldview according to which one's religion is not the sole and exclusive source of truth, and thus the acknowledgement that at least some truths and true values exist in other religions.As acceptance of the concept that two or more religions with mutually exclusive truth claims are equally valid. This may be considered a form of either toleration (a concept that arose as a result of the European wars of religion) or moral relativism.The understanding that the exclusive claims of different religions turn out, upon closer examination, to be variations of universal truths that have been taught since time immemorial. Definition and scope[edit]

Amish Beliefs, Practices, and Customs By Jack Zavada Updated December 10, 2014. Amish beliefs hold much in common with the Mennonites, from whom they originated. Many Amish beliefs and customs come from the Ordnung, a set of oral rules for living handed down from generation to generation. Amish Beliefs Baptism - As Anabaptists, the Amish practice adult baptism, or what they call "believer's baptism," because the person is old enough to choose what they believe in.