Stop Making Plans: How Goal-Setting Limits Rather Than Begets Our Happiness and Success 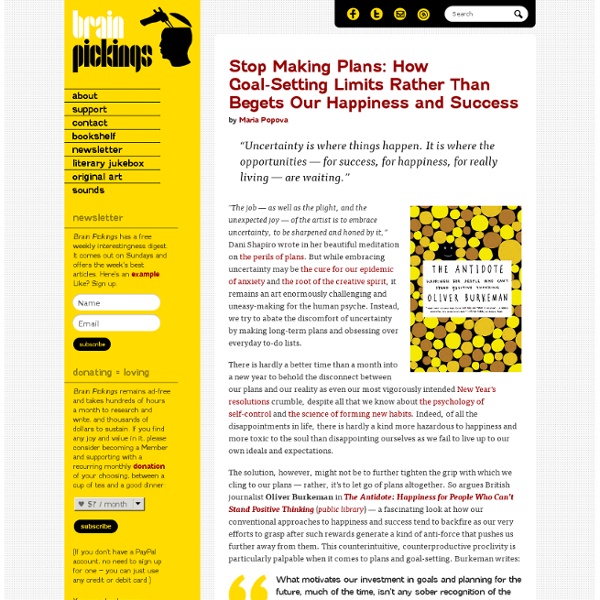 by Maria Popova “Uncertainty is where things happen. It is where the opportunities — for success, for happiness, for really living — are waiting.” “The job — as well as the plight, and the unexpected joy — of the artist is to embrace uncertainty, to be sharpened and honed by it,” Dani Shapiro wrote in her beautiful meditation on the perils of plans. But while embracing uncertainty may be the cure for our epidemic of anxiety and the root of the creative spirit, it remains an art enormously challenging and uneasy-making for the human psyche. Instead, we try to abate the discomfort of uncertainty by making long-term plans and obsessing over everyday to-do lists. There is hardly a better time than a month into a new year to behold the disconnect between our plans and our reality as even our most vigorously intended New Year’s resolutions crumble, despite all that we know about the psychology of self-control and the science of forming new habits. Uncertainty is where things happen.

A Moment in Eternity: Adolfo Bioy Casares’ The Invention of Morel Octavio Paz says calls The Invention of Morel, “without exaggeration… a perfect novel.” According to Borges, “to classify [it] as perfect is neither an imprecision nor a hyperbole.” It has influenced creations as diverse as the works of Gabriel Garcia Marquez, the influential French film Last Year at Marienbad, and the television series Lost. Wikipedia says (albeit, without citation) that “many consider it… to be one of the best pieces of fantastic fiction.” And if that isn’t enough to pique one’s interest, the principal character, Morel, is named after H.G.

Adaptive Strategy Is a Cop-Out - Roger Martin by Roger Martin | 11:00 AM May 23, 2014 Managers today are all obsessed with VUCA, an ugly acronym encapsulating the notion that business faces more volatility, uncertainty, complexity, and ambiguity than ever before, requiring an entirely new kind of approach to strategy. That new way comes under many terms: discovery-driven strategy, emergent strategy, lean strategy, agile strategy, to name just the best known. They all hold, more or less, that in this VUCA world, you just have to try stuff, see how it works, and adjust. Thinking about strategy before doing something is so retrograde, so pre-VUCA. I just don’t buy it.

How to Cope with Uncomfortable Uncertainty Joy is not the only experience that people try to avoid, to their detriment. Many people cannot tolerate the feeling of uncertainty, and according to mounting evidence, this fear affects mood and health. Intolerance of uncertainty is linked with mental disorders such as anxiety and depression, researchers confirmed in a paper in the June 2013 issue of the Journal of Clinical Psychology; their results also revealed a strong link to panic disorder. Philosopher Martha Nussbaum on How to Live with Our Human Fragility by Maria Popova “To be a good human being is to have a kind of openness to the world, an ability to trust uncertain things beyond your own control.” In 1988, Bill Moyers produced a series of intelligent, inspiring, provocative conversations with a diverse set of cultural icons, ranging from Isaac Asimov to Noam Chomsky to Chinua Achebe. It was unlike any public discourse to have ever graced the national television airwaves before. The following year, the interviews were transcribed and collected in the magnificent tome Bill Moyers: A World of Ideas (public library). But for all its evenness of brilliance, one conversation in the series stands out for its depth, dimension, intensity, and timelessness — that with philosopher Martha Nussbaum, one of the most remarkable and luminous minds of our time, who sat down to talk with Moyers shortly after the publication of her enormously stimulating book The Fragility of Goodness: Luck and Ethics in Greek Tragedy and Philosophy.

Business leaders need systemic thinking for sustainability Business leaders must see that they sit within a complex web of interdependent ecological and social systems. Photograph: Unknown/ Royalty-Free/CORBIS The economy is in the tank and thousands of people are out of work.

Situations Matter: How Context Shapes Our Lives by Maria Popova Debunking the myth of character, or what sitcoms have to do with the mysteries of personality. “What matters most is how well you walk through the fire,” Charles Bukowski famously wrote. We walk through life and its fires along narrative paths that define who we are and what our personalities are like. 12 Lifestyle Factors That Make You Feel Depressed Many clients come to me believing there is “something wrong” with them. They believe they’re fundamentally flawed, or they're making a last-ditch attempt at life, often with plans to end theirs if things don’t improve. However, more often than not, the root of their depression is not a biochemical imbalance or a life-sentence. Rather, it’s a result of one or more of the following:

Systems Thinking by HainesCentre.com Approaching Business with Systems Thinking Businesses promote and sell products and services, which includes solutions to a problem or benefit of a product. In a lot of businesses, expertise is an key capability that leads to the ability to provide optimum service. Anaïs Nin on Embracing the Unfamiliar by Maria Popova “It is a sign of great inner insecurity to be hostile to the unfamiliar.” We’ve already seen that life is about living the questions, that the unknown is what drives science, and that the most beautiful experience we can have is the mysterious.

A Natural History of Love by Maria Popova “A one-syllable word heavy as a heartbeat … a sort of traffic accident of the heart.” “You can never know anyone as completely as you want. But that’s okay, love is better,” a wise woman wrote . But what, exactly, is love?