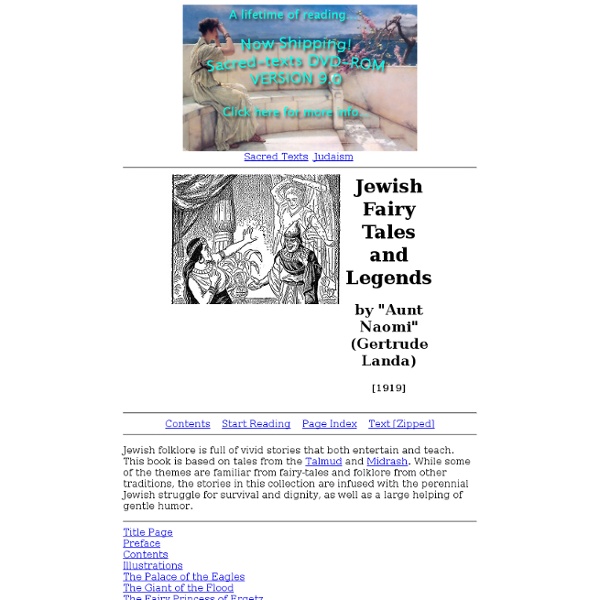 The Standard Prayer Book Contents Start Reading Page Index Text [Zipped] This is a Jewish prayer book, or Siddur, containing prayers, meditations, and texts used during life passage ceremonies including circumcision, marriage and funerals, with variants for Jewish holy days. It includes texts such as the Ten Commandments, the Maimonidean 13 Principles of Faith, and the Pirqe Aboth (Ethics of the Fathers). This Siddur, The Standard Prayer Book, appears to have been widely used in the early 20th century.

The 24 Books of the Hebrew Bible In their simplest form, the twenty-four books of the Jewish Bible - the Tanach - present a history of the first 3500 years from creation until the building of the second Temple in Jerusalem. The books also relate the history of the Jewish nation from its earliest stage, through the giving of the Law at Mount Sinai, and until the end of the first commonwealth. But the Tanach is much more than just history. In it one can learn about G-d's plan for the world and of His relationship with mankind, specifically, His chosen nation - the Jews. Here is where G-d tells us what He wants us to do! "And now, Israel, what does the Lord your G-d want of you? Presented here is a very short overview of each of the books of Tanach, divided into three main categories: the Chumash, the Prophets and the Writings. The Five Books of Moses (Chumash)

An Introduction to Judaism: History, Religion, Jews, Israel and Scriptures Judaism is the religion commonly linked to Jewish people. It is based on the principles contained in the Hebrew Bible, the Tanakh, which are expanded and explained in the Talmud. In 2007, the world Jewish population was of 13.2 million, 41 percent of which reside in Israel, whilst the remaining is spread around the world (the diaspora). Jewish history begins with the covenant established between God and Abraham around 1812 BC, during the Bronze Age, in the Middle East. Throughout their history, Jewish people experienced times of great expansion and advance in knowledge (both theological and scientific) which were interspersed by periods of persecution and massacres. In 1947 the United Nations agreed to create the State of Israel in what was then Palestine. Beliefs and principles The Jewish religion is based on the principle that there is only one indivisible all-powerful, all-knowing and all-present God, who is fair and just and the creator of the universe and mankind. Interesting facts

The Wisdom of Israel Sacred Texts Judaism Wisdom of the East Contents Start Reading Page Index Text [Zipped] This is a short anthology of passages from the Jewish wisdom literature of the Talmud and Midrash, part of the Wisdom of the East series. Unlike some similar compilations, Collins documents where possible the source of his quotations. He also apparently translated from the originals rather than reusing existing English renderings. Title PageContentsEditorial NoteIntroductionWhy God Permits IdolatryThe Lamp that Goes Out when its Light is Done, and the Figs that are Gathered in their Due SeasonThe Labourers in the VineyardThe Likeness of a Palm-TreeThe Tutor and the Naughty PrincelingThose NearestThe Heritage of the Unborn PrinceThe Traveller and the Tree in the DesertBetter Feed the Poor than Entertain the AngelsThe Sand, and the Furnace that PurifiesThe Stars are not envious!

History of Judaism 92KGoogle + What is the History of Judaism? History is of the utmost importance in Judaism. This article provides an overview of Jewish history from the biblical era to the modern day. Historical and Religious Context Judaism traces its history back to the creation of mankind, but the explicitly Jewish historical origins begin with Abraham and the Hebrews. Under God's command, Abraham migrated to the region of Canaan, which is roughly equivalent to modern Israel and Lebanon. The ancient Hebrew people were seminomadic herdsman and farmers, organized into tribes and living in Mesopotamia. All of these cultures featured belief in creator and preserver gods, a system of ethics, and developed religious rituals. Biblical Jewish History The period of Jewish history designated by some historians as "Biblical Judaism" is the centuries covered by the narratives of the Tanakh, from the creation and primitive history of mankind to the last of the prophets in the 4th century BCE. Rabbinical Judaism

Tanach (JPS) The Jewish Publication Society translation This is the Jewish Publication Society translation of the Tanach, the Hebrew Bible. This etext is a completely new transcription, based on a first edition of the 1917 text, which is under preparation at the Internet Sacred Text Archive and by volunteers. We welcome any reports of typographical errors in this electronic text. Title PagePrefaceThe Law Genesis Exodus Leviticus Numbers Deuteronomy Joshua Judges I Samuel II Samuel I Kings II Kings The Biblical Hebrews in conflict with their Neighbors The word Hebrew has been associated with the word Hiberu and Apiru, described in Wikipedia as " the name given by various Sumerian, Egyptian, Akkadian, Hittite, Mitanni, and Ugaritic sources (dated, roughly, from before 2000 BC to around 1200 BC) to a group of people living as nomadic invaders in areas of the Fertile Crescent from Northeastern Mesopotamia and Iran to the borders of Egypt in Canaan." They are "variously described as nomadic or semi-nomadic, rebels, outlaws, raiders, mercenaries, and bowmen, servants, slaves, migrant laborers, etc." The Hebrews described in the Old Testament appear to have been semi-nomadic herders of sheep and goats and occasional farmers, without knowledge of metal working, sophisticated craftsmanship or a written language. Like other nomadic herders, they were tent dwellers – as Abraham is described in Genesis 13:3. The Land of Canaan Among the critics is Michael Coogan, editor of The New Oxford Annotated Bible. Mark S. The Philistines and Samson Sources

The Golem: Jewish Mythology or Kabbalistic Robot? On Sunday night “The Amazing Race” whittled down from 4 teams to the final 3 in a race around the world. This leg of the race took place entirely in Prague, Czech Republic. As is customary on The Amazing Race, the roadblocks and detours along the way were part of the local culture. One cannot speak of Prague without mentioning the great Maharal, Rabbi Judah Loew. The racers were to cover a straw and wood golem with clay and bring the golem to the Old New Synagogue in Prague to receive their next clue. Did you notice the way they describe a golem? “Teams will delve into Prague lore and Jewish Mythology by building a golem, a figure made of straw and clay that was constructed to protect the Jewish Quarter in the 15th Century.” I would probably take offense to a miraculous biblical narrative being called mythology. But when the golem was branded mythology I did not even flinch. Why? Because of an article that was brought to my attention by Rabbi Adlerstein. The article is here.