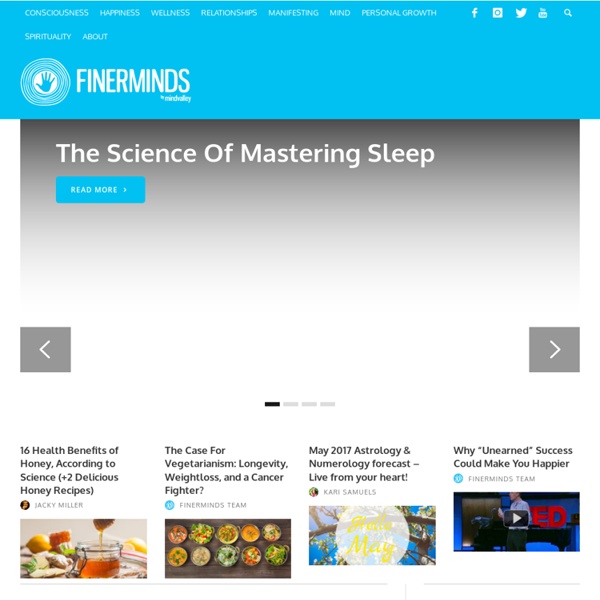 documentary A documentary about the root causes of the systemic value disorders and detrimental symptoms caused by our current established system. The film details the need to outgrow the dated and inefficient methods of politics, law, business, or any other "establishment" notions of human affairs, and use the methods of science, combined with high technology, to provide for the needs of all the world's people. “If we are genuinely concerned about the environment and the fellow human beings, and want to end territorial disputes, war, crime, poverty, hunger, and the other problems that confront us today, the intelligent use of science and technology are the tools with which to achieve a new direction; one that will serve all people, and not just a select few.” — Jacque Fresco Paradise or Oblivion, by...

How to Make Your Own Beauty Products from Scratch - Health - GOOD Let's keep things simple this week. When it comes to personal-care products, we are big believers in streamlining what you use—see "Eight Products You Think You Need But Don't" for a refresher—buying less in general, and getting creative. We have both always loved experimenting in our kitchens and our bathrooms, checking ingredients in products we love, isolating the main ones, and then trying them on their own. Sometimes it works: A favorite hair leave-in contained aloe, for example, so one day we tried aloe alone and found that, lo and behold, it worked just fine on its own. And sometimes it didn't.

How To Find Inner Peace Within Yourself “The life of inner peace, being harmonious and without stress, is the easiest type of existence.” – Norman Vincent Peale Finding Inner Peace and Happiness Silence is truly a beautiful phenomenon with the power to transform you; it touches you to the very core of your being. This is the part of you that is connected to reality, existence itself. Silence is rejuvenation; it allows you to be yourself, to relax into yourself, and find inner peace. The reality for most of us, though, is that we never truly experience utter silence.

Social Consciousness: Health Tips to Decalcify Your Pineal Gland The pineal gland (also called the pineal body, epiphysis cerebri, epiphysis, conarium or the "third eye") is a small endocrine gland in the vertebrate brain. These are just a few things you can do to decalcify and nourish your pineal gland. I recommend you make your own notes, research and come to your own consensus. “Fortunately, some are born with spiritual immune systems that sooner or later give rejection to the illusory worldview grafted upon them from birth through social conditioning. They begin sensing that something is amiss, and start looking for answers. Inner knowledge and anomalous outer experiences show them a side of reality others are oblivious to, and so begins their journey of awakening.

Color Oracle 1. Look at the 25 colors and select the one you find most pleasing right now. Pull this color into the first empty field at the left of the top row. 2.Now select the color that you find most unpleasing right now. Pull this color into the first field at the left end of the bottom empty row. The Hustler's MBA I've been saying that college is obsolete for a very long time. I dropped out in 2000, because even back then I could see that it was a really poor value proposition. I didn't predict this because I'm some crazy genius, but because I'm willing to discard emotional attachment and stare plainly at the facts. School is outrageously expensive, leaving graduates with a debt (or net expenditure) of tens of thousands of dollars-- sometimes even one or two hundred thousand. There are some things that are worth that amount of money, but for many people school isn't one of them.

The Hidden History of The Human Race - Klaus Dona - Spiritual Archeologist I first met Klaus Dona, an Austrian artifacts researcher, in July 2009. His Project Camelot interview (above) was extremely well received, and many people wrote asking for a follow-up. So I'm delighted to bring you more. This video is a 45 minute slideshow, with a personal commentary from Klaus. It's data-rich, detailed, intensive, absorbing, and may contain more startling information about the history of the human race in one place than any other video you've ever seen. The journey we embark on covers Atlantis, reptilian humanoids, the Anunnaki, ancient symbolism, ancient science, an ancient global language, and much more.

The Occult Rocket Scientist Who Conjured Spirits with L. Ron Hubbard What if the lab was less interested in exploring outer space than the depths of the void? What if its researchers huddled around their computer screens in search of paranormal entities or dark gods crawling clear of the event horizons of nearby black holes? Of course, that’s not the case. JPL is not part of some Joss Whedon-esque occult-industrial complex. It does not mingle science with the supernatural. Yet one of its founders did.

Kerouac's Breakthrough The following is excerpted from The Voice Is All: The Lonely Victory of Jack Kerouac, published by Viking, 2012. On October 7, 1951, after a gloomy Sunday when he seemed to be making no progress on the chapters about Neal Cassady he was adding to On the Road, Jack went to Birdland to hear the alto saxophonist Lee Konitz, who recently had come into his own as a leading innovator of cool jazz. During Konitz's solo in "I Remember April," which he played as if it were "the room he lived in," his music sounded "so profoundly interior" to Jack that he was sure very few people would understand it. In fact, he compared Konitz's extended phrases to the sentences he was writing lately, sentences whose direction seemed mysterious until the "solution" was suddenly unveiled in a way that shed light backward on everything that had preceded it. On October 15, Jack was still in a state of panic when he met Ed White in a Chinese restaurant near Columbia.