Alice in Quantumland: A Charming Illustrated Allegory of Quantum Mechanics by a CERN Physicist 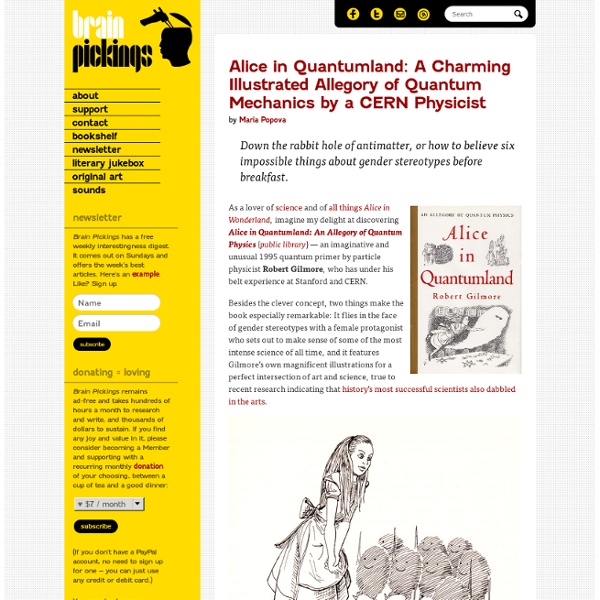 by Maria Popova Down the rabbit hole of antimatter, or how to believe six impossible things about gender stereotypes before breakfast. As a lover of science and of all things Alice in Wonderland, imagine my delight at discovering Alice in Quantumland: An Allegory of Quantum Physics (public library) — an imaginative and unusual 1995 quantum primer by particle physicist Robert Gilmore, who has under his belt experience at Stanford and CERN. Besides the clever concept, two things make the book especially remarkable: It flies in the face of gender stereotypes with a female protagonist who sets out to make sense of some of the most intense science of all time, and it features Gilmore’s own magnificent illustrations for a perfect intersection of art and science, true to recent research indicating that history’s most successful scientists also dabbled in the arts. Gilmore writes in the preface: In the first half of the twentieth century, our understanding in the Universe was turned upside down.

Wild Ones: What an Obscure Endangered Butterfly Teaches Us About Parenthood, Legacy, and Being Human by Maria Popova “Maybe you have to believe in the value of everything to believe in the value of anything.” Wild Ones: A Sometimes Dismaying, Weirdly Reassuring Story About Looking at People Looking at Animals in America ( public library ) by journalist Jon Mooallem isn’t the typical story designed to make us better by making us feel bad, to scare us into behaving, into environmental empathy; Mooallem’s is not the self-righteous tone of capital-K knowing typical of many environmental activists but the scientist’s disposition of not-knowing , the poet’s penchant for “negative capability.” In the introduction, Mooallem recalls looking at his four-year-daughter Isla’s menagerie of stuffed animals and the odd cultural disconnect they mime: [T]hey were foraging on the pages of every bedtime story, and my daughter was sleeping in polar bear pajamas under a butterfly mobile with a downy snow owl clutched to her chin. It was a monstrously eventful and confusing ten seconds. Donating = Loving

Opportunistic Quantum Leaps in Human Evolution | Hardshell Labs™ “What is here is elsewhere. What is not here is nowhere.” – a Hindu proverb DIY quantum applications. Figure 1: Anti-gravity Engine. 2: an Infinite Force Engine. 3: Wormhole. All three easily engineered at home with your cat and buttered toast. Where do really new and productive ideas come from? Although this is clearly a time of great upheaval in Earth’s history, in many senses we’re reorganizing civilization to include new sets of important values in human consciousness. This wasn’t the first time someone noticed this. One of the next important human perspectives on the planet, monotheism, held that spirit didn’t even exist on the planet, and was only in the sky. Now, fast forward to scientific method and complex technologies. Then in the last 170 years the world and universe became infinitesimally smaller because of global travel, modern electronic communications and space travel. The unseen was in the air. Max Planck’s noble photo. What’s a ‘quantum leap’ anyway? So, take heart.

Learned Optimism: Martin Seligman on Happiness, Depression, and the Meaningful Life by Maria Popova What 25 years of research reveal about the cognitive skills of happiness and finding life’s greater purpose. “The illiterate of the 21st century,” Alvin Toffler famously said, “will not be those who cannot read and write, but those who cannot learn, unlearn, and relearn.” Last week, Oliver Burkeman’s provocatively titled new book, The Antidote: Happiness for People Who Can’t Stand Positive Thinking, prompted me to revisit an old favorite by Dr. Seligman begins by identifying the three types of happiness of which our favorite psychology grab-bag term is composed: ‘Happiness’ is a scientifically unwieldy notion, but there are three different forms of it if you can pursue. He then defines optimism and pessimism, pointing out the challenge to self-identify as either, and offers a heartening, heavily researched reassurance: The optimists and the pessimists: I have been studying them for the past twenty-five years. Optimism is invaluable for the meaningful life. Donating = Loving

Khan Academy Godliness in the Known and the Unknowable: Alan Lightman on Science and Spirituality by Maria Popova “Faith is the willingness to give ourselves over, at times, to things we do not fully understand… the full engagement with this strange and shimmering world.” “If we ever reach the point where we think we thoroughly understand who we are and where we came from,” Carl Sagan wrote in his timeless meditation on science and religion, “we will have failed.” That vital discomfort is precisely what physicist Alan Lightman — celebrated author of both nonfiction and novels, one of the finest science essayists writing today, the very first person to receive dual appointments in science and the humanities at MIT, an extraordinary storyteller, and one of my favorite minds — explores in one of the essays in his entrancing new anthology, The Accidental Universe: The World You Thought You Knew (public library | IndieBound). Alan Lightman (Photograph courtesy of MIT) Except for a God who sits down after the universe begins, all other Gods conflict with the assumptions of science.

Newton's Laws of Motion The motion of an aircraft through the air can be explained and described by physical principals discovered over 300 years ago by Sir Isaac Newton. Newton worked in many areas of mathematics and physics. He developed the theories of gravitation in 1666, when he was only 23 years old. Some twenty years later, in 1686, he presented his three laws of motion in the "Principia Mathematica Philosophiae Naturalis." Newton's first law states that every object will remain at rest or in uniform motion in a straight line unless compelled to change its state by the action of an external force. The second law explains how the velocity of an object changes when it is subjected to an external force. F = m * a For an external applied force, the change in velocity depends on the mass of the object. The third law states that for every action (force) in nature there is an equal and opposite reaction. Activities: Guided Tours Newton's Laws of Motion: Navigation .. Beginner's Guide Home Page

The 13 Best Science and Technology Books of 2013 by Maria Popova The wonders of the gut, why our brains are wired to be social, what poetry and math have in common, swarm intelligence vs. “God,” and more. On the heels of the year’s best reads in psychology and philosophy, art and design, history and biography, and children’s books, the season’s subjective selection of best-of reading lists continues with the finest science and technology books of 2013. Every year since 1998, intellectual impresario and Edge editor John Brockman has been posing a single grand question to some of our time’s greatest thinkers across a wide spectrum of disciplines, then collecting the answers in an annual anthology. In 2012, the question Brockman posed, proposed by none other than Steven Pinker, was “What is your favorite deep, elegant, or beautiful explanation?” In the introduction preceding the micro-essays, Brockman frames the question and its ultimate objective, adding to history’s most timeless definitions of science: Be still.

How To Discover The Message You're Meant To Share With The World You have a message. Yes, I'm talking to you. Maybe you know what your message is, or maybe you don't. Expressing your message doesn't have to be a big production. Deep down, we're all called to be of service. It's a beautiful thing to feel drawn to help other people. Luckily the answer isn't far away. Don't be fooled by the idea that you don't have anything to offer because you're still in midst of your struggles. You don't have to have all the answers to offer your message to the world. Yes, you can be right in the thick of it and still be of great service through your vulnerability, your humanity, your empathy, your humility, and your desire to connect with people who are going through a similar thing. I often joke with my clients by saying, "Do you think I became a love coach because relationships have been easy for me?" My struggles in relationships have been the catalysts for me to understand them. So what's your gift? What have you struggled through? How are you determined to change?