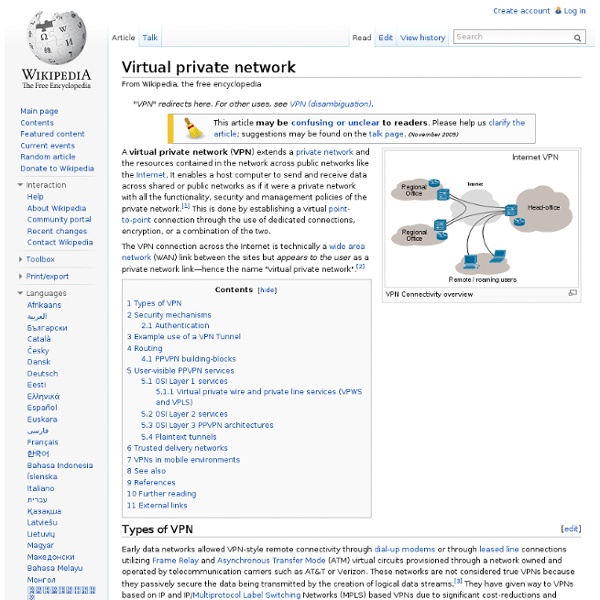 VPN connectivity overview A virtual private network connection across the Internet is similar to a wide area network (WAN) link between sites. From a user perspective, the extended network resources are accessed in the same way as resources available within the private network.[2] VPNs allow employees to securely access their company's intranet while traveling outside the office. Similarly, VPNs securely connect geographically disparate offices of an organization, creating one cohesive network. Types[edit] Early data networks allowed VPN-style remote connectivity through dial-up modems or through leased line connections utilizing Frame Relay and Asynchronous Transfer Mode (ATM) virtual circuits, provisioned through a network owned and operated by telecommunication carriers. VPNs can be either remote-access (connecting an individual computer to a network) or site-to-site (connecting two networks together). VPN systems may be classified by: Security mechanisms[edit] Authentication[edit]

Internet Protocol Suite The Internet protocol suite is the computer networking model and set of communications protocols used on the Internet and similar computer networks. It is commonly known as TCP/IP, because its most important protocols, the Transmission Control Protocol (TCP) and the Internet Protocol (IP), were the first networking protocols defined in this standard. Often also called the Internet model, it was originally also known as the DoD model, because the development of the networking model was funded by DARPA, an agency of the United States Department of Defense. TCP/IP provides end-to-end connectivity specifying how data should be packetized, addressed, transmitted, routed and received at the destination. The TCP/IP model and related protocol models are maintained by the Internet Engineering Task Force (IETF). History[edit] Early research[edit] Diagram of the first internetworked connection Specification[edit] Adoption[edit] Key architectural principles[edit] Abstraction layers[edit] Link layer[edit]

Researchers Discover Twitter-Controlled Bitcoin Bot F-Secure has discovered a bot that commands Twitter accounts to help in the generation of Bitcoins. Security firm F-Secure has discovered a bot that compromises Twitter accounts to help in the generation of Bitcoins. Bitcoin is a decentralized virtual currency that was formed by programmers in 2009, and is generated by programming computers to calculate highly complex math problems. The more computing power you have, the faster you can create Bitcoins; this is why Bitcoin rigs often look like massive sculptures of connected servers. According to an F-Secure blog post, the Twitter-based command below generates a bot that can control the Twitter user's computer and add it to a bitcoin mining rig. Last month Symantec blogged about the potential of creating botnets used to mine bitcoins, without the computer owner ever knowing. Bitcoin has found fans in libertarians, hackers of all shades, computer programmers, and more. For more, see "Which Bitcoin Exchange Can You Trust?"

Telemetry An expendable dropsonde used to capture weather data. The telemetry consists of sensors for pressure, temperature, and humidity and a wireless transmitter to return the captured data to an aircraft. Telemetry is the highly automated communications process by which measurements are made and other data collected at remote or inaccessible points and transmitted to receiving equipment for monitoring.[1] The word is derived from Greek roots: tele = remote, and metron = measure. Systems that need external instructions and data to operate require the counterpart of telemetry, telecommand.[2] Although the term commonly refers to wireless data transfer mechanisms (e.g., using radio, ultrasonic, or infrared systems), it also encompasses data transferred over other media such as a telephone or computer network, optical link or other wired communications like phase line carriers. A telemeter is a device used to remotely measure any quantity. History[edit] Applications[edit] Meteorology[edit]

Heroku | Cloud Application Platform IEC 61131-3 IEC 61131-3 is the third part (of 8) of the open international standard IEC 61131 for programmable logic controllers, and was first published in December 1993 by the IEC. The current (third) edition was published in February 2013. Part 3 of IEC 61131 deals with programming languages and defines two graphical and two textual PLC programming language standards: Data types[edit] (Considering byte size 8 bits) Variables[edit] Variable attributes: RETAIN, CONSTANT, AT GlobalDirect (local)I/O Mapping - Input, Output, I/OExternalTemporary Configuration[edit] Resource - Like a CPUTasks - Can be multiple per CPU.Programs - Can be executed once, on a timer, on an event. Program organization units[edit] Functions Standard: ADD, SQRT, SIN, COS, GT, MIN, MAX, AND, OR, etc.CustomFunction Blocks Standard:Custom - Libraries of functions can be supplied by a vendor or third party.Programs Configuration, resources, tasks[edit] Configuration - processing resources, memory for IO, execution rates, number of tasks.

Object-oriented programming Overview[edit] Rather than structure programs as code and data, an object-oriented system integrates the two using the concept of an "object". An object has state (data) and behavior (code). Objects correspond to things found in the real world. So for example, a graphics program will have objects such as circle, square, menu. The goals of object-oriented programming are: Increased understanding.Ease of maintenance.Ease of evolution. The overall understanding of the system is increased because the semantic gap—the distance between the language spoken by developers and that spoken by users—is lessened. Object-orientation takes this to the next step. In addition to providing ease of maintenance, encapsulation and information hiding provide ease of evolution as well. An object-oriented program usually contains different types of objects, each corresponding to a real-world object or concept such as a bank account, a hockey player, or a bulldozer. History[edit] A survey by Deborah J.

How Ethernet Works" Bridges can reduce congestion by allowing multiple conversations to occur on different segments simultaneously, but they have their limits in segmenting traffic as well. An important characteristic of bridges is that they forward Ethernet broadcasts to all connected segments. This behavior is necessary, as Ethernet broadcasts are destined for every node on the network, but it can pose problems for bridged networks that grow too large. When a large number of stations broadcast on a bridged network, congestion can be as bad as if all those devices were on a single segment. Routers are advanced networking components that can divide a single network into two logically separate networks. While Ethernet broadcasts cross bridges in their search to find every node on the network, they do not cross routers, because the router forms a logical boundary for the network. See How Routers Work for a detailed discussion of this technology.

HDfury.com How LAN Switches Work" If you have read other HowStuffWorks articles on networking or the Internet, then you know that a typical network consists of: nodes (computers)a connecting medium (wired or wireless)specialized network equipment like routers or hubs. In the case of the Internet, all of these pieces work together to allow your computer to send information to another computer that could be on the other side of the world! ­Switches are another fundamental part of many networks because they speed things up. ­There are many different types of switches and networks.