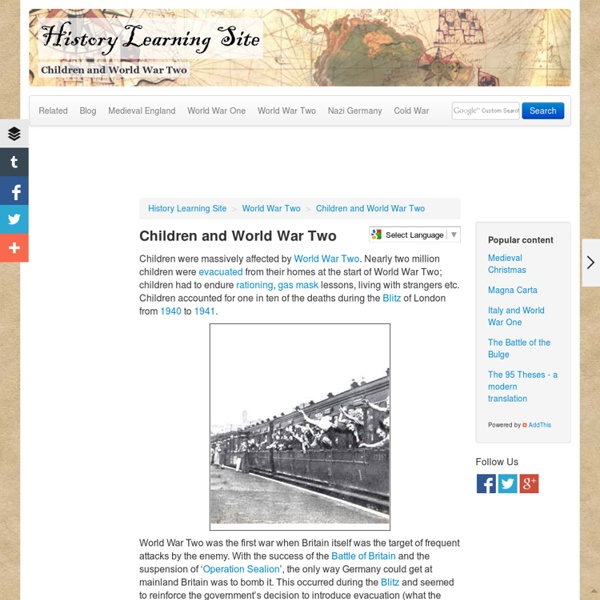 Children were massively affected by World War Two. Nearly two million children were evacuated from their homes at the start of World War Two; children had to endure rationing, gas mask lessons, living with strangers etc. Children accounted for one in ten of the deaths during the Blitz of London from 1940 to 1941. World War Two was the first war when Britain itself was the target of frequent attacks by the enemy. With the success of the Battle of Britain and the suspension of ‘Operation Sealion’, the only way Germany could get at mainland Britain was to bomb it. The impact of evacuation on children depended to an extent on which social strata you were in at the time. ‘Operation Pied Piper’ was a huge undertaking. ‘Operation Pied Piper’ planned to move 3.5 million children in three days. With such numbers involved, it was to be expected that some children would have a smooth passage to their reception area while some would not. MLA Citation/Reference "Children and World War Two".

World War Two (WW2) Homework for Kids For almost six years from 1939 to 1945 Britain fought the toughest war it had ever experienced. World War II was total war - every person, every business, every service was involved. Britain did not fight alone, the war also involved many countries. World War II involved 61 countries with 1.7 billion people, three quaters of the world's population. Fifty million people lost their lives and hundreds of millions people were injured. In 1918, Germany lost World War One. In 1933 the German people voted for a leader named Adolf Hitler, who led a political party in Germany called the National Socialists or Nazis. Shortly before 5am on Friday 1st September, 1939, German forces stormed the Polish frontier. World War Two in Europe began on 3rd September 1939, when the Prime Minister of Britain, Neville Chamberlain, declared war on Germany. Click to hear Chamberlain's speech The Second World War was started by Germany in an unprovoked attack on Poland. Countries What countries fought on which side?

Primary History - World War 2 - Children at war Children in World War 2 - WW2 Children & Evacuation Impact The effect of war on children, particularly young children cannot be measured but it would be hard to say anything other than the effect on their lives was monumental. The disruption of homes, the threat from aerial attacks and the loss of fathers to war had a huge effect on them emotionally. The death rate of children in London due to the Blitz was approximately 1 in 10 with children struggling to escape and lacking the physical strength of adults. World War 2 brought events to a child’s life which they shouldn’t have to live through. Most were separated from their families due to evacuations while others had to deal with death and loss of family. It was an emotional period and children had to grow up fast to cope with the surroundings. The British government in 1933 re-empted this threat to children and began the evacuation process when Hitler took power. Where you were evacuated dependant mostly on your social standing. The Application process: New Experiences for children:

World War Two (WW2) for Kids Remembrance Day For almost six years from 1939 to 1945 Britain fought the toughest war it had ever experienced. World War II was total war - every person, every business, every service was involved. Britain did not fight alone, the war also involved many countries. World War II involved 61 countries with 1.7 billion people (three quarters of the world's population). Fifty million people lost their lives and hundreds of millions people were injured. After World War One ended in 1918, Germany had to give up land and was banned from having armed forces. In 1933 the German people voted for a leader named Adolf Hitler, who led a political party in Germany called the National Socialists or Nazis. Shortly before 5am on Friday 1st September, 1939, German forces stormed the Polish frontier. World War Two in Europe began on 3rd September 1939, when the Prime Minister of Britain, Neville Chamberlain, declared war on Germany. Countries What countries fought on which side?

Children of the wartime evacuation In January 1941, Sheila Shear and her sister were evacuated from east London to the Chilterns and billeted with a bachelor called Harry Mayo. They came from very different backgrounds – the Shears were Jewish, he was Christian – but an affectionate bond developed between them. Weekly visits and holidays with Uncle Harry, as they came to know him, continued long after the war had ended. When Harry died, Sheila and her mother went to the funeral: "When we got to Chesham, we were treated like the closest members of his family. "We returned to London in the knowledge that we would never go back to Chesham again. Sheila is a past president of the League of Jewish Women and an energetic organiser at Nightingale House, a Jewish care home in London. It was codenamed Operation Pied Piper. What must it have been like to be sent away from home at five, 10 or even 14, as some of the older ones were, and then come home months, – or, more often, years – later and have to pick up where you left off?

Hitler Youth Movement The Hitler Youth was a logical extension of Hitler's belief that the future of Nazi Germany was its children. The Hitler Youth was seen as being as important to a child as school was. In the early years of the Nazi government, Hitler had made it clear as to what he expected German children to be like: Nazi education schemes part fitted in with this but Hitler wanted to occupy the minds of the young in Nazi Germany even more. Movements for youngsters were part of German culture and the Hitler Youth had been created in the 1920's. The Hitler Youth catered for 10 to 18 year olds. Boys at 10, joined the Deutsches Jungvolk (German Young People) until the age of 13 when they transferred to the Hitler Jugend (Hitler Youth) until the age of 18. Girls, at the age of 10, joined the Jungmadelbund (League of Young Girls) and at the age of 14 transferred to the Bund Deutscher Madel (League of German Girls). "Every girl belongs to us" League of German Maidens poster MLA Citation/Reference

World War 2 for Kids When did World War Two begin? World War Two in Europe began on 3rd September 1939, when the Prime Minister of Britain, Neville Chamberlain, declared war on Germany. It involved many of the world's countries. Why did the Second World War start? he Second World War was started by Germany in an unprovoked attack on Poland. When did World War Two end? The War ended in the Summer of 1945. How did people protect themselves during the war? Children and some women were evacuated from the big cities into the countryside. WW2 People's War - Life in Occupied France Britain's WW2 evacuee children to get their own memorial at last By Colin Fernandez for the Daily Mail and Will Nathan Updated: 08:02 GMT, 23 July 2009 They fled the bomb-torn towns and cities in their hordes to start new lives with strangers in the country for the duration of the Second World War. And now 70 years after the evacuation of 3.5million children, the first national memorial commemorating one of Britain's biggest ever social upheavals is planned for outside St Paul's Cathedral. The bronze artwork is to feature children holding hands with gas masks and luggage labels round their necks, but facing in different directions as they leave home to escape their Blitz-ravaged homes. Poignant: A detail of the proposed evacuees memorial that will stand outside St Paul's Cathedral The sculpture, by Dutch concentration camp survivor Maurice Blik, aims to 'symbolise the bewilderment, anxiety and uncertainty of children sent off to unknown and often unwelcoming destinations', Traumatic: Evacuee children board a train out of London in June 1940

Nazi Germany - Hitler Youth | HistoryOnTheNet In the early 1920s, the Nazi party had established a youth movement led by Kurt Gruber, with the aim of attracting young men who could be trained to become members of the SA (Stormtroopers). On 4th July 1926 the group was renamed the Hitler Youth, League of German Worker Youth and became attached to and run by the SA. The Hitler Youth (Hitler Jugend) wore uniforms and attended meetings and rallies where they were indoctrinated with Nazi views. Adolf Hitler believed that the support of the youth was vital to the future of the third Reich and aimed, through the Hitler Youth programme, to produce a generation of loyal supporters of Nazi views. Posters were used to attract more members and membership rose from 5,000 in 1925 to 25,000 in 1930. When the Nazis came to power in 1933 other youth groups were forcibly merged into the Hitler Youth and by the end of 1933 membership stood at just over 2 million. There were separate Hitler Youth groups for boys and girls: