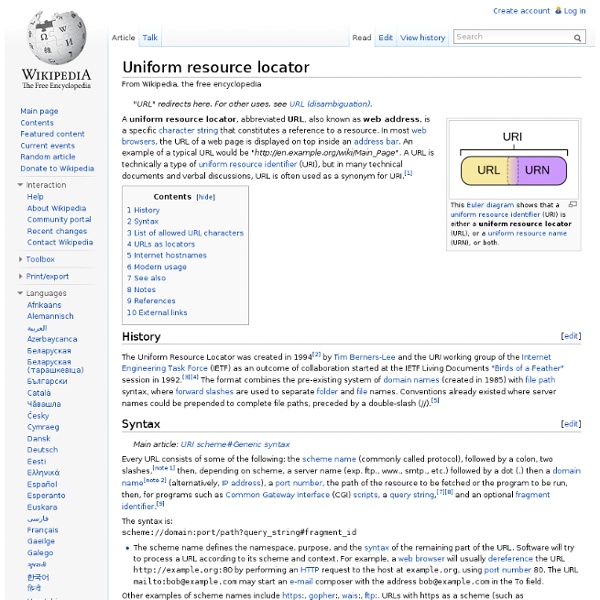 A uniform resource locator, abbreviated as URL (also known as web address, particularly when used with HTTP), is a specific character string that constitutes a reference to a resource. In most web browsers, the URL of a web page is displayed on top inside an address bar. An example of a typical URL would be " A URL is technically a type of uniform resource identifier (URI), but in many technical documents and verbal discussions, URL is often used as a synonym for URI, and this is not considered a problem.[1] URLs are commonly used for web pages (http), but can also be used for file transfer (ftp), email (mailto) and many other applications (see URI scheme for list). URLs are specified in RFC 3986 (2005), and in a WHATWG URL Living Standard.[2] History[edit] Syntax[edit] Every HTTP URL consists of the following, in the given order. The scheme says how to connect, the host specifies where to connect, and the remainder specifies what to ask for. Unreserved Related:  SemanticWeb

URI scheme URI schemes should be registered with IANA, although non-registered schemes are used in practice. RFC 4395 describes the procedures for registering new URI schemes. Generic syntax[edit] Internet standard STD 66 (also RFC 3986) defines the generic syntax to be used in all URI schemes. Every URI is defined as consisting of four parts, as follows: <scheme name> : <hierarchical part> [ ? The scheme name consists of a sequence of characters beginning with a letter and followed by any combination of letters, digits, plus ("+"), period ("."), or hyphen ("-"). The hierarchical part of the URI is intended to hold identification information hierarchical in nature. The query is an optional part, separated by a question mark ("?") Semicolon: key1=value1;key2=value2;key3=value3 Ampersand: key1=value1&key2=value2&key3=value3 The fragment is an optional part separated from the front parts by a hash ("#"). Examples[edit] Use In Browsers[edit]

Uniform resource identifier Relationship to URL and URN[edit] URIs can be classified as locators (URLs), as names (URNs), or as both. A uniform resource name (URN) functions like a person's name, while a uniform resource locator (URL) resembles that person's street address. URLs and URNs[edit] A URL is a URI that, in addition to identifying a web resource, specifies the means of acting upon or obtaining the representation: providing both the primary access mechanism, and the network "location". A URN is a URI that identifies a resource by name, in a particular namespace. Syntax[edit] Percent-encoding can add extra information to a URI. History[edit] Naming, addressing, and identifying resources[edit] URIs and URLs have a shared history. Over the next three and a half years, as the World Wide Web's core technologies of HTML (the HyperText Markup Language), HTTP, and web browsers developed, a need to distinguish a string that provided an address for a resource from a string that merely named a resource emerged.

Transport Layer Security Transport Layer Security (TLS) and its predecessor, Secure Sockets Layer (SSL), are cryptographic protocols designed to provide communications security over a computer network.[1] They use X.509 certificates and hence asymmetric cryptography to authenticate the counterparty with whom they are communicating,[2] and to exchange a symmetric key. This session key is then used to encrypt data flowing between the parties. This allows for data/message confidentiality, and message authentication codes for message integrity and as a by-product, message authentication.[clarification needed] Several versions of the protocols are in widespread use in applications such as web browsing, electronic mail, Internet faxing, instant messaging, and voice-over-IP (VoIP). An important property in this context is forward secrecy, so the short-term session key cannot be derived from the long-term asymmetric secret key.[3] Description[edit] History and development[edit] Secure Network Programming[edit] Dr. Notes

Turtle (syntax) Turtle (Terse RDF Triple Language) is a format for expressing data in the Resource Description Framework (RDF) data model with the syntax similar to SPARQL. RDF, in turn, represents information using "triples", each of which consists of a subject, a predicate, and an object. Each of those items is expressed as a Web URI. Turtle provides a way to group three URIs to make a triple, and provides ways to abbreviate such information, for example by factoring out common portions of URIs. < . SPARQL, the query language for RDF, uses a syntax similar to Turtle for expressing query patterns. In 2011, a working group of the World Wide Web Consortium (W3C) started working on an updated version of RDF, which is intended to be published along with a standardised version of Turtle. @prefix rdf: < . (Turtle examples are also valid Notation3).

OpenSSL History of the OpenSSL project[edit] The OpenSSL project was founded in 1998 to invent a free set of encryption tools for the code used on the Internet. As of 2014 two thirds of all webservers use it. The OpenSSL project management team consists of 4 Europeans. Major version releases[edit] Algorithms[edit] OpenSSL supports a number of different cryptographic algorithms: Ciphers Cryptographic hash functions Public-key cryptography (Perfect forward secrecy is supported using elliptic curve Diffie–Hellman since version 1.0.[7]) FIPS 140-2 compliance[edit] As of December 2012[update], OpenSSL is one of two open source programs to be involved with validation under the FIPS 140-2 computer security standard by the National Institute of Standards and Technology's (NIST) Cryptographic Module Validation Program (CMVP).[8] (OpenSSL itself is not validated, but a component called the OpenSSL FIPS Object Module, based on OpenSSL, was created to provide many of the same capabilities).[9] Licensing[edit]

Notation 3 Logic Up to Design Issues An RDF language for the Semantic Web This article gives an operational semantics for Notation3 (N3) and some RDF properties for expressing logic. These properties, together with N3's extensions of RDF to include variables and nested graphs, allow N3 to be used to express rules in a web environment. This is an informal semantics in that should be understandable by a human being but is not a machine readable formal semantics. This document is aimed at a logician wanting to a reference by which to compare N3 Logic with other languages, and at the engineer coding an implementation of N3 Logic and who wants to check the detailed semantics. These properties are not part of the N3 language, but are properties which allow N3 to be used to express rules, and rules which talk about the provenance of information, contents of documents on the web, and so on. The log: namespace has functions, which have built-in meaning for CWM and other software. See also: Motivation Formal syntax

PolarSSL The PolarSSL SSL library is a dual licensed (GPLv2 or proprietary) implementation of the SSL and TLS protocols and the respective cryptographic algorithms and support code required. Stated on the website is that PolarSSL aims to be "easy to understand, use, integrate and expand". History[edit] The PolarSSL SSL library is the official continuation fork of the XySSL SSL library. XySSL was created by the French "white hat hacker" Christophe Devine and was first released on November 1, 2006 under GPL and BSD licenses. In 2011 the Dutch government approved an integration between OpenVPN and PolarSSL, which is named OpenVPN-NL. Library[edit] Later versions of the SSL library (> PolarSSL 1.3.0) add abstraction layers for memory allocation and threading to the core "to support better integration with existing embedded operating systems".[4] Design priorities[edit] Development Documentation[edit] The following documentation is available for developers: Automated Testing[edit] Use[edit] Platforms[edit]

RDFa 1.1 Distiller and Parser Warning: This version implements RDFa 1.1 Core, including the handling of the Role Attribute. The distiller can also run in XHTML+RDFa 1.0 mode (if the incoming XHTML content uses the RDFa 1.0 DTD and/or sets the version attribute). The package available for download, although it may be slightly out of sync with the code running this service. If you intend to use this service regularly on large scale, consider downloading the package and use it locally. What is it? RDFa 1.1 is a specification for attributes to be used with XML languages or with HTML5 to express structured data. As installed, this service is a server-side implementation of RDFa. Distiller options Output format (option: format; values: turtle, xml, json, nt; default: turtle) The default output format is Turtle. Warnings for non RDFa 1.1 Lite usage (option: rdfa_lite; values: true, false; default: false) Host language (option: host_language; values: xhtml, html, svg, atom, xml; default: html) Determination of host language type

Resource Description Framework (RDF) Schema Specification 1.0 W3C Candidate Recommendation 27 March 2000 This Version: Latest Version: Previous Version: Editors: Dan Brickley, University of Bristol R.V. Acknowledgments Copyright ©1998,1999,2000 W3C® (MIT, INRIA, Keio), All Rights Reserved. Abstract This specification describes how to use RDF to describe RDF vocabularies. Status of this document This document is a Candidate Recommendation of the World Wide Web Consortium. This specification is a revision of the Proposed Recommendation of March 03 1999, incorporating editorial suggestions received in review comments. The Resource Description Framework is part of the W3C Metadata Activity. This section describes the status of this document at the time of its publication. It is inappropriate to use W3C Candidate Recommendations as reference material or to cite them as other than "work in progress". Table of Contents 1. 1.1. 1.1.1. 2.