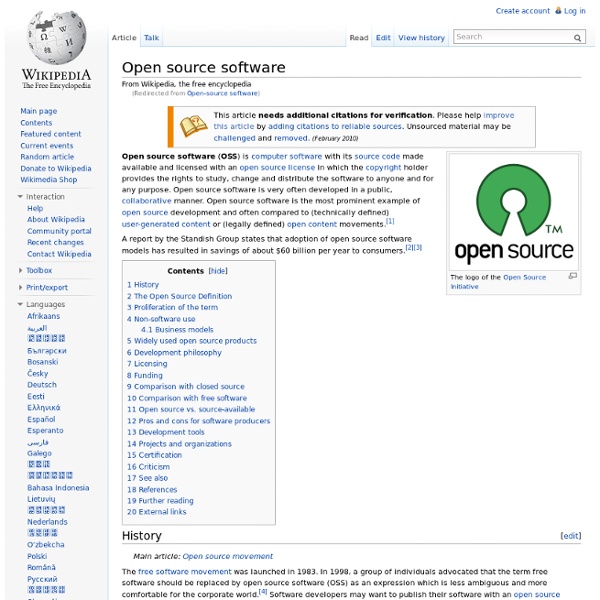 Open-source software (OSS) is computer software with its source code made available and licensed with a license in which the copyright holder provides the rights to study, change and distribute the software to anyone and for any purpose.[1] Open-source software is very often developed in a public, collaborative manner. Open-source software is the most prominent example of open-source development and often compared to (technically defined) user-generated content or (legally defined) open-content movements.[2] A report by the Standish Group (from 2008) states that adoption of open-source software models has resulted in savings of about $60 billion per year to consumers.[3][4] Definitions[edit] The Open Source Initiative's (OSI) definition is recognized[who?] as the standard or de facto definition. OSI uses The Open Source Definition to determine whether it considers a software license open source. Proliferation of the term[edit] Open software licensing[edit] Certifications[edit] Early releases

The GNU Operating System The Khronos Group Inc. What is Social Justice? » salvos.org.au/more/ What is Social Justice? In Australia, we have a pretty good understanding of what justice is. You know, justice is that thing that involves courts and lawyers, which makes sure that the bad guys get punished, the good guys get compensated, and that everyone gets a fair go... But what happens when society itself is the 'bad guy'? The answer? And social injustice won't end until someone stands up for those who don't have the ability to stand up for themselves. That's really what we're on about when we talk about social justice - it's the pursuit of justice purely for someone else's sake. Why The Salvation Army? Right around the world, The Salvation Army helps people who have nowhere else to turn. General William Booth, founder of The Salvation Army, believed in this approach. The Salvation Army's response to injustice can probably best be summed up in this quote from General William Booth: Learn more and get involved

Open Source Initiative non-profit organization promoting open-source software The Open Source Initiative (OSI) is a non-profit organization dedicated to promoting open-source software. The organization was founded in late February 1998 by Bruce Perens and Eric S. Raymond, part of a group inspired by the Netscape Communications Corporation publishing the source code for its flagship Netscape Communicator product. Later, in August 1998, the organization added a board of directors. History[edit] In 2009, the OSI was temporarily suspended from operation as a California corporation, apparently in response to a complaint concerning tax paperwork from earlier years.[14][clarification needed] Its current status is "Active".[15] On November 8, 2013, OSI appointed Patrick Masson as its General Manager.[19] Relationship with the free software movement[edit] Board members[edit] The current Open Source Initiative board of Directors is:[23] Past board members include: See also[edit] References[edit] External links[edit]

Free Open Source Software Permissions When a person logs into your app via Facebook Login you can access a subset of that person's data stored on Facebook. Permissions are how you ask someone if you can access that data. A person's privacy settings combined with what you ask for will determine what you can access. Permissions are strings that are passed along with a login request or an API call. email - Access to a person's primary email address.user_likes - Access to the list of things a person likes. For example, if you add the login button to a web app and ask for email and user_likes via the scope parameter, a person would be prompted with this dialog when logging in for the first time: Your app has requested a person's email address and the things they like but that request also automatically asks for access to a person's public profile. We provide similar mechanisms for iOS and Android. Your app can ask for additional permissions at any time, even after a person logs in for the first time.