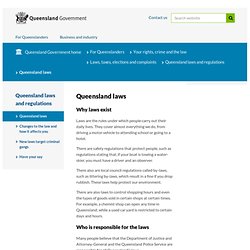 They cover almost everything we do, from driving a motor vehicle to attending school or going to a hotel. There are safety regulations that protect people, such as regulations stating that, if your boat is towing a water-skier, you must have a driver and an observer. Get started - Legal Research Guide - UQ Library Guides at University of Queensland Library. Queensland to introduce new laws against fatal punches in plan to stamp out drunken violence. PHOTO: The plan is aimed at stamping out nightlife violence across the state. 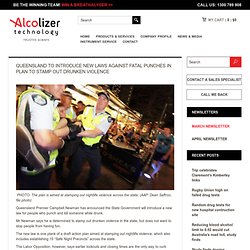 (AAP: Dean Saffron, file photo) Queensland Premier Campbell Newman has announced the State Government will introduce a new law for people who punch and kill someone while drunk. Mr Newman says he is determined to stamp out drunken violence in the state, but does not want to stop people from having fun. The new law is one plank of a draft action plan aimed at stamping out nightlife violence, which also includes establishing 15 “Safe Night Precincts” across the state. The Labor Opposition, however, says earlier lockouts and closing times are the only way to curb violence. Mr Newman says the law against “unlawful attack occasioning death” will be similar to a manslaughter charge and will have a maximum penalty of life imprisonment.

“It will particularly, for example, take away the excuse for accident,” he said. Mr Newman says the legislation will also allow courts to ban people from clubs and pubs. New laws deliver crushing blow to Far North Queensland hoons. COMPACT VEHICLE: Queensland Police in Cairns have crushed six seized vehicles under anti-hooning legislation. 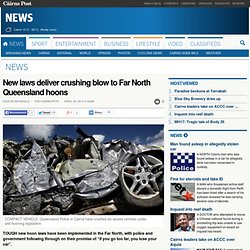 Source: News Limited TOUGH new hoon laws have been implemented in the Far North, with police and government following through on their promise of “if you go too far, you lose your car”. Six vehicles impounded for dangerous driving have now been crushed as a result of the Police Powers and Responsibilities Act, which was amended last November to reflect the government’s new hard line on hooning.

Acting Assistant Commissioner for the Northern region Paul Taylor said the crushing not only sent a strong message to hoons but would also result in safer roads for all residents. “Hooning is a great risk to members of the community like you and I and our families, when we have idiots thinking suburban streets are a private racetrack,” he said. New smoking laws welcomed - Cancer Council Queensland. 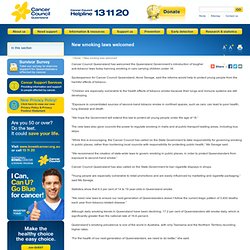 Spokesperson for Cancer Council Queensland, Anne Savage, said the reforms would help to protect young people from the harmful effects of tobacco. “Children are especially vulnerable to the health effects of tobacco smoke because their lungs and immune systems are still developing. “Exposure to concentrated sources of second-hand tobacco smoke in confined spaces, such as cars, can lead to poor health, lung disease and death. “We hope the Government will extend this law to protect all young people under the age of 18.” New Education Resource on QLD Bikie Laws - Rule of Law Institute.

Download the PDF The Rule of Law Institute of Australia (RoLIA) has produced a new education resource for secondary students in Queensland to help them understand the laws recently passed to deal with organised crime in Queensland. 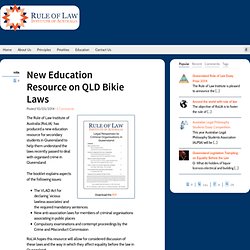 The booklet explains aspects of the following issues: The VLAD Act for declaring ‘vicious lawless associates’ and the required mandatory sentencesNew anti-association laws for members of criminal organisations associating in public placesCompulsory examinations and contempt proceedings by the Crime and Misconduct Commission RoLIA hopes this resource will allow for considered discussion of these laws and the way in which they affect equality before the law in Queensland. Queensland’s new cycling laws divide community, as 83-year-old man taken to Redcliffe Hospital after a crash with a car. 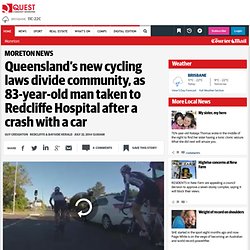 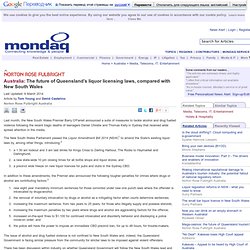 The New South Wales Parliament passed the Liquor Amendment Bill 2014 (NSW)1 to amend the State's existing liquor laws by, among other things, introducing:2 a 1.30 am lockout and 3 am last drinks for Kings Cross to Darling Harbour, The Rocks to Haymarket and Darlinghurst; a new state-wide 10 pm closing times for all bottle shops and liquor stores; and a precinct wide freeze on new liquor licences for pubs and clubs in the Sydney CBD. In addition to these amendments, the Premier also announced the following tougher penalties for crimes where drugs or alcohol are contributing factors:3.

Queensland Passing New Laws To Crack Down On 'Facebook Parties' Remember those laws Queensland was working on to combat so-called “Facebook parties”? 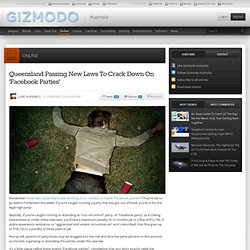 They’re set to go before Parliament this week. If you’re caught running a party that has got out of hand, you’re in for the legal high-jump. Basically, if you’re caught running or attending an “out-of-control” party, or “Facebook party” as it’s being bastardised as under these new laws, you’ll face a maximum penalty of 12 months jail or a fine of $12,100. If police experience resistance, or “aggravated and violent circumstances” as it’s described, that fine goes up to $18,150 or a penalty of three years in jail. Worse still, parents of party hosts may be dragged into the mix and face the same jail term or fine amount as the kids organising or attending the parties under the new law. It’s a little vague calling these events “Facebook parties”, considering that you don’t exactly need the Facebook platform to host a party that can get out of control. 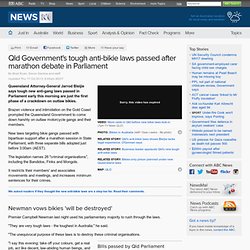 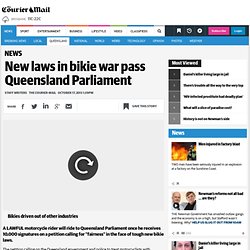 Queensland is now one of a few states attempting to target and prevent crimes associated with motorcycle gangs. Same-sex marriage. 10 February 2012 Mary Anne Neilsen Law and Bills Digest Section Contents Introduction. Marriage, weddings and registered relationships. MARRIAGE ACT 1961. High Court throws out ACT's same-sex marriage laws. Updated After being married for less than a week, same-sex couples who wed in the ACT will have their unions annulled after the High Court ruled against the laws. The High Court unanimously ruled that the ACT's laws were inconsistent with the Federal Marriage Act, and were therefore unconstitutional. The ruling is a victory for the Commonwealth, which had launched the appeal against the laws. Queensland needs harsher sentences for murderers.

LIFE should mean a person's actual life, not just 15 years. This has been the sentiment of people on social media in the past few days - since Brett Peter Cowan was sentenced for murdering Sunshine Coast teenager Daniel Morcombe. The issue has been raised before and it is something that needs to be addressed in this state as other states have made moves in the past to up the ante on punishments for serious crimes. More Jail Time For Murders And Attacks On Police In Queensland. Murderers and people convicted of attacking police offers will face longer jail time under changes passed by State Parliament. CRIMINAL CODE - SECT 305 305 Punishment of murder. [Index] [Table] [Search] [Search this Act] [Notes] [Noteup] [Previous] [Next] [Download] [Help] 305 Punishment of murder (1) Any person who commits the crime of murder is liable to imprisonment for life, which can not be mitigated or varied under this Code or any other law or is liable to an indefinite sentence under part 10 of the Penalties and Sentences Act 1992. (2) If the person is being sentencedâ€”