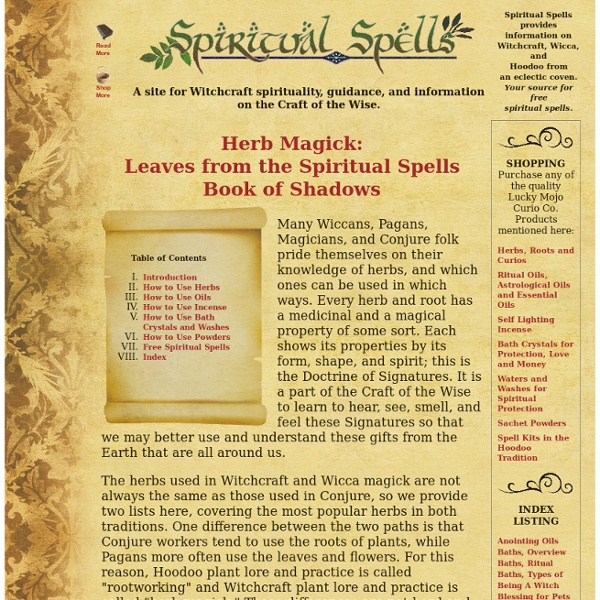 Many Wiccans, Pagans, Magicians, and Conjure folk pride themselves on their knowledge of herbs, and which ones can be used in which ways. Every herb and root has a medicinal and a magical property of some sort. Each shows its properties by its form, shape, and spirit; this is the Doctrine of Signatures. The herbs used in Witchcraft and Wicca magick are not always the same as those used in Conjure, so we provide two lists here, covering the most popular herbs in both traditions. Two books that we recommend to our own Coven members, and which we believe will set you on the path of discovery about the wonderful subject of herbal spell-crafting are: Related:  dianemarycowan2

Ethical Spell-Casting - Wicca and Witchcraft Whether simple or complex, all spells involve focusing the power of intention to produce outcomes. Your intention not only provides the fuel that energizes a spell, it also colors the spell. As discussed in Chapter 1, your motive for doing a spell determines whether it's “white” or “black” magick, or somewhere in between. There's nothing wrong with doing “gray” spells — most spells, in fact, fit into this category. It's not incorrect or selfish to use your magickal talents to improve your lot in life. Black magick doesn't always involve the ritual of casting a spell. It's also important to feel good about the spells you do. HERBAL CORRESPONDENCES: Magic Herbs - Herb Magick Herbs, resins, and other organic materials can be used in a variety of forms such as their natural form, dried, or in oils, powders, and incenses. And while there may be differences in the way they are used, the properties of the herbs and resins and their effects remain the same. Herb applies to a wide range of plants, including: grasses, trees, shrubs, weeds, roots, barks, and the flowers of any plant used for healing, magic spells and rituals, witchcraft, Wicca, or other purposes. Herbs and their by-products have been used for thousands of years by humans and other animals for healing. Herbs have many possible uses: Charms and Sachets Incense Bath Oils Teas The correspondences listed here include each herb's botanical name, common name, ruling planet, dominant element, any associated deity, and its magical properties. The first two lists are "quick and dirty" references. SUN: peony, sunflower, saffron, cinnamon, laurel MOON: hyssop, rosemary, moonflower, moonwort, garlic Dill: Love.

Novel Revision Stage I: Plot Can we talk about the fact that every time I reach a new stage in the novel writing process, Chuck Wendig writes a thorough, lengthy post about how to work through that exact thing? I’m tempted to just link to that article and call it a day. However, I think (hope) that my experiences as a first-time novelist could be helpful to some people, too…Right? Aren’t they? And every piece of writing advice is just that: advice. I’ve included relevant links at the bottom of this post to other writing bloggers and the Tumblr writing community in general that helped me formulate my own revision plan. Revision Strategies: Some Options It’s difficult to decide where to begin tackling the first draft of a novel. From Emma Darwin: Think about a list headed “Renovate the House”. Chuck Wendig also discusses some different strategies for approaching the monstrosity that is your novel. My Personal Revision Plan First: I’m going to read through the entire thing. Stage I: Plot The beginning. Yay new challenges!

Viking Age The Viking Age is the period from 793 to 1066 in European history, especially Northern European and Scandinavian history, following the Germanic Iron Age. It is the period of history when Scandinavian Norsemen explored Europe by its seas and rivers for trade, raids and conquest. In this period, the Vikings also settled in Norse Greenland and Newfoundland, and present-day Faroe Islands, Iceland, Normandy, Scotland, Ireland, Russia and Anatolia.[2] Historical considerations[edit] In England, the Viking Age began on 8 June 793[3] when Vikings destroyed the abbey on Lindisfarne, a centre of learning that was famous across the continent. Vikings were portrayed as uniformly violent and bloodthirsty. The first challenges to the many anti-Viking images in Britain emerged in the 17th century. In Scandinavia, the 17th century Danish scholars Thomas Bartholin and Ole Worm and Swedish scholar Olaus Rudbeck were the first to use runic inscriptions and Icelandic Sagas as primary historical sources.

Basic Tips For Writing Orthodox Jews This article was contributed by Shira M. Rabinowitz. Thanks so much, Shira! More and more these days, Jewish characters appear in fiction, both non-Orthodox and allegedly Orthodox - most of the time when they're supposed to be Orthodox, they really aren’t. Orthodox Jews wear different clothes. Generally, women will wear skirts to or past the knee, sleeves to or past the elbow, and necklines to or above the collarbone. Men wear semi-formal clothes and never go without having their head covered, whether by a kippah, a hat, or something else. Men will also carry with them a bag containing a large four-cornered garment with tassels at the edges (tallis) and phylacteries (tefillin). Orthodox Jews eat different food. We only eat kosher food. A few examples of hechsherim (symbols certifying that a food item is kosher) that are generally accepted are the OU, the OK, the StarK, and the ChofK. Orthodox Jews keep Shabbos (the Jewish Sabbath). We don’t turn electronics on and off on Shabbos. -Shira M.

A history of the Viking world – in 10 extraordinary objects | Art and design New Valkyrie, 800 This little pendant from Denmark was unearthed just over a year ago. It is the only known three-dimensional Viking-age valkyrie. Literally "choosers of the slain", valkyries were imagined as terrifying spirits of war and companions of the god Odin, female figures who ushered dead warriors from the battlefield to Valhöll, the hall of the slain (called Valhalla by the Victorians). Figures like this may represent a range of supernatural forces including goddesses, valkyries or spirits. Weighing scales, 1000-1200 Contact with the Islamic world introduced the use of precious metals as a means of exchange in the ninth century. Hunterston brooch, 700 Our stereotypical view of the Vikings is bloodthirsty raiders, destroying everything they came across. Vale of York Hoard, 900s This is the whole Viking world in one cup. Hogback tombstone, ninth-11th centuries Ardnamurchan burial, late ninth/early 10th century Hiddensee hoard, late 10th century Winchester manuscript, 1031

6 Real Places on Earth Straight Out of a Fantasy Novel Honestly, we're sick of hearing about the planet's freaking natural beauty. Yes, those snow-capped mountains are very nice, and we're sure those white sand beaches of St. Barts are even prettier in person. But if we're adding vacation spots to our Bucket List, we're going for the weird shit. You see, every once in a while the malevolent robot lords in charge of programming the shared illusion that is our world will slip up and let a chunk of broken code go through, resulting in geographical phenomena that defies explanation. Like ... #6. Michael Day The three lakes of Kelimutu, in addition to sounding like the title of a fantasy novel, are a geological oddity found snuggled up against the base of a dormant volcano in Indonesia. Tom CasadevallIt's entirely possible that they are giant bowls of melted chameleons. Each lake can change its color completely at any time, independently of the other lakes. Rosa CabecinhasA million people pooped in this one. Neil/WikimediaRIP, Kermit and Rowlf. #5.

Board Game: VIKINGS: The North American Saga This is an old Norse game that is found in many Viking and Norse sites. It consists of a board (which can be cardboard or even paper) and game pieces. Students can make their own board and playing pieces and challenge each other to games until there are two champions of the class. The appendix includes a starting board layout and information on the game. The Old Norse played and a lot of board and card games in the winter. Can you guess why? Hnefatafl (or hneftafl) [Nhev-eh-TAH-full] means the "king's board or game". SET-UP: Hnefatafl simulates a Viking raid. On the set-up diagram (above) attacking warriors are represented by the horizontal striped circles while the defenders are vertically striped. For our game, the attackers are made of antler disks, the defenders of glass drops, and the king is pewter. The attackers' goal is to capture the king. This can be done by surrounding the king on all four sides of the center square. Players play only one piece at a turn.