What motivates us at work? 7 fascinating studies that give insights 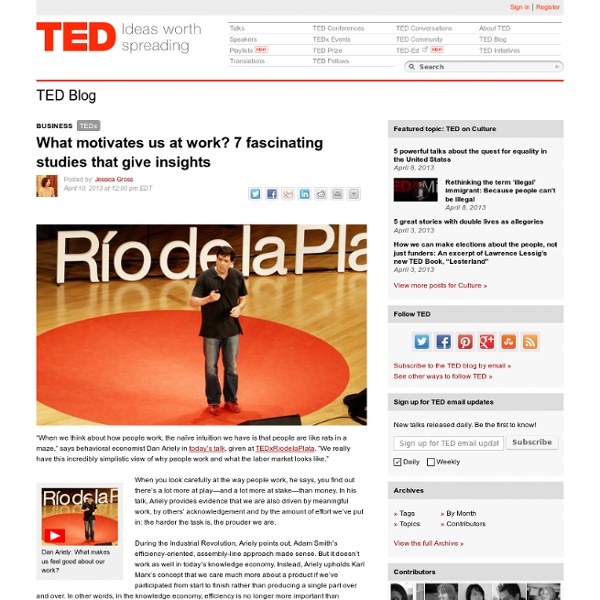 “When we think about how people work, the naïve intuition we have is that people are like rats in a maze,” says behavioral economist Dan Ariely in today’s talk, given at TEDxRiodelaPlata. “We really have this incredibly simplistic view of why people work and what the labor market looks like.” Dan Ariely: What makes us feel good about our work?When you look carefully at the way people work, he says, you find out there’s a lot more at play—and a lot more at stake—than money. In his talk, Ariely provides evidence that we are also driven by meaningful work, by others’ acknowledgement and by the amount of effort we’ve put in: the harder the task is, the prouder we are. During the Industrial Revolution, Ariely points out, Adam Smith’s efficiency-oriented, assembly-line approach made sense. To hear more on Ariely’s thoughts about what makes people more productive – and happier – at work, watch this fascinating talk. What have you noticed makes you work harder – and better?

Survival of the ... Nicest? Check Out the Other Theory of Evolution by Eric Michael Johnson A new theory of human origins says cooperation—not competition—is instinctive. posted May 03, 2013 A century ago, industrialists like Andrew Carnegie believed that Darwin’s theories justified an economy of vicious competition and inequality. They left us with an ideological legacy that says the corporate economy, in which wealth concentrates in the hands of a few, produces the best for humanity. 9 Free Online Courses You Should Take by Johnny Webber 1. How to Reasons and Argue – Reasoning is important. This course will teach you how to do it well. How to connect deeply with anyone (in 5 minutes) 468k shares Share on Facebook Share on Twitter I’m going to share a game with you. This game will reveal incredible things about whoever plays it; surprise, shock and delight complete strangers, and has kickstarted more friendships than I know how to count.

Research, education tools and blog for building a professional learning community Professional Learning Community (PLC) An ongoing process in which educators work collaboratively in recurring cycles of collective inquiry and action research to achieve better results for the students they serve. Professional learning communities operate under the assumption that the key to improved learning for students is continuous job-embedded learning for educators. Read what PLC advocates say about the impact of professional learning communities. What Are Professional Learning Communities? In rich and poor nations, giving makes people feel better than getting, research finds Feeling good about spending money on someone else rather than for personal benefit may be a universal response among people in both impoverished countries and rich nations, according to new research published by the American Psychological Association. "Our findings suggest that the psychological reward experienced from helping others may be deeply ingrained in human nature, emerging in diverse cultural and economic contexts," said lead author Lara Aknin, PhD, of Simon Fraser University in Canada. The findings provide the first empirical evidence that "the warm glow" of spending on someone else rather than on oneself may be a widespread component of human psychology, the authors reported in the study published online in APA's Journal of Personality and Social Psychology. Researchers found a positive relationship between personal well-being and spending on others in 120 of 136 countries covered in the 2006-2008 Gallup World Poll.

50 Things You Should Stop Buying & Start Making As a society, we have become over-reliant on “ready made” products. We have lost the ability to make things from scratch. Rather than blend up some peanuts to make delicious, tasty and fresh peanut butter, we’ll spend many dollars on a jar from the store that contains artificial preservatives, unnecessary packaging and that simply lines the pockets of huge, unethical multinational corporations. Aside from foods, you can also make your own personal care products, beauty and make up products, cleaning products and home accessories that taste, work or look better than store bought, without the harmful chemicals and toxins and free from excessive, earth damaging packaging.

Life is a game. This is your strategy guide 682k shares Share on Facebook Share on Twitter Real life is the game that – literally – everyone is playing. But it can be tough. This is your guide. Basics You might not realise, but real life is a game of strategy. Daniel Kahneman on Making Smarter Decisions The bestselling author of Thinking, Fast and Slow talks about overcoming the cognitive biases and errors that can affect decision-making. You can avoid decision-making mistakes by understanding the differences between these two systems of thought. Nobel winner Daniel Kahneman says we tyically fear loss twice as much as we relish success.

10 Drills To Make You A Skilled Concealed Carrier You’ve chosen to carry a weapon concealed for your personal protection and that of your family. But you’ve eschewed specialized training and chosen instead to rely upon your personal knowledge, the stuff you have read in written self-defense and firearm publications, and the common sense that has gotten you to this point in the first place. After all, mama didn’t raise a fool. You’ve been pretty successful at staying alive to this point, so the following is intended as a basic guideline to enhance your current set of skills. The following is what I call the 30-round defensive shooting scenario. 15 Things That Emotionally Strong People Don't Do There is a particular aspect of mental strength that is the deciding factor of whether or not you will have a good life. There are many levels to mental strength and all are needed to be successful and happy. The one particular area of mental strength that has the greatest impact is that of emotional strength.

13 YouTube Channels That Will Make You More Awesome - New Media Rockstars Look, normally we use hyperbole in articles — everything is the GREATEST OR THE ABSOLUTE WORST or MOST RAPEY! That’s the stuff that makes people click on articles, so in a way it’s your fault. But this time, we’re committed to actually delivering on the hyperbole. We want to make you a better, more well-rounded person. NMR wants you to be able to walk into a room and hold a conversation with anyone about a topic of their choosing. Of course, while that creates an infinitesimal number of potential conversation topics that we can’t possibly cover, these 13 channels will get you much closer to the goal we have selected for you.

How money helps us trust each other What makes money essential for the functioning of modern society? An international group of researchers from Switzerland, Italy and the U.S. have shown through an experiment how money helps modern societies prosper by fostering cooperation among strangers. As a species, human survival depends on cooperation, which our ancestors developed by banding together in small, close-knit groups of individuals who thrived by reciprocating help over time. 38 Survival Downloads and Handbooks – Pioneering, SHTF, Engineering, Urban Gardening, Defense, and More Posted on Aug 16, 2013 in Emergency Preparedness & Survival, Featured Articles, Urban Gardening, Farming & Homesteading Kevin Hayden – TruthisTreason.net If you find this material helpful, please consider donating $1 or $2 to the website!