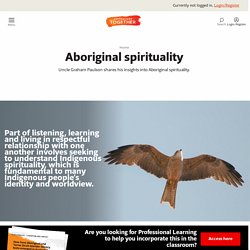 It gives meaning to all aspects of life including relationships with one another and the environment. All objects are living and share the same soul and spirit as Aboriginals. There is a kinship with the environment. Aboriginal spirituality can be expressed visually, musically and ceremonially. " (Grant, 2004) Part of listening, learning and living in respectful relationship with one another involves seeking to understand Indigenous spirituality, which is fundamental to many Indigenous people’s identity and worldview. Someone with extensive knowledge of this topic is Indigenous Elder, Graham Paulson. 1. In an animistic world every thing is interconnected, people, plants and animals, landforms and celestial bodies are part of a larger reality. A healthy respect for the power of spirit forces is learned from early childhood, particularly in relation to religious or social taboos. 2. 3. 4. 5. 6.

What Is a Worldview? by James Sire. [Editor's Note: The following is adapted from the introduction of James Sire's book The Universe Next Door, Fifth Edition. 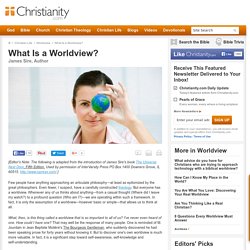 Used by permission of InterVarsity Press PO Box 1400 Downers Grove, IL 60515. Few people have anything approaching an articulate philosophy—at least as epitomized by the great philosophers. Even fewer, I suspect, have a carefully constructed theology. But everyone has a worldview. Whenever any of us thinks about anything—from a casual thought (Where did I leave my watch?) Religion: Religions. Worldview - an overview. Western Worldview Western worldviews of social work dominate the literature. 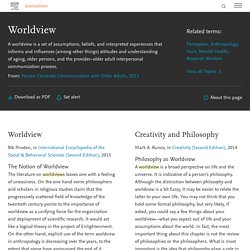 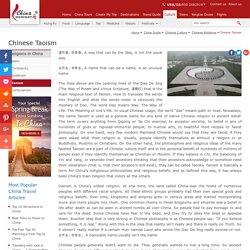 A way that can be the Way, is not the usual way. 名可名，非常名。 A name that can be a name, is an unusual name. Taoism in China, Authentic Chinese Religions. Panentheism. 1. 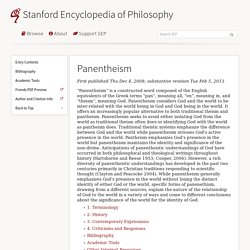 Terminology Because modern “panentheism” developed under the influence of German Idealism, Whiteheadian process philosophy, and current scientific thought, panentheists employ a variety of terms with meanings that have specialized content. Theological terms as understood by panentheists: 1. PANTHEISM: Nature, universe, science and religion. [an error occurred while processing this directive] by Paul Harrison. 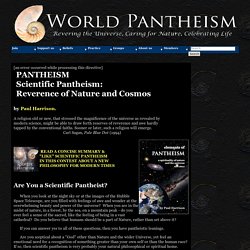 A religion old or new, that stressed the magnificence of the universe as revealed by modern science, might be able to draw forth reserves of reverence and awe hardly tapped by the conventional faiths. Sooner or later, such a religion will emerge. Carl Sagan, Pale Blue Dot (1994) Are You a Scientific Pantheist? Theism. Theism is broadly defined as the belief in the existence of the Supreme Being or deities.[1][2] In common parlance, or when contrasted with deism, the term often describes the classical conception of God that is found in monotheism (also referred to as classical theism) - or gods found in polytheistic religions—a belief in God or in gods without the rejection of revelation as is characteristic of deism.[3][4] Atheism is commonly understood as rejection of theism in the broadest sense of theism, i.e. the rejection of belief in God or gods.[5] The claim that the existence of any deity is unknown or unknowable is agnosticism.[6][7] Etymology[edit] 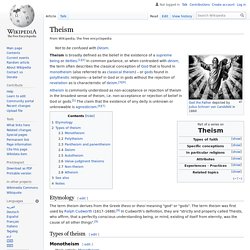 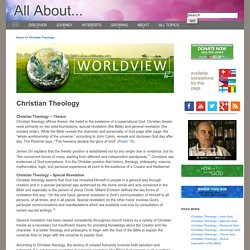 Christian theism rests primarily on two solid foundations: special revelation (the Bible) and general revelation (the created order). While the Bible reveals the character and personality of God page after page, the “whole workmanship of the universe,” according to John Calvin, reveals and discloses God day after day. The Psalmist says, “The heavens declare the glory of God” (Psalm 19). James Orr explains that the theistic position is established not by any single clue or evidence, but by “the concurrent forces of many, starting from different and independent standpoints.”1 Christians see evidences of God everywhere. 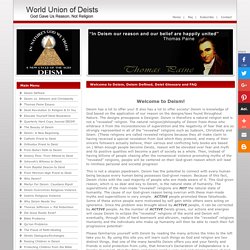 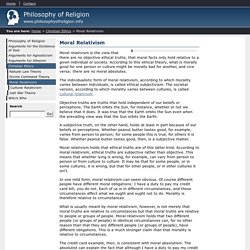 According to this ethical theory, what is morally good for one person or culture might be morally bad for another, and vice versa: there are no moral absolutes. The individualistic form of moral relativism, according to which morality varies between individuals, is called ethical subjectivism. The societal version, according to which morality varies between cultures, is called cultural relativism. Objective truths are truths that hold independent of our beliefs or perceptions. BBC - Religions - Islam: Sunni and Shi'a. Sunnis and Shia: Islam's ancient schism. Image copyright AP The divide between Sunnis and Shia is the largest and oldest in the history of Islam.

Members of the two sects have co-existed for centuries and share many fundamental beliefs and practices. But they differ in doctrine, ritual, law, theology and religious organisation. Their leaders also often seem to be in competition. Sunni Islam - Oxford Islamic Studies Online. The Sunnis are the largest branch of the Muslim community, at least 85 percent of the world's 1.2 billion Muslims. The name is derived from the Sunnah, the exemplary behavior of the Prophet Muhammad . All Muslims are guided by the Sunnah, but Sunnis stress it, as well as consensus (ijma; the full name of Sunnis is Ahl al-Sunnah wa'l-Ijma, people of the Sunnah and consensus).

The other branch of Islam, the Shiis, are guided as well by the wisdom of Muhammad's descendants, but through his son-in-law Ali . A religious worldview grounded in the sciences, the humanities, and the arts. Home page of NSW Humanists. Agnosticism. BBC Great site (search within for all) Religion: Atheism. Apatheists: The People Who Just Don’t Care About Religion. Thank you for your interest in Patheos newsletters!

Please enter your email address below and click the "Subscribe" button. Thank you for your subscription. You can visit your Preference Center to complete your profile and see what else we have to offer. We apologize, we were unable to complete your subscription at this time, please try again later. If this error persists please contact us at communications@patheos.com. Like what you're reading? Order of the Solar Temple. Heaven's Gate - How and When It May Be Entered. BRANCH DAVIDIANS (STUDENTS OF THE SEVEN SEALS) He founded the Mt. Carmel Center near Waco TX with 11 followers in 1935.

He called the group "The Shepherd's Rod" after his book title. They attempted to recruit membership from within the SDA church with only modest success. In 1942, he broke completely away from the SDA because the latter refused to grant conscientious objector status to its members during World War II. He selected the name Davidian Seventh-Day Adventists for his organization. After Houteff's death in 1955, control of the Davidians passed to his wife Florence. The Branch Davidians. On February 28, 1993 at approximately 9:30 a.m., 100 lawmen from the Alcohol, Tobacco, and Firearms division of the United States Treasury Department descended on a religious compound owned and operated by the Branch Davidian cult 10 miles east of Waco, Texas.

Their objective was to serve a search warrant for illegal firearms and explosives, and arrest the cult’s leader, David Koresh, on weapons charges. Unfortunately, Koresh and his group had been tipped off and were waiting as authorities approached. Without warning, gunfire erupted and law enforcement officials found themselves facing cult members armed with explosive devices, military assault rifles, and other semi-automatic weapons. The sound of massive firepower echoed in the compound for 45 minutes, ending only after law enforcement personnel had retreated to safety.

It is the view that humans define their own meaning in life, and try to make rational decisions despite existing in an irrational universe. Definition of terms: cults, sects, denominations. Amish Beliefs, Practices, and Customs. By Jack Zavada. Amish. What Do Quakers Believe? What Are Their Beliefs on Jesus? Religious Society of Friends (Quakers) in Australia Inc. Jehovah’s Witnesses—Official Website: jw.org. Beliefs: The Official Site of the Seventh-day Adventist world church. Religion: Mormonism. Our Beliefs » salvos.org.au/ Our Beliefs The Salvation Army has 11 faith-based statements called doctrines that summarise its religious beliefs. The Salvation Army’s statements place it in harmony with other mainstream denominations of Protestant Christianity.

The New Age Movement- What Is It? What is 'New Age' Religion, and Why Can't Christians Get on Board? -Spiritual Living, Christian Faith. If you haven't run into it before, it would be hard to avoid it now. Introduction to Nihilism. Nihilism. Indigenous Religions - World Religions Reference Library. Religion. Religion: Bahá'í. Australian Baha'is > Home. BBC - My Faith: Hinduism. The Buddhist Centre. Human Nature and the Purpose of Existence.