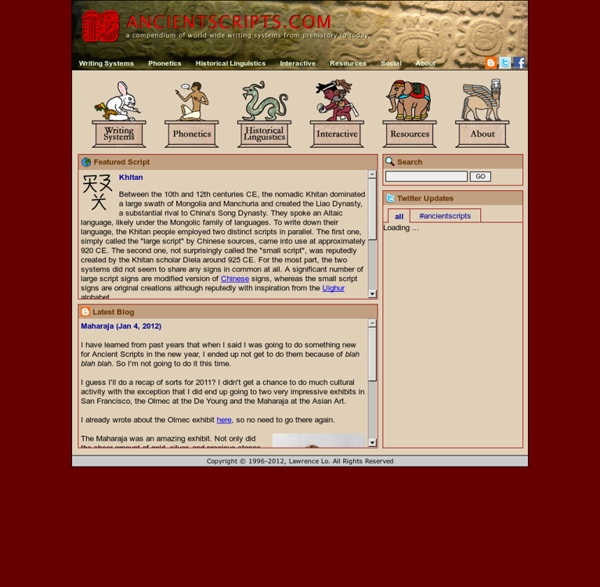 Khitan Between the 10th and 12th centuries CE, the nomadic Khitan dominated a large swath of Mongolia and Manchuria and created the Liao Dynasty, a substantial rival to China's Song Dynasty. They spoke an Altaic language, likely under the Mongolic family of languages. To write down their language, the Khitan people employed two distinct scripts in parallel. The first one, simply called the "large script" by Chinese sources, came into use at approximately 920 CE. The second one, not surprisingly called the "small script", was reputedly created by the Khitan scholar Diela around 925 CE.

Bizzare Google Request In General | 166 comments | permalink Here is a bizzare e-mail discussion I had with a guy who contacted me yesterday. xxxUPDATExxx I have posted the second part of this, you can view it here: Second bizarre email ——-Original Message——- From: xxxxx xxxxxxxxx Date: 12/8/2006 xx:xx:xx PM To: Dean Hunt Subject: DeanHunt.com Google Removal Request Hello Dean, My First Eight Drains My First Eight Drainsby drainer-wannabe Ninjalicious Meters below the busy streets above, a hidden concrete utopia snakes its way from the downtown core out beyond the suburbs. Concrete pipes conduct our urban stormwater to strange fringe areas known as forests, meadows, riverbanks and seashores — a gallery of horrors collectively known as nature.

7 Man-Made Substances that Laugh in the Face of Physics The universe is full of weird substances like liquid metal and whatever preservative keeps Larry King alive. But mankind isn't happy to accept the weirdness of nature when we can create our own abominations of science that, due to the miracle of technology, spit in nature's face and call it retarded. That's why we came up with... #7. Ferrofluids What do you get when you suspend nanoparticles of iron compounds in a colloidal solution of water, oil and a surfactant? List of timelines From Wikipedia, the free encyclopedia This is a list of timelines currently on Wikipedia. §Types[edit] §General timelines[edit]

Flying Flying is also fun and challenging. You have to think and act in three dimensions. You have the freedom to move to a lot of new spots on the globe. You learn to examine and appreciate scenery and natural phenomena that you'd never be able or wouldn't bother to see from the ground. Charles Lindbergh put it best: "Science, freedom, beauty, adventure." Sadly Lindbergh was, in addition to being a great aviator, a supporter of the Nazis. 10,000 Shipping Containers Lost At Sea Each Year…Here’s a Look At One We lose 10,000 of these things every year! (c) 2004 MBARI Right now, as you read this, there are five or six million shipping containers on enormous cargo ships sailing across the world’s oceans. And about every hour, on average, one is falling overboard never to be seen again.

CHUKCHEE HOMEPAGE Table of contents Note: you are free to use the material on this website for academic research purposes or for teaching. However, you do NOT have permission to use this material for any commercial purpose whatsoever. This is a website for linguists interested in learning something about the grammatical structure of Chukchee and who either don't read Russian or have difficulty gaining access to Russian-language sources. Start-up to release 'stone-like' optical disc that lasts forever News August 8, 2011 06:05 AM ET Recordable optical media such as CDs, DVDs and Blu-ray discs are made of layers of polycarbonate glued together. One layer of the disk contains a reflective material and a layer just above it incorporates an organic transparent dye. During recording, a laser hits the die layer and burns it, changing the dye from transparent to opaque creating bits of data. A low power laser then can read those bits by either passing through the transparent dye layer to the reflective layer or being absorbed by the pits.

A Whirlwind Tutorial on Creating Really Teensy ELF Executables for Linux (or, "Size Is Everything") She studied it carefully for about 15 minutes. Finally, she spoke. "There's something written on here," she said, frowning, "but it's really teensy." OLAC Language Resource Catalog n.a. 2014. Max Planck Institute for Evolutionary Anthropology. Lewis, William. 2007-06-27. California State University, Fresno, ODIN project.

Related:
Related:  Popoli antichi e lingue   -  Archean Eon: 3.85 to 2.5 billion years ago   -  Neoarchean Era: 2.8 to 2.5 billion years ago   -  Cover Letters   -  A Long Time ago in the Nam   -  Cover Letters   -  Hebrew - Letter by letter   -  Writing Letters   -  Long Ago   -  Letters   -  Judaism   -  Heaven Letters   -  Resumes, cover letters and social media   -  Cover letters   -  Judaism - Wikipedia, the free encyclopedia   -  Jewish Fairy Tales and Legends Index   -  9,000 B.C. - 3,000 B.C.   -  What motivates us at work? 7 fascinating studies that give insights | TED Blog   -  The Habits Of Supremely Happy People | The Huffington Post   -  Spiritual Spells: Herbal Magick Book of Shadows   -  histomap-jpg.jpeg (JPEG Image, 1280 × 3486 pixels) - Scaled (28%)   -  Crocodile Stitch Flower   -  Alice in Quantumland: A Charming Illustrated Allegory of Quantum Mechanics by a CERN Physicist | Brain Pickings   -  Stop Making Plans: How Goal-Setting Limits Rather Than Begets Our Happiness and Success | Brain Pickings   -  The Nature of the Self: Experimental Philosopher Joshua Knobe on How We Know Who We Are | Brain Pickings   -  Barry Schwartz: The paradox of choice | TED Talk   -  Shawn Achor: The happy secret to better work   -  Alain de Botton: A kinder, gentler philosophy of success   -  Matthieu Ricard: The habits of happiness   -  11 ways you are thoroughly (but interestingly) wrong | 22 Words   -  Unbelievable Skeletons Unearthed From The Catacombs Of Rome   -  Sam Harris: Science can answer moral questions   -  Kierkegaard on Our Greatest Source of Unhappiness | Brain Pickings   -  Kurt Vonnegut on Reading, Boredom, Belonging, and Hate | Brain Pickings   -  Pearltrees 2.0 Launches with a Brand New User Interface   -  Julian Treasure: How to speak so that people want to listen   -  30 Things To Start Doing For Yourself   -  A Guide for the Perplexed: Mapping the Meaning of Life and the Four Levels of Being | Brain Pickings