The Habits Of Supremely Happy People 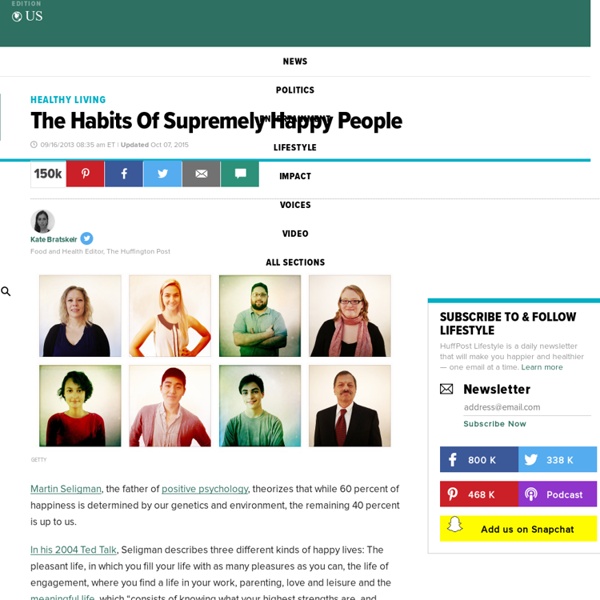 Martin Seligman, the father of positive psychology, theorizes that while 60 percent of happiness is determined by our genetics and environment, the remaining 40 percent is up to us. In his 2004 Ted Talk, Seligman describes three different kinds of happy lives: The pleasant life, in which you fill your life with as many pleasures as you can, the life of engagement, where you find a life in your work, parenting, love and leisure and the meaningful life, which “consists of knowing what your highest strengths are, and using them to belong to and in the service of something larger than you are.” After exploring what accounts for ultimate satisfaction, Seligman says he was surprised. The pursuit of pleasure, research determined, has hardly any contribution to a lasting fulfillment. Instead, pleasure is “the whipped cream and the cherry” that adds a certain sweetness to satisfactory lives founded by the simultaneous pursuit of meaning and engagement. They smile when they mean it. They unplug.

You too can be happy. Really. A Q&A with Shawn Achor Photo courtesy TEDxBloomington. “We think we have to be successful, then we’ll be happier. But the real problem is our brains work in the opposite order,” said Shawn Achor in his charming, immensely popular TED Talk from TEDxBloomington, “The happy secret to better work.” Achor is the CEO of consulting firm Good Think, which conducts research on positive psychology and helps people apply it to be happier and more effective at work. His 2011 talk drew on the research from his bestselling book on positive psychology, The Happiness Advantage, and since then he’s had a new question on his mind: Why are some people able to make positive changes in their lives, while others remain stuck in their ways? His latest book, Before Happiness, published last week by Random House, addresses just this question.

Conor Cusack: Depression is a friend, not my enemy Conor Cusack Published 29/10/2013|07:34 Share 01 of 2 I still remember the moment well. The Importance of Personal Projects Personal projects are an often overlooked part of a professional career – be it games, embedded, or even web development. There’s only so much you will be exposed to in an office environment, where you can lean on others for areas that aren’t your specialty. But when it comes to personal projects, you have to be a jack of all trades. This is the reason I ask about hobbies and personal projects of those who I interview and those for whom I interview with (interviews go both ways remember!). It’s not something I ask because I want to know if you’ll be my buddy, even though that is very important factor in selecting coworkers in my opinion, but because it is one of the most clear indicators of a curious and active mind – and that trait is very important.

5 Scientific Ways to Build Habits That Stick “We are what we repeatedly do. Excellence then, is not an act, but a habit.” Sobering words from Aristotle, and an astute reminder that success doesn’t come overnight. 20 Things Every Twentysomething Should Know How to Do First things first, most twentysomethings are too hard on themselves. It’s one of the downsides of a youth-obsessed culture. We tend to think if we haven’t published our first book, planted our first church or gotten married by the time we’re 30, then we’re on the fast track for a lonely, penniless death which will be mourned by none. Sure, some people get famous when they turn 25. theconversation Australian government policy and happiness research are pointing in very different directions. A prime goal of government policy is economic growth. Many Australians go along with this, assuming that more money will make them happier. However, policy and common belief need to confront an increasing body of research that suggests a different approach to improving well-being.

15 TED Talks That Will Change Your Life Feel like getting inspired, motivated or just looking for a feel-good cry? Then look no further. There's no better way to start your day than with a fresh cup of coffee and a nice TED talk to make you feel ready to take on your day. TED — which stands for Technology, Entertainment and Design — features "ideas worth spreading." The speaker series launched in 1984, and there are now more than 1,400 TED talks available online.

Your Employees Want the Negative Feedback You Hate to Give - Jack Zenger , and Joseph Folkman by Jack Zenger and Joseph Folkman | 1:00 PM January 15, 2014 Would you rather hear positive feedback about your performance or suggestions for improvement? For the last two weeks, we’ve been compiling data on this question, and on people’s general attitudes toward feedback, both positive and corrective.