FREE COMICS — History Comics and comics in education. Free Comics - let me know if you have others to add! 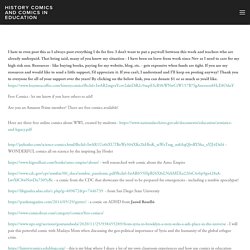 Are you an Amazon Prime member? There are free comics available! - a powerful comic from ABC News and Marvel focusing on one mother’s struggle to help her family survive during the Syrian Conflict. This is how I use it in my classroom - Jarrett J. . - an excellent all encompassing look at the US government and the role of its citizens. . - a great comic by Andrew Aydin (of the March Trilogy!)

8 of the Best Comic Adaptations of Classics. During the summer, I always get ambitious with my reading plans, and every year, they usually involve picking up a classic I never got around to reading. 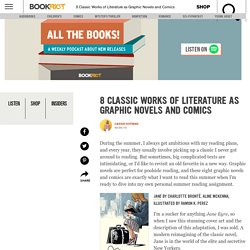 But sometimes, big complicated texts are intimidating, or I’d like to revisit an old favorite in a new way. Graphic novels are perfect for poolside reading, and these eight graphic novels and comics are exactly what I want to read this summer when I’m ready to dive into my own personal summer reading assignment. Jane by Charlotte Brontë, Aline McKenna, illustrated by Ramon K. Perez. Buffalo and Erie County Public Library System. Little red ridinghood. Monthly Diamond BookShelf e-Newsletter featuring comprehensive information on the latest graphic novels, interviews with creators and professionals like you, along with useful tools such as reviews, bestsellers and more. Like This? 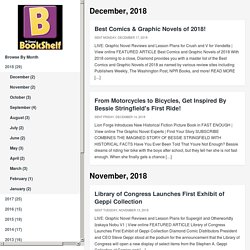 Subscribe by email: December, 2018. This Graphic Novel Scratch-Off Chart Lets You Track Your Comic Reading List. With so many comic books being adapted into some of the most popular movies and television shows in Hollywood right now, you might find yourself wanting to go back to their roots on the page. 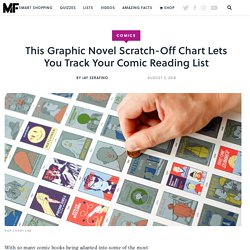 But reading through the world’s most celebrated graphic novels isn’t so simple. There are so many different genres, publishers, and styles to choose from, making it overwhelming to find a proper starting point. This new scratch-off poster from the folks at Pop Chart Lab solves that problem by turning that daunting reading list into a colorful piece of home decor. The chart features illustrated icons from dozens of different graphic novels from all around the world. Though you’ll recognize familiar sights like the bat signal from Frank Miller’s The Dark Knight Returns and Spider Jerusalem from Transmetropolitan, they’ll be colored in a drab grey. 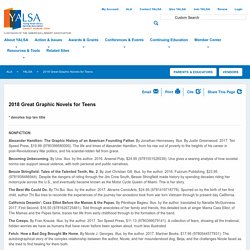 By Jonathan Hennessey. Illus. By Justin Greenwood. 2017. Ten Speed Press, $19.99 (9780399580000). Becoming Unbecoming. Bessie Stringfield: Tales of the Talented Tenth, No. 2. The Best We Could Do. California Dreamin’: Cass Elliot Before the Mamas & the Papas. The Creeps. How Can I Organize My Research? Books Summer Reader Poll: 100 Favorite Comics And Graphic Novels. We've searched shelves, shops and sites across the universe to bring you some really great comics. 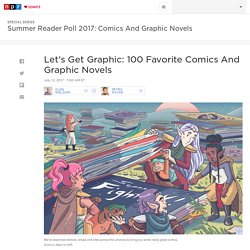 Shannon Wright for NPR hide caption toggle caption Shannon Wright for NPR We've searched shelves, shops and sites across the universe to bring you some really great comics. Summer's the time for comics — Marvel and DC blockbusters are in movie theaters, fans are preparing to descend on San Diego for its epic annual Comic-Con, and if nothing else, your friendly local comic store or library is there to provide an air-conditioned Fortress of Solitude where you can escape the steamy streets. Books Summer Reader Poll: 100 Favorite Comics And Graphic Novels. Graphic Novel Resources. Teaching Graphic Novels. University of Virginia - Academia.edu. James Bucky Carter holds a Ph.D. in English Education from the Curry School of Education at the University of Virginia. 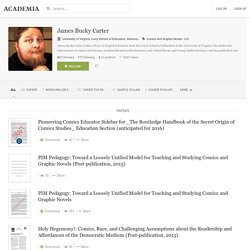 He studies the intersections of comics and literacy, multimodal and media literacies, and critical theory and Young Adult Literature, and has published and presented work to that effect in state, regional, national and international platforms. His major works include the edited collections _Building Literacy Connections with Graphic Novels_ (an NCTE best-seller) and _Rationales for Teaching Graphic Novels_ (Maupin House). and _Super-Powered Word Study_ (a Next Gen Indy Book Award nominee for Maupin House), which he coauthored with Erik Evensen.

He founded _SANEjournal: sequential art narrative in education_ and has published with ALAN, NCTE, ASCD, and MLA, among others. Nature Moscow Best List. 3 Tools for Creating Comics on iPads. This morning I received an email from a reader who was looking for suggestions for tools that her students can use to create comics on their iPads. 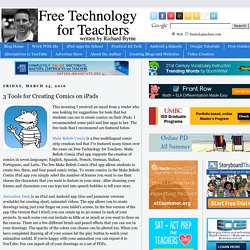 I recommended some paid and free apps to her. The free tools that I recommend are featured below. Make Beliefs Comix is a free multilingual comic strip creation tool that I’ve featured many times over the years on Free Technology for Teachers. How comics became literature — and entered serious world of academics: ‘The battle has been fought, and won’ Nick SousanisThe cover from the comic book, Lockerman, that Nick Sousanis created when he was in high school. 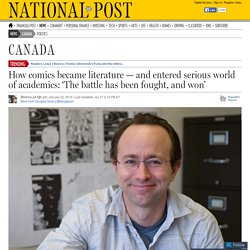 As a toddler, Nick Sousanis’ first word was Batman. How Times Have Changed: The Graphic Novels Amazon Is Promoting – Comics Worth Reading. It’s just past Christmas, so time to get people to spend those gift cards! 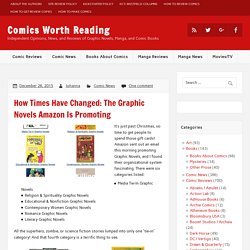 Christmas 2015: The best 7 graphic novels. Nick Sousanis's Unflattening (Harvard, £16.95) started life as the author's Columbia University PhD thesis. Entirely non-narrative, the book takes on the dichotomy between words and images in Western thought and argues that both are simultaneously involved in the production of meaning.

Executed in sharp black-and-white diagrams, and abstract and geometric images, this scintillatingly intelligent book succeeds in the great feat of holding the reader's attention not through a story but through ideas. Sousanis's own book is the perfect illustration of the inextricability of the verbal and the visual. Unlike Unflattening, William Goldsmith's second graphic novel, The Bind (Cape, £20), tells a story, and one that keeps wrongfooting the reader through its corkscrew turns. Money, Sex, Power: Should You Be Reading 'Lazarus'? When you look at the sheer range and number of original stories being told in comics form today, it’s hard to imagine a better time to be a comics reader.

Online and in print, from all around the world, artists and writers are telling stories with their own voices and styles, and there’s so much to choose from that it’s sometimes difficult to know what to read next. With Should I Be Reading… ? The Comic Book Story of Beer. First off, I love both comics and beer, so this book should be right up my alley. Second, even if I did not love both of those things I would have to admit that this book is impressive, both in its scope and execution. There are just so many things jam-packed in here about the history of human civilization: the role beer probably played in the first agricultural settlements, literary allusions to the beverage from the epic Gilgamesh and beyond, and pointed historical analyses such as how Prohibition killed off all the small breweries and led to a few monolithic companies that controlled people's tastes.

Just look at the excerpt below and notice how much they manage to fit in without overwhelming the reader: As you can see, the artwork is clear, concise, and well paced while the writing is simultaneously dense and easily navigable. Also, interspersed in all of this history is some science in the form of the chemistry behind how beer is made: