Non-Binary Person Teaches This Hateful Parent Tolerance And Their Text Exchange Goes Viral. Rain Dove, a non-binary model, has a unique policy of responding with kindness to the people who message them on Instagram, even if some of the messages initially lack it. 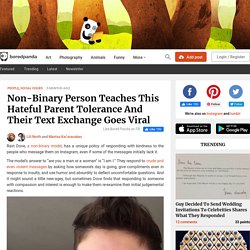 The model’s answer to “are you a man or a woman” is “I am I.” They respond to crude and even violent messages by asking how someone’s day is going, give compliments even in response to insults, and use humor and absurdity to deflect uncomfortable questions. And it might sound a little new-agey, but sometimes Dove finds that responding to someone with compassion and interest is enough to make them re-examine their initial judgemental reactions. Image credits: Rain Dove. Families say material doesn’t align with beliefs. A Regina woman is concerned issues surrounding gender and sexuality being taught in school don’t encompass all beliefs. 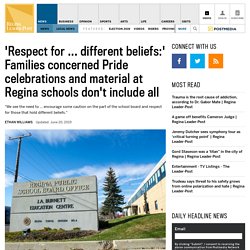 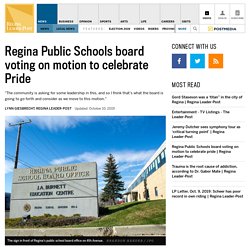 Pride celebrations in the division became a point of controversy in June, when parent Justine Taylor expressed concern to the board that celebrations of Pride Month and topics of gender and sexuality exclude those who “can’t participate” in them because of religious or moral beliefs. That same month school board trustee Aleana Young put forward a notice to the board that she would be bringing a motion in the fall. Her motion asked that “Regina Public Schools recognize and support the celebration of Pride and fly the rainbow flag at our facilities each June.”

In the lead-up to Tuesday’s board meeting, board chair Katherine Gagne said trustees have been hearing from dozens of parents on both sides of the issue. A Fantastic Woman. Restorying the wounds of education : vulnerability, hope, and the (queer) child. Dear White Gays: Stop Stealing Black Female Culture. I need some of you to cut it the hell out. 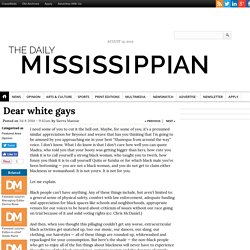 Maybe, for some of you, it’s a presumed similar appreciation for Beyoncé and weave that has you thinking that I’m going to be amused by you approaching me in your best “Shanequa from around the way” voice. I don’t know. What I do know is that I don’t care how well you can quote Madea, who told you that your booty was getting bigger than hers, how cute you think it is to call yourself a strong black woman, who taught you to twerk, how funny you think it is to call yourself Quita or Keisha or for which black male you’ve been bottoming — you are not a black woman, and you do not get to claim either blackness or womanhood.

It is not yours. It is not for you. Let me explain. Black people can’t have anything. White people are not racially oppressed in the United States of America. Mayor Jim Watson: After 40 years, I’m opening the closet door. I’m gay. 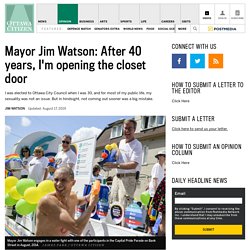 There – I said it; or rather, wrote it. Those two words took me almost four decades to utter, but as they say, “Better late than never.’’ FFC-Acrush: China's hottest new boy band is actually made up of five androgynous girls. 點擊閱讀本文繁體中文版本点击阅读本文简体中文版本 Earlier this month, China’s social network giant Tencent held a series of music events called “Husband Exhibition” at Chinese universities. 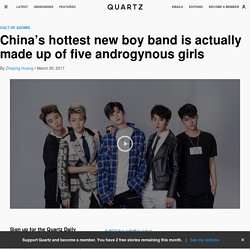 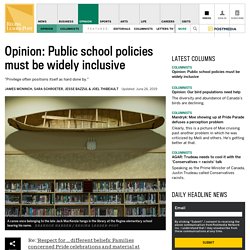 Justine Taylor’s concerns about the marginalization of those whose religious beliefs supposedly conflict with support for gender and sexual minority rights in public schools reveals how privilege often positions itself as hard done by and how “difference” is taken up in a society fractured by identity politics. The Regina Public School Board chairperson, Kathryn Gagne, is right to insist that public schools are there for “all students” and “all voices must be heard”, although this board has not been as explicit as it could be in supporting gender and sexually diverse (GSD) students, teachers, administrators, and staff. In British Columbia, in contrast, all 60 publicly funded school divisions have adopted policies and procedures to address sexual orientation and gender identity (SOGI). 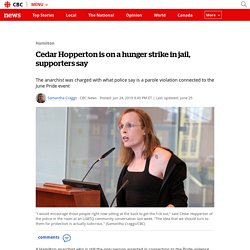 Cedar Hopperton, 33, is in the Hamilton-Wentworth Detention Centre after being arrested Saturday for what police say was a parole violation that relates to Hopperton's conviction for participating in a Locke Street vandalism spree. A condition of sentencing was to not be at protests that disturb the peace. 17 Lies We Need to Stop Teaching Girls About Sex. Originally published on Mic and cross-posted here with their permission. 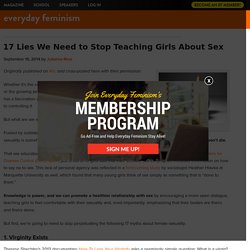 Whether it’s the constant fretting over Miley Cyrus‘ influence on school girls or the growing (and troubling) tradition of Purity Balls, it’s clear that society has a fascination with young women’s sexuality — especially when it comes to controlling it. But what are we actually teaching today’s girls about sex? Fueled by outdated ideals of gender roles and the sense that female sexuality is somehow shameful, there seem to be certain pernicious myths about girls and sex that just won’t die. Bash Back! proves queer insurrections didn’t stop with Stonewall. What An LGBTQ-Inclusive Sex Education Would Have Taught You. Mini Mia and her Darling Uncle: Pija Lindenbaum, Elisabeth Kallick Dyssegaard: 9789129667349: Amazon.com: Books.

InterACT Advocates for Intersex Youth. The Science of Being Transgender by Science Vs from Gimlet Media. How to listen: Subscribe (it’s free!) 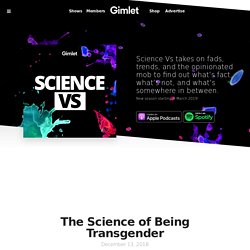 In your favorite podcast app. Show Notes Recently we’ve been hearing a lot about transgender identity. That made us wonder… what makes us the gender that we are? These 16 Great Videos Remind Us What It Meant To Be LGBTQ In 2016. Librarians Recommend 10 Books That Deal With Gender Identity Or Sexuality. We asked a few librarian experts from across Canada to tell us their favourite books for kids aged eight to 13 that touch on, or explore directly, themes of personal identity related to gender or sexuality. His first protest ever cost him his career, reputation and sense of self. When Adam Smith got in his car, drove up to a Chick-fil-A drive through window and began confronting an employee about LGBT rights, he thought he was doing something positive.

For him, it was one step in undoing anti-gay messaging he says he was taught as a child. But his first act of protest ever would soon cause his life to unravel. Smith filmed the 2012 encounter in Tucson, Arizona as part of a larger demonstration against the fast food chain. Its chairman, president and CEO Dan T. #HearOurStory. Every Class in Every School - The first national climate survey on homophobia, biphobia, and transphobia in Canadian schools Final Report – Summary of Results May 2011 (Download PDF 24 pages) Download Full Final Report (152 pages) Français This report discusses the results of a national survey of Canadian high school students undertaken in order to investigate what life at school is like for students with sexual or gender minority status.1 Our study sought to identify the forms and extent of students’ experiences of homophobic and transphobic incidents at school, the impact of those experiences, and the efficacy of measures being taken by schools to combat these common forms of bullying.

The study involved surveying over 3700 students from across Canada between December 2007 and June 2009 through two methods. Almost 10% of LGBTQ students reported having heard homophobic comments from teachers daily or weekly (17% of trans students; 10% of female sexual minority students; and 8% of male sexual minority students). 'Ask Me': What LGBTQ Students Want Their Professors to Know. How can schools support LGBTQ2 students? 10 Canadian LGBTQ stories that need to be made into films or TV series. Queeries is a weekly column by CBC Arts producer Peter Knegt that queries LGBTQ art, culture and/or identity through a personal lens. In under 24 hours, over a million viewers watched the first LGBTQ Heritage Minute when it first debuted last week.

It was a record for the 27-year-old mini-doc series, which made its inaugural dip into the rich history of queer Canadiana via the story of Jim Egan, our country's first publicly known gay activist. This got me thinking: with interest clearly high with respect to this history, why stop there? And while Heritage Minutes are a fabulous start, why not expand these stories into full-length film and/or television? Telling the stories of actual people and events in Canadian LGBTQ history on any sort of screen hasn't exactly been a regular occurrence.

BCTF > LGBTQ Video Resources. The videos listed below are available to borrow from the BCTF Information Services Department. Apples and Oranges (16 min) (Grades 3-5) c2003 During class discussions, children’s paintings magically dissolve into two short animated stories. In one, a girl finds out that creativity, not revenge, is the best way to deal with a school bully.

In the second, two friends skateboard together, until one finds out the other is gay. Stereotyping, name-calling, intolerance, and bullying are all included.Dangerous Living: Coming Out in the Developing World: By sharing the personal stories coming out of developing nations, this film sheds light on an emerging global movement striving to end discrimination and violence against gay, lesbian, bisexual and transgendered people. From Criminality to Equality: 40 years of lesbian and gay movement history in Canada from 1969 to 2009. It Gets Better Canada. It Gets Better Canada. Best LGBT Short Films. Many Ways to Be a Girl, but One Way to Be a Boy: The New Gender Rules. Sask. advocates call on province to ban 'conversion therapy' for LGBT people. These 16 Great Videos Remind Us What It Meant To Be LGBTQ In 2016. University of Regina Library Authentication. To verify that you are a current University of Regina user, use one of the two methods below.

If you are unable to log in, please contact the Library Systems Dept. at 306-585-4015 or the IT Support Centre at 306-585-4685 or email IT.Support@uregina.ca. Distance Education students, please log in with your uregina.ca username and password. If you don't know your username and password, please click here to find them. If you require further assistance, please call the UREAD office at 1-800-667-6014. University of Regina Library Authentication. To verify that you are a current University of Regina user, use one of the two methods below. Why Women Proposing Is Still Rare. BET, LA CHAÎNE CULTURE NOIRE-AMERICAINE 100% DIVERTISSEMENT. Love in the Age of Digital Reproduction. The XY Games: What ‘Gender Testing’ Reveals About the Olympics, and Ourselves.

Ontario minor hockey players to get talks on gender diversity, expression. Before they polish their power plays and develop their defensive strategies, minor hockey players in Ontario will be getting a pre-season chat about gender identity and gender expression next month. India’s top court legalizes gay sex in landmark ruling. Why the surge in gender dysphoria among teenage girls?