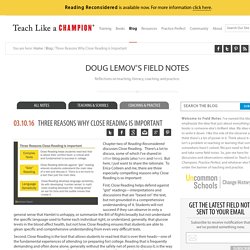 There’s a lot to discuss, some of which I’ve shared in other blog posts (also here and here). But here, I just want to share the rationale. To Erica Colleen and me, there are three especially compelling reasons why Close Reading is so important: First, Close Reading helps defend against “gist” readings—interpretations and discussions that are “based on” the text, but not grounded in a comprehensive understanding of it.

Students will not succeed if they can observe in only a general sense that Hamlet is unhappy, or summarize the Bill of Rights broadly but not understand the specific language used to frame each individual right, or understand, generally, that glucose levels in the blood affect health, but not how. Second, Close Reading is the tool that allows students to read text that is over their heads—one of the fundamental experiences of attending (or preparing for) college. Graphic novels 101. Expanding literacies. News Archive - Comic.de.

Some Great Graphic Novels About Women. Tamara Drewe, by Posy Simmonds, is an off-beat drama about a hot young newspaper columnist who stirs up the affairs of a small community in the British countryside. 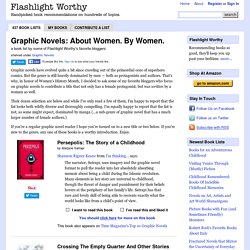 The story takes place over the course of four seasons at a writer's retreat, where the arrival of new neighbor Tamara Drewe and her rock star boyfriend up-ends the relatively ho-hum existence of the couple that owns the farm, their handyman, a writer who farts around in one of the guest houses, and two of the local high school girls. Everyone is captivated by Tamara, who isn't all that inclined to run away from their attentions. 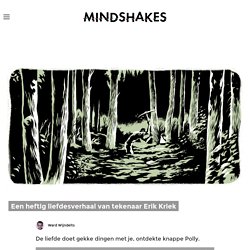 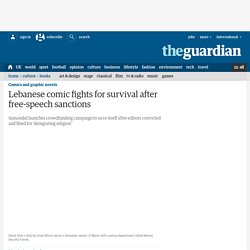 The event marked Samandal magazine’s attempt to crowdfund its way out of oblivion after three of its editors were convicted of crimes against religion and fined for their work, nearly putting the experimental comics collective out of business. For five years, editors of the Beirut-based magazine kept fairly quiet about their legal troubles. In 2010, editors Omar Khouri, Hatem Imam, and Fadi Baki were charged with “inciting sectarian strife”, “denigrating religion”, “publishing false news” and “defamation and slander” for two comics that appeared in the seventh issue of Samandal. “Our lawyer said that this was an absurd case and we’d definitely win it in court,” Baki told the Guardian by email. “He wasn’t too excited about having the media publicising it because he didn’t want it to affect what he thought would be an easy decision for the judges.” Corruption, War, and Long-Lost Diaries: Recent Translations of Graphic Novels. A Game for Swallows Zeina Abirached, tr. 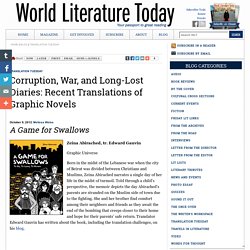 Praktijkonderzoek. Programma Detail. Comics Help Bridge The Learning Gap Between Boys And Girls. According to a recent study, access to comic books in the classroom can help bridge the literacy gap between boys and girls. 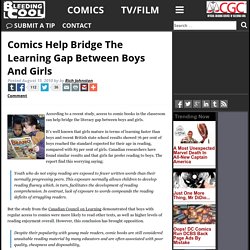 It’s well known that girls mature in terms of learning faster than boys and recent British state school results showed 76 per cent of boys reached the standard expected for their age in reading, compared with 85 per cent of girls. Canadian researchers have found similar results and that girls far prefer reading to boys. The report find this worrying saying; Youth who do not enjoy reading are exposed to fewer written words than their normally progressing peers. This exposure normally allows children to develop reading fluency which, in turn, facilitates the development of reading comprehension.

But the study from the Canadian Council on Learning demonstrated that boys with regular access to comics were more likely to read other texts, as well as higher levels of reading enjoyment overall. The report chooses to dimiss what it sees as myths bout comics; Advancing comics as art since 1996. When the Present Makes Contact with the Past: Comic Adaptations and Translations of Medieval and Early Modern Sources. In past papers at the Plymouth State University Medieval & Renaissance Forum, I have advocated for the use of comics in the classroom in spite of the fact that this is a relatively modern and contemporary genre as opposed to the field of literature which many members of the audience teach to their students. 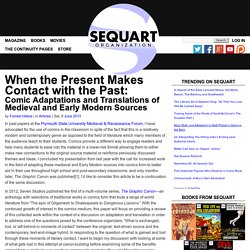 Comics provide a different way to engage readers and help many students to ease into the material in a lower-risk format allowing them to either make new connections to the original source material or reinforce previously discussed themes and ideas. I concluded my presentation from last year with the call for increased work in the field of adapting these medieval and Early Modern sources into comics form to better aid in their use throughout high school and post-secondary classrooms, and only months later, The Graphic Canon was published[1]. I’d like to consider this article to be a continuation of the same discussion. But fear not! There is also some really good stuff ahead. Comic-book heroes deserve better than a trashing. When pop culture icons burst from the underground, critical commentators tend to cocoon themselves in snobbery or flail around trying to understand their significance. 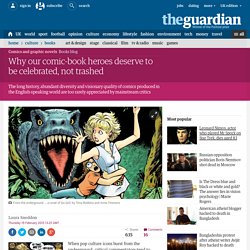 This week, the Guardian art critic Jonathan Jones joined in with a blogpost titled: “When did the comic-book universe become so banal?” Jones cited 71-year-old Robert Crumb as the standard of true art in comics. Generations have flourished since Crumb reached his peak, but to understand the resigned disappointment with which such rants are received by comic fans and scholars of the artform, we need to look further back into history. From the 19th century onwards, comics bloomed across Europe, with groundbreaking works from Rodolphe Töpffer, Gustave Doré, Wilhelm Busch, and Caran d’Ache.

The blockbuster character of his time, Charles H Ross and Émilie de Tessier’s Ally Sloper, began life in the UK in the 1860s. Earlier this month, the 110th anniversary of Pinchon’s Bécassine was celebrated in France with a Google doodle. Comics studies has been undervalued for too long: we're fighting to change this. The academic discipline of comics studies has burgeoned in recent years. 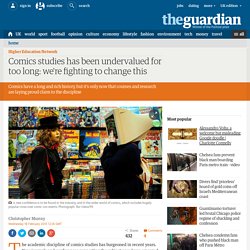 New journals and conferences supporting the subject area have emerged, a comics laureate has been appointed and the UK’s first ever master’s programme for the discipline has been established. This is the culmination of many decades of work in comics scholarship. Many will know that the study and appreciation of comics has a long history – early appreciators of the medium include Goethe, Picasso, and Bunuel.

But it is only now that this is being translated into courses and research that do not disguise themselves as something else, but rather lay proud claim to comics studies as a discipline. Goethe.de/Comics: German-language comics - Graphic Novel - Goethe-Institut  Since the nineties a new term has come into circulation: auteur comics, taking their name directly from the analogy of film: for example, if a film director also writes the screenplay and makes most of the artistic decisions, then these films are generally known as 'auteur movies'. 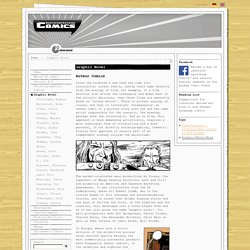 There is another analogy of course, and that is literature. Consequently: an auteur comic is a picture story with one and the same artist responsible for the scenario, the drawing, perhaps even the colouring-in. And as in film, this approach is more demanding artistically, requires a more individual form of storytelling and a more personal, if not directly autobiographical, thematic. More Powerful than a Locomotive: Using Graphic Novels to Motivate Struggling Male Adolescent Readers. By Karen Gavigan Abstract Although the popularity of graphic novels is growing by leaps and bounds, there is currently little empirical research documenting their use with struggling male adolescent readers. The purpose of this article is to present the results of a study that examined the ways in which four struggling eighth-grade male readers responded to graphic novels during a graphic novel book club.

During the twelve book club sessions, the students read self-selected graphic novels and discussed them with their peers. Bryan Talbot: an interview with the father of the British graphic novel. Choosing an animal sometimes takes a while, says graphic novelist Bryan Talbot, sitting in the crepuscular basement of his Sunderland home. Casting a badger as the steampunk detective in a world where Britain is a former colony of France was straightforward compared with other figures in his anthropomorphic Grandville series. “I wanted a tenacious character who would battle against all odds, and badgers are tenacious. They also look cool – it’s to do with the black-and-white stripes,” he says of his hero, Archie LeBrock, a remarkably ripped detective inspector who dresses like Sherlock Holmes and fights like a Tarantino villain.

Indeed, the production of comics in book form and the subsequent exploitation of the freedoms associated with the book market saw the emergence of a wealth of material, such as Jimmy Corrigan, the Smartest Kid on Earth (2000) by Chris Ware, Persepolis (2000) by Marjane Satrapi, From Hell (1991–98) and Lost Girls (1991–2006) by Alan Moore, with artwork by Eddie Campbell and Melinda Gebbie, respectively, and Y: The Last Man (2002–08) and Pride of Baghdad (2006) by Brian K. Vaughan, with artwork by Pia Guerra and Niko Henrichon, respectively. These comics, along with a host of other artful and literate publications, have gained recognition and awards well beyond the sometimes insular world of comic fandom. Search. Books to Get Kids Reading. Research has shown that reading contributes to vocabulary development.

Our knowledge of vocabulary directly affects our ability to understand what we read. It has also been demonstrated that the more one reads, the better reader one becomes. Therefore, it is very important that we encourage children to read as much as possible. So, how do we get children who are dyslexic to read? It’s a good question. One way that has proven successful is to have children and teens read in areas of interest. Graphic Novels in the Classroom. Graphic Novels Welcome Everyone Into the Reading Conversation By Kyle Redford, YCDC Education Editor Every teacher and librarian has witnessed the universal appeal of the graphic novel. The best graphic novels of 2014. Lezen voor de Lijst. Vooraf. 2012 Teachers' Conference: 'Getting to Grips with Graphic Novels' by Samantha Lewis. YouTube - Broadcast Yourself. 03920Chap01_x. Graphic Canon Volume 1 Excerpt by Veronica Liu. The Graphic Canon, Volume 2 by Veronica Liu.

While there's still resistance to this medium being used in education - whether by staff or students - there is also a growing movement to use every valuable tool available. Comics have some great uses in the classroom and in a variety of curricula. From pre-readers to high school students, from English to ESL to Science and Math, comics can help students analyze, synthesize and absorb content that may be more difficult when presented in only one way. Why Comics in the Classroom? For the pre-reader, a comic can be purely graphical in nature and help provide practice with sequencing as well as concrete to abstract transitions using illustrations instead of written words. Comics also have the ability to meet the needs of students in a variety of learning styles. Graphic Novel - Peter Pontiac. Peter van Dongen - boeken.