Untitled. US President Donald Trump speaks as he departs the White House in Washington, DC, on July 29, 2020 en route to Texas. 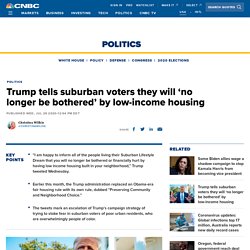 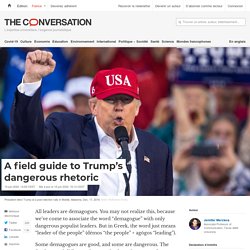 Trump is quietly gutting the asylum system amid the pandemic. Trump's Disdain for Puerto Rico Should Be His Undoing. Puerto Rico’s death toll of about 3,000 from Hurricanes Irma and Maria in 2017 ought to be the biggest strike against President Donald Trump.

The majority of deaths on the island occurred in the days and weeks following the hurricanes, largely due to inadequate health care and the admitted failures of the Federal Emergency Management Authority (FEMA), suggesting that these were preventable deaths. And yet to Trump, Puerto Rico is the recipient of fantastical amounts of undeserved money. 'A nightmare': flight attendant with Daca status held after flying for work. Islamophobia is not confined to online groups. It leaks across public life. On Friday morning, as the news from Christchurch was still rolling across radio bulletins, Sir Mark Rowley, the former head of counter-terrorism at the Met, was commenting on the horror on BBC Radio 4’s Today programme. 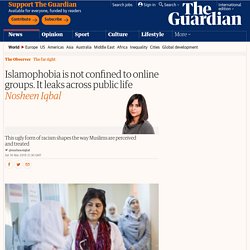 Fifty Muslims had been brutally murdered, and 48 seriously injured. For 17 horrifying minutes, a white supremacist terrorist unloaded round after round of bullets into men, women and children. Islamophobia was undoubtedly real and on the rise and being propagated online, said Rowley. The Heroes of America's Startup Economy Weren't Born in America. According to the Entrepreneurship Rate indicator of the Inc. 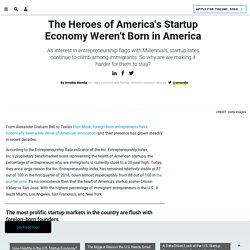 Entrepreneurship Index, Inc.'s proprietary benchmarked score representing the health of American startups, the percentage of entrepreneurs who are immigrants is currently close to a 20-year high. Rep. Tom McClintock distorts number of homicides by undocumented immigrants. Lise Meitner – the forgotten woman of nuclear physics who deserved a Nobel Prize. Nuclear fission – the physical process by which very large atoms like uranium split into pairs of smaller atoms – is what makes nuclear bombs and nuclear power plants possible. 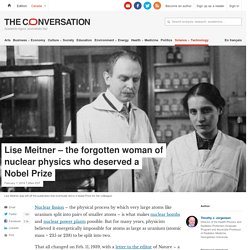 But for many years, physicists believed it energetically impossible for atoms as large as uranium (atomic mass = 235 or 238) to be split into two. That all changed on Feb. 11, 1939, with a letter to the editor of Nature – a premier international scientific journal – that described exactly how such a thing could occur and even named it fission. 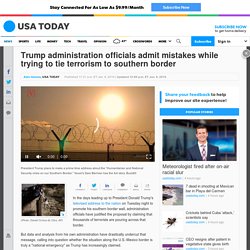 Veuer's Sam Berman has the full story. Buzz60 In the days leading up to President Donald Trump's televised address to the nation on Tuesday night to promote his southern border wall, administration officials have justified the proposal by claiming that thousands of terrorists are pouring across that border. But data and analysis from his own administration have drastically undercut that message, calling into question whether the situation along the U.S. -Mexico border is truly a "national emergency" as Trump has increasingly claimed.

White House press secretary Sarah Sanders said on Friday that Customs and Border Protection officials caught nearly 4,000 known or suspected terrorists "that came across our southern border. " Former Blackwater guard convicted of instigating mass shooting in Iraq. WASHINGTON – A former Blackwater Worldwide security guard has been convicted a second time on a charge that he instigated a mass shooting in Iraq more than a decade ago. 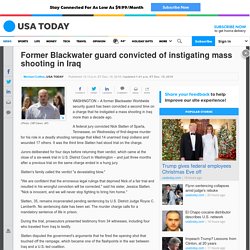 A federal jury convicted Nick Slatten of Sparta, Tennessee, on Wednesday of first-degree murder for his role in a deadly shooting rampage that killed 14 unarmed Iraqi civilians and wounded 17 others. It was the third time Slatten had stood trial on the charge. Jurors deliberated for four days before returning their verdict, which came at the close of a six-week trial in U.S. District Court in Washington – and just three months after a previous trial on the same charge ended in a hung jury. 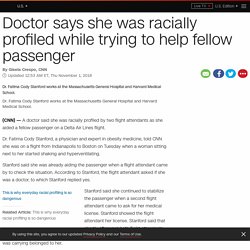 Fatima Cody Stanford, a physician and expert in obesity medicine, told CNN she was on a flight from Indianapolis to Boston on Tuesday when a woman sitting next to her started shaking and hyperventilating. Stanford said she was already aiding the passenger when a flight attendant came by to check the situation. According to Stanford, the flight attendant asked if she was a doctor, to which Stanford replied yes. Stanford said she continued to stabilize the passenger when a second flight attendant came to ask for her medical license.

Stanford showed the flight attendant her license. 'It's not fair, not right': how America treats its black farmers. On the summer day in 2014 that June Provost found three stray cats dead and lined up side by side in his tractor, the forecast had called for rain. 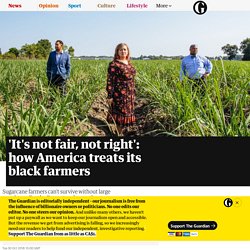 How Trump-Fed Conspiracy Theories About Migrant Caravan Intersect With Deadly Hatred. You Don’t Need to Go to the Dark Web to Find Hateful Conspiracy Theories. How Vilification of George Soros Moved From the Fringes to the Mainstream. Trump's Caravan Hysteria Sparked a Massacre. Latinos and the Consequences of Eugenics. By Natalie Lira In February 1930, Concepcion Ruiz, a 16-year-old Mexican-American, was arrested and tried in California Juvenile Court on charges of sexual delinquency. Legal officers brought the young woman before Superior Court Judge Robert H.

Scott because she ran away with a boyfriend and was allegedly “subnormal.” Viral flag-burning photos are not from the migrant caravan in Mexico. Are Central American refugees hoping to relocate to the United States desecrating the stars and stripes as they head north? Trump Stump Speeches: Immigration. Editor’s Note: For weeks, President Donald Trump has been campaigning in states that are key to the Republican Party’s chances of maintaining control of the House and Senate.

Republican voter suppression. Dunkin' employee calls police on student speaking Somali with her family. Get breaking news alerts and special reports. Florida GOP gubernatorial nominee was admin of racist Facebook group. Theresa Klein, aka Cornerstore Caroline, Apologizes for Falsely Accusing Boy of Sexual Assault. No evidence that Andrew Gillum is running from FBI. A Republican ad portrays Tallahassee Mayor Andrew Gillum as a man on the run from law enforcement amid an FBI corruption probe in his city. Cop who fatally shot Tamir Rice hired by Ohio police department. The police officer who fatally gunned down 12-year-old Tamir Rice in Cleveland four years ago has been hired by another police department in rural Ohio. Yahoo fait dÃ©sormais partie dâOath. A year ago almost to the day, Vice President Mike Pence arrived at an Indianapolis Colts game against the San Francisco 49ers, ostensibly to watch the Colts honor former franchise QB Peyton Manning. But when several members of the 49ers knelt during the national anthem, Pence, his wife, and his security team walked out.

The move drew praise from the president. As a black nurse, I see the crushing racial inequality across the NHS. This has to stop. May, the enforcer, continues to blame Windrush victims for their fate. Not all political scandals are bad. Slate’s Use of Your Data. Georgia’s Separate and Unequal Special-Education System. Unroll.Me and GDPR. NPR Choice page. Effects Of Racism & Discrimination On Children Health. Children as young as 10 denied UK citizenship for failing ‘good character’ test. Hurricane Maria: Trump's FEMA chief partially blames Puerto Rico deaths on 'spousal abuse'