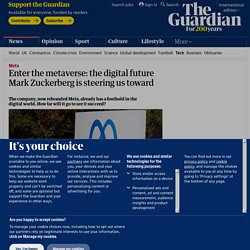 In a presentation at the company’s annual Connect conference, Zuckerberg announced the company is rebranding as Meta and detailed how his company aims to build a new version of the internet. In the middle of a crisis, Facebook Inc. renames itself Meta. OAKLAND, Calif. 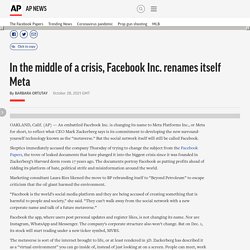 (AP) — An embattled Facebook Inc. is changing its name to Meta Platforms Inc., or Meta for short, to reflect what CEO Mark Zuckerberg says is its commitment to developing the new surround-yourself technology known as the “metaverse.” But the social network itself will still be called Facebook. Skeptics immediately accused the company Thursday of trying to change the subject from the Facebook Papers, the trove of leaked documents that have plunged it into the biggest crisis since it was founded in Zuckerberg’s Harvard dorm room 17 years ago. The documents portray Facebook as putting profits ahead of ridding its platform of hate, political strife and misinformation around the world.

Marketing consultant Laura Ries likened the move to BP rebranding itself to “Beyond Petroleum” to escape criticism that the oil giant harmed the environment. Facebook the app, where users post personal updates and register likes, is not changing its name. Facebook to hire 10,000 in EU to work on metaverse. Apparently, it's the next big thing. What is the metaverse? The great social media misinformation quiz. As social media platforms have become more intertwined with our lives, so too has the misinformation that comes with them. 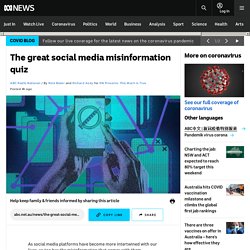 But most Australians can sort the real from the fake content that's shared on social media, right? Let's find out. We've collated several recent news items and concocted some phony material too, all presented in a shiny new social media feed. Can you separate the fact from the fiction? Here's why Facebook, Instagram, Messenger and WhatsApp went down. The outage that took down Facebook, Instagram and WhatsApp for about six hours, affecting billions of people around the world, may have been due to a tiny human error. 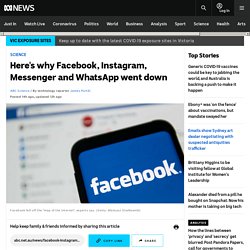 Key points: The Facebook outage has been traced to the "navigation system" of the internet, known as BGPA minor update to BGP navigation directions appears to have been misconfiguredAs a result, the company's network fell off "the map of the internet" Facebook, WhatsApp, Instagram suffer global outage. Facebook and its Instagram and WhatsApp platforms have been hit by major global outages. 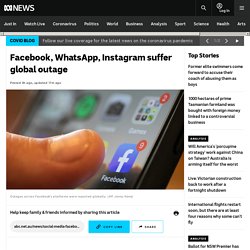 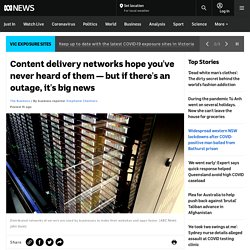 But that's exactly what content delivery network (CDN) providers would like. "If most people don't know that we're there, then we're delivering a great quality of service," Raymond Maisano, the local head of Cloudflare, a CDN and cyber security provider, tells The Business.. Every minute, Australians are accessing websites and apps operated across the world, without a second thought. CDNs are one part of the system allowing that to happen. Online groups taking the dread out of making new friends for those with social anxiety. Young Sunshine Coast woman Leigha Farnsworth usually faces social situations with dread. 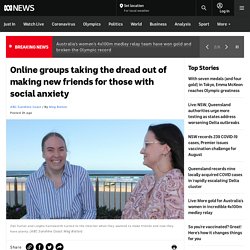 Key points: The dark side of TikTok's algorithm. Apple founder Steve Wozniak backs right-to-repair movement. Facebook or YouTube? What does your favourite social media site say about you? Depending on who you ask, the sprawling and loquacious networks we loosely term "social media" are either a life-changing resource for like-minded people to find each other, or a time-sapping sewer of anonymous abuse and shallow clicktivism. 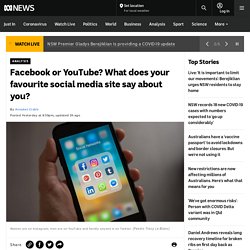 It's easy to use these platforms to survey their users; what's harder is working out from a population-wide perspective just how influential each platform is, or what differentiates devotees of one from those of another. Step forward, Australia Talks! Commonwealth Bank, ANZ, Westpac, RBA and others hit by internet outage, finger pointed at network provider Akamai. Online services are being restored following a widespread outage that affected ANZ, Westpac and the Commonwealth Bank, as well as other businesses such as Virgin Australia and Australia Post. 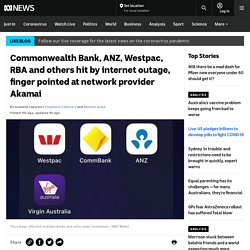 Key points: Network and cybersecurity firm Akamai is understood to be the source of the widespread outageServices started to come back online late Thursday afternoonEarlier this month, an outage at another firm, Fastly, took major media sites offline On Thursday afternoon, customers took to social media to report troubles accessing bank services online or through banking apps. NAB was the only one of the big four banks not to experience any disruption, along with many of the smaller banks and credit unions.

However, the problems went far deeper, with staff at some of the major banks unable to access the internet and the Reserve Bank's website and other systems also down for a period of time. G7: 'Mount Recyclemore' of leaders made from electronic waste in Cornwall. Fastly internet chaos highlights just how vulnerable websites are. While these setups usually work perfectly, their complexity means that even a simple error in a configuration file can trigger chain reactions of outages. 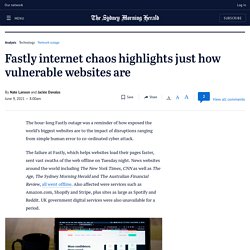 For users, most of whom rarely need to think about how the internet works, that can come as a shock. “People believe that somehow things don’t break. At the end of the day it’s a computer sitting in a server room with different components that can malfunction,” said Mehdi Daoudi, co-founder and chief executive officer of Catchpoint, a technology platform that monitors website performance.

Liu Xiaoming, who recently stepped down as China’s ambassador to the United Kingdom, is one of the party’s most successful foot soldiers on this evolving online battlefield. He joined Twitter in October 2019, as scores of Chinese diplomats surged onto Twitter and Facebook, which are both banned in China. TikTok: How Israeli-Palestinian conflict plays out on social media. Digital apartheid: Palestinians being silenced on social media. In 1984, Palestinian American intellectual and Columbia University Professor Edward Said famously argued that Palestinians are denied “permission to narrate”. More than 30 years later, in 2020, Maha Nassar, a Palestinian American Associate Professor at the University of Arizona, analysed opinion articles published in two daily newspapers – The New York Times and The Washington Post – and two weekly news magazines – The New Republic and The Nation – over a 50-year period, from 1970 to 2019.

Perhaps unsurprisingly, she found that “Editorial boards and columnists seem to have been quite consumed with talking about the Palestinians, often in condescending and even racist ways – yet they somehow did not feel the need to hear much from Palestinians themselves.” Bitcoin dips below $50,000 as Musk calls energy usage ‘insane’

By Yakob Peterseil and Vildana HajricBloomberg Tesla Inc.’s Chief Executive Officer Elon Musk doubled down on his attack on Bitcoin’s energy demands, calling recent consumption trends “insane.” Fuel shortage in US enters sixth day with long queues, fistfights and rising tensions. Fistfights and long queues have been reported at petrol stations in the south-eastern United States as people panic over a fuel shortage sparked by a cyber attack last week. Key points: Play the game to see how video games are designed to get you hooked and spending. Calls for some telehealth services to become permanent after millions use virtual service during COVID pandemic.

Anthony Seibold provides dossier of online abuse to NRL Integrity Unit, with cyberbullying legislation on the way - ABC News. Are K-pop and BTS fans a new force for social justice? Amid Black Lives Matter protests in the United States, K-pop fans are being hailed as a new force in politics and social justice. In recent weeks, they flooded a Dallas police intelligence app trying to collect "illegal activity from the protests" with fancams - video clips of K-pop performers - until it crashed. Armed with K-pop clips, they have spammed similar police surveillance requests on Twitter, a birthday card for President Trump, and taken over racist hashtags like #WhiteLivesMatter and #itsokaytoberacist. $10bn of precious metals dumped each year in electronic waste, says UN. At least $10bn (£7.9bn) worth of gold, platinum and other precious metals are dumped every year in the growing mountain of electronic waste that is polluting the planet, according to a new UN report.

Hate-hacking and Zoom 'bombing': Racism in the virtual workspace. Since the World Health Organization (WHO) announced a global pandemic in March, the world has transitioned into a virtual society. Employee monitoring software surges as companies send staff home - ABC News. eSafety Commissioner. What is Big Data and Why is it Important?

Social Media Monitoring Tools. Julian Assange: 'This generation is the last free generation' My phone is spying on me, so I decided to spy on it. 'Our minds can be hijacked': the tech insiders who fear a smartphone dystopia. Digital Attack Map. The Misinformation Medic - Diagnosing social media's Misinformation Pandemic.

Digital Health Supports The Fight Against Opioids. Home. Tech giants struggle to stem 'infodemic' of false coronavirus claims. Apple and Google team up in bid to use smartphones to track coronavirus spread. In the town camps of Alice, coronavirus is raising the stakes of the digital divide. At least 20 UK phone masts vandalised over false 5G coronavirus claims.

: Scientists brand 5G claims 'complete rubbish' Gove warns 5G-coronavirus conspiracy theory is 'dangerous nonsense' Facebook is still far too powerful. It's also how millions are coping with this crisis. How to focus when your mobile phone is distracting you from reading or writing. An interactive web-based dashboard to track COVID-19 in real time. Slow Internet? How Covid-19 is Stressing Internet Infrastructure in Your Country. Digital mental health project wins industry grant for new trial - The University of Sydney.

Chinese companies using GPS tracking device smartwatches to monitor, alert street cleaners. Chart of the day: How we are spending our internet minutes. What does Unilever do with AI at 27 of its data centers worldwide? A Mass Murder of, and for, the Internet. 15 years of Facebook: has it made the world, and Australia, a better place? No more WhatsApp? How the proposed encrypted message access laws will affect you - Politics.

Why we are governed by idiots and you should be worried. Perpetrators using drones to stalk victims in new age of technology fuelled harassment. Mental health of children and young people ‘at risk in digital age’ The inconvenient truth about cancer and mobile phones. Googling the Anthropocene – Screenworks. Facebook admits it made some private posts public for up to 14 million users. Urban Mind: Using Smartphone Technologies to Investigate the Impact of Nature on Mental Well-Being in Real Time. Dirty streaming: The internet's big secret. AURIN. Australian Urban Research Infrastructure Network. The Dark Side of the Digital Age: E-Waste

E-Waste Hell. Why you shouldn't buy a new iPhone when the new model is unveiled. Demand for rare-earth metals is skyrocketing, so we're creating a safer, cleaner way to recover them from old phones and laptops. Smartphone ratings. Nowandnext. The problem with e-waste. Sustainable shopping. I.stuff.co.