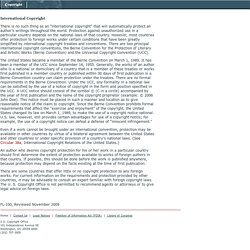 Protection against unauthorized use in a particular country depends on the national laws of that country. However, most countries offer protection to foreign works under certain conditions that have been greatly simplified by international copyright treaties and conventions. Circ38a. S Use of Your Data. Slate’s Use of Your Data. Why Your Favorite Video Just Disappeared From YouTube. YouTube is the most popular video platform in the world, but that doesn’t make it exempt from intellectual property laws. 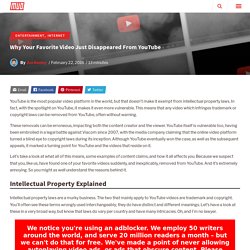 In fact, with the spotlight on YouTube, it makes it even more vulnerable. This means that any video which infringes trademark or copyright laws can be removed from YouTube, often without warning. These removals can be erroneous, impacting both the content creator and the viewer. YouTube itself is vulnerable too, having been embroiled in a legal battle against Viacom since 2007, with the media company claiming that the online video platform turned a blind eye to copyright laws during its inception. Although YouTube eventually won the case, as well as the subsequent appeals, it marked a turning point for YouTube and the videos that reside on it. Let’s take a look at what all of this means, some examples of content claims, and how it all affects you. Intellectual property laws are a murky business. A trademark distinguishes your brand from a competitor. The Fine Bros. Copyrights and Wrongs (9-12) Digital Millennium Copyright Act. The Digital Millennium Copyright Act (DMCA) is a 1998 United States copyright law that implements two 1996 treaties of the World Intellectual Property Organization (WIPO). 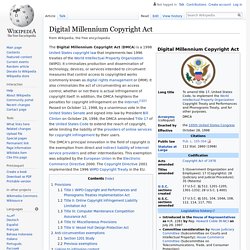 It criminalizes production and dissemination of technology, devices, or services intended to circumvent measures that control access to copyrighted works (commonly known as digital rights management or DRM). It also criminalizes the act of circumventing an access control, whether or not there is actual infringement of copyright itself. In addition, the DMCA heightens the penalties for copyright infringement on the Internet.[1][2] Passed on October 12, 1998, by a unanimous vote in the United States Senate and signed into law by President Bill Clinton on October 28, 1998, the DMCA amended Title 17 of the United States Code to extend the reach of copyright, while limiting the liability of the providers of online services for copyright infringement by their users.

Teaching Students to Avoid Plagiarism. Lines on Plagiarism Blur for Students in the Digital Age. Why do students cheat? Listen to this dean's words. Editor’s note: Since the publication of this article, the University of Florida terminated Chris Loschiavo’s employment when it learned he used his UF work computer account to purchase pornography. 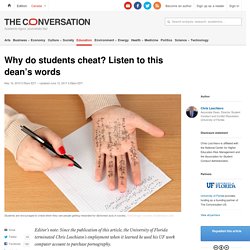 Cheating in college has been with us since the inception of higher education. In recent months, cases of cheating, including large-scale cheating at elite colleges, have led to considerable turmoil. Many of these behaviors could well start to take shape right at the level of high school. A survey conducted by renowned academic integrity researcher Don McCabe shows how widespread the problem is in high schools. Plagiarism. Copyright. Copyright Advisory Network - Copyright Advisory Network. COLLECTION: Copyright, Fair Use, and Plagiarism. Artist comes up with sweet idea after discovering that an ice cream company plagiarized his work. People Have a Lot of Feelings About Melania Trump’s New Cyberbullying Initiative. First Lady Melania Trump has finally unveiled her formal plan with a new slogan: “Be Best.” 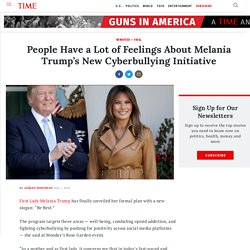 The program targets three areas — well-being, combating opioid addiction, and fighting cyberbullying by pushing for positivity across social media platforms — she said at Monday’s Rose Garden event. “As a mother and as first lady, it concerns me that in today’s fast-paced and ever-connected world, children can be less prepared to express or manage their emotions and oftentimes turn to forms of destructive or addictive behavior such as bullying, drug addiction or even suicide,” she said. The plan was ambitious, but some observers online felt it wasn’t entirely hers. For one thing, the slogan “Be Best,” sounded a little too much like Michelle Obama’s “Be Better” answer to Oprah Winfrey’s question at the White House Summit on the United State of Women in 2016. That wasn’t the only aspect of the comprehensive plan that critics felt they’d seen before. The White House has yet to respond to criticism.

Haruko Obokata. Haruko Obokata (小保方 晴子, Obokata Haruko, born 1983) is a former stem-cell biologist and research unit leader at Japan's Laboratory for Cellular Reprogramming, Riken Center for Developmental Biology.[3][4] She claimed to have developed a radical and remarkably easy way to make stimulus-triggered acquisition of pluripotency (STAP) cells that could be grown into tissue for use anywhere in the body.[5] Riken, however, eventually launched an investigation in response to allegations of irregularities in images appearing in several articles she authored, including the paper announcing the discovery of STAP cells.[6][7][8] The ensuing scandal over STAP cells has since become one of the world's best-known scientific frauds alongside the Schön scandal and Hwang Woo-suk's cloning experiments.[9][10][11][12][13] Early life and education[edit] Obokata was born in Matsudo, Chiba, Japan, in 1983. 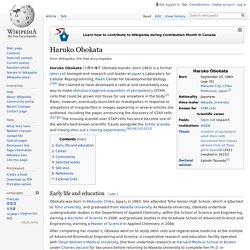 Career[edit] Controversy[edit] Obokata announced her resignation from Riken in December 2014.[30][31] Caught red-handed: IB boss plagiarising. The growing menace of plagiarism has become one of the biggest problems facing exam boards today, prompting strict warnings of the consequences for candidates who cheat. 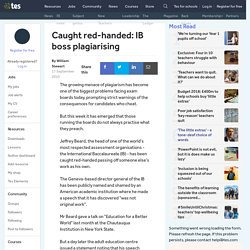 But this week it has emerged that those running the boards do not always practise what they preach.