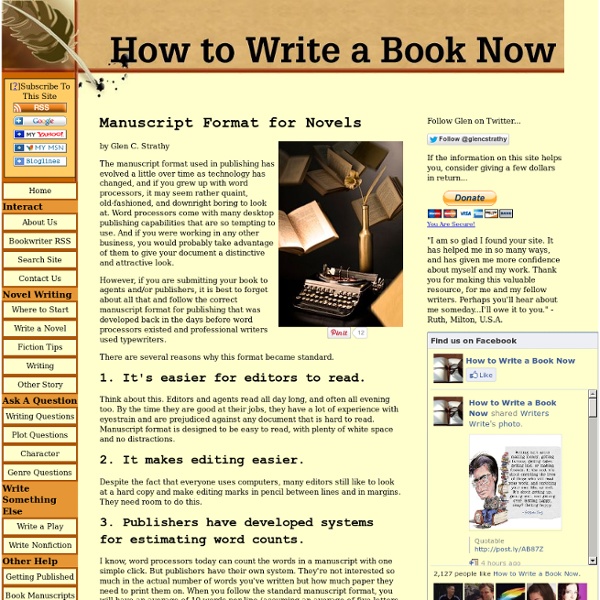 by Glen C. Strathy The manuscript format used in publishing has evolved a little over time as technology has changed, and if you grew up with word processors, it may seem rather quaint, old-fashioned, and downright boring to look at. Word processors come with many desktop publishing capabilities that are so tempting to use. And if you were working in any other business, you would probably take advantage of them to give your document a distinctive and attractive look. However, if you are submitting your book to agents and/or publishers, it is best to forget about all that and follow the correct manuscript format for publishing that was developed back in the days before word processors existed and professional writers used typewriters. There are several reasons why this format became standard. 1. Think about this. 2. Despite the fact that everyone uses computers, many editors still like to look at a hard copy and make editing marks in pencil between lines and in margins. 3. 4. 5.

Childrens Book Illustrators Agent | Book Illustrators | Beehive Illustration The Art of Character Development As authors, it is our Duty To create lovable, enticing Characters And do horrible, evil things to Them. This guide is designed to help people with writer's block, role-players of all levels, and people who are just interested in psychology and philosophy as it applies to fiction. Here you'll find tips, examples, suggestions, general information to aid in creating rounded fictional characters for your stories and/or RPGs, and perhaps even information useful for everyday life. There are many aspects of character development, and your character could be nearly as deep and complete as anyone you might know in real life. However, there are basic keys to fleshing out a character that can help break through blocks and get you and your creation on their way to a great story. ♦ Being informed is a vital part of all storytelling. ♦ Learn the importance of Point of View and Background. ♦ Motivation and Alignment: "Good" VS "Evil", what drives your character. The characters come before the story.

Ani - Ghost City of 1001 Churches Ani – some call it the City of 1001 Churches, others the City of Forty Gates. Yet no one has called it home for more than three centuries. Abandoned by its once prosperous and powerful inhabitants, it is situated on the Turkish side of a militarised zone between the border of Turkey and Armenia. The city of Ani is no stranger to death, destruction and desertion. It is a ghost city today but once its Armenian inhabitants numbered close to 200 thousand. In its heyday it was a metropolis which rivalled Constantinople, Cairo or Baghdad as a center of culture and enterprise. The city is the victim of a colossal and centuries old struggle for power between various factions in the region. Almost each time a faction rose to power the city was ransacked almost to the point of obliteration. The city was originally Armenian and the territory on which it stands is still disputed between modern day Turkey and Armenia. A pair of quarrelling siblings would start Ani’s protracted but inexorable decline.

back story How to Weave Backstory Into Your Novel Seamlessly Today's guest newsletter is from Karen Dionne, contributor to Writer's Digest. My first science thriller, Freezing Point , opens with the crew of a fishing trawler braving rough seas off the coast of St. John’s, Newfoundland: The wind howled around the solitary trawler like an angry god. Inside the wheelhouse, Ben Maki braced himself as an errant wave hit broadside and the trawler listed heavily to starboard. Who is Ben Maki? Backstory refers to the characters’ history and other story elements that underlie the situation at the start of the book. But as authors, we need to be careful: Backstory by definition takes the story backward. Too Much, Too Soon One of the most common mistakes I note when I’m called upon to offer comments on aspiring authors’ manuscripts is that the author has included too much backstory in the opening pages. Including backstory in the opening pages is the same as saying to the reader, “Wait a minute—hold on.

5 myths about Christopher Columbus Today is Columbus Day, time to buy appliances on sale and contemplate other things that have nothing to do with Christopher Columbus. So much of what we say about Columbus is either wholly untrue or greatly exaggerated. Here are a few of the top offenders. 1. If he did, he was about 2,000 years too late. Columbus, a self-taught man, greatly underestimated the Earth's circumference. The Columbus flat-earth myth perhaps originated with Washington Irving's 1828 biography of Columbus; there's no mention of this before that point. 2. Yes, let's ignore the fact that millions of humans already inhabited this land later to be called the Americas, having discovered it millennia before. What Columbus "discovered" was the Bahamas archipelago and then the island later named Hispaniola, now split into Haiti and the Dominican Republic. So why does the United States celebrate the guy who thought he found a nifty new route to Asia and the lands described by Marco Polo? 3. This is hotly debated. 4. 5.

The Golden Rules for a Good Plot Writing a novel can be a daunting task. Here are some helpful tips to ensure you write a good plot. Is it your dream to become a best-selling author? Plot Rule 1: Create a plot skeleton A plot outline will help you choose a complication and the steps to resolve it. Plot Rule 2: Flesh out your plot Fleshing out your plot with colorful characters and a vivid setting will enhance your novel and grab your readers’ attention. Plot Rule 3: Bring your plot to a powerful resolution Have you used each scene and story event to guide readers to a plot resolution? Plot Rule 4: End your story at a natural stopping place After the climax, wrap up the story as quickly as possible. Plot Rule 5: Make sure your characters resolve conflicts on their own Don't rely on an act of nature or an unknown hero to clean things up at the last minute. A final note on creating a good plot… Creating a good plot isn't as easy as it sounds.

mental_floss Blog & 8 Secessionist Movements in American History We all know about the Confederate states leaving the Union. But that was far from the only secessionist movement in American history. Here are some rebellious regions you won't find in too many history books. 1. The Kingdom of Beaver Island Beaver Island, a small island in Lake Michigan, became the home of Mormon leader James Strang and his followers—called Strangites—in 1848. 2. Concern over a perceived lack of interest from the Michigan state government, the people of the Upper Peninsula (U.P.), affectionately known as "Yoopers," have been trying to secede and form the State of Superior since as far back as 1897. 3. Rough and Ready, California, was a mining town founded in 1849 by the Rough and Ready Company of Wisconsin. But just three months later, as the Fourth of July approached, The Great Republic of Rough and Ready wanted to have a celebration (which seems odd considering they were no longer, technically, Americans). 4. In the early-1980s, the U.S. 5. 6. 7. 8. See also...

How To Structure A Story: The 8 Point Arc By Ali Hale - 3 minute read One of my favourite “how to write” books is Nigel Watts’ Writing A Novel and Getting Published. My battered, torn and heavily-pencil-marked copy is a testament to how useful I’ve found it over the years. Although the cover appears to be on the verge of falling off altogether, I’ve risked opening the book once more to bring you Watts’ very useful “Eight-Point Story Arc” – a fool-proof, fail-safe and time-honoured way to structure a story. (Even if you’re a short story writer or flash fiction writer rather than a novelist, this structure still applies, so don’t be put off by the title of Watts’ book.) The eight points which Watts lists are, in order: StasisTriggerThe questSurpriseCritical choiceClimaxReversalResolution He explains that every classic plot passes through these stages and that he doesn’t tend to use them to plan a story, but instead uses the points during the writing process: So, what do the eight points mean? Stasis Trigger The quest Surprise Climax Reversal

6 Insane Coincidences You Wont Believe Actually Happened America's Freak Luck During the Battle of Midway The Battle of Midway may be remembered as one of the most spectacular naval battles in history and one of the huge turning points in the Pacific theater, but it started out as a pure clusterfuck for the Americans. Despite going into battle with most of Japan's game plan in their pocket thanks to American codebreakers/Bothan spies, the U.S. Navy had little to show for it in the early hours of June 4, 1942. Just about every aircraft that took on the Japanese that day was destroyed, and all without delivering any serious damage. In short, the Battle of Midway started off like the Battle of Endor, only with every fighter in the Rebel Fleet crashing into the Death Star's deflector shield. Where it Gets Weird: There was one squadron of American dive bombers lead by Lieutenant Commander C. His squadron started dropping like flies until, in an act of sheer luck that would make even J.K. Where it Gets Even Weirder: ...when he wasn't busy being a pimp.

CHARACTER DEVELOPMENT: QUESTIONS FOR CREATING CHARACTER FACTS AND PERSONALITIES by Irene Watson An author who wants to create a realistic character needs to know everything possible about that character, not only to keep the facts straight, but also to understand that character's motivations. While critics often differentiate between a plot-driven and a character-driven story, a writer who does his or her work well will find that the character's motivations will drive the plot, and understanding the character's past is the key to understanding his or her motivations for the present and the future. Asking the character a series of questions not only helps to create a realistic character, but often the oddest or seemingly most random questions will result in new information about the character that can help a writer to overcome writer's block. Creating a character questionnaire for each major character can lead to richer fiction and greater focus. What is your full name? Where did you go to school? What is your favorite color?