Visualizing the Social Media Universe in 2020. Social media has seeped into virtually all aspects of modern life. 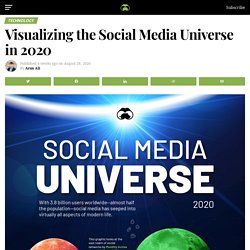 The vast social media universe collectively now holds 3.8 billion users, representing roughly 50% of the global population. With an additional billion internet users projected to come online in the coming years, it’s possible that the social media universe could expand even further. How the Networks Stack Up To begin, let’s take a look at how social networks compare in terms of monthly active users (MAUs)—an industry metric widely used to gauge the success of these platforms. Here’s a closer look at individual social platforms, and their trials and tribulations: Facebook To put it mildly, Facebook has had its hands full.

Yet, its stock price continues to advance to new highs while the traditional economy faces less than rosy forecasts. Snapchat Snapchat and founder Evan Spiegel have had a bumpy road since their IPO in 2017. Digital 2020 España - We Are Social ES. Digital around the world in April 2020. The world has changed dramatically over the first three months of 2020, with the COVID-19 pandemic impacting almost every aspect of our lives. 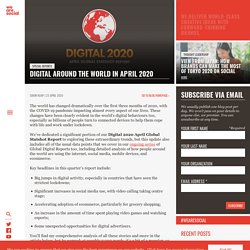 These changes have been clearly evident in the world’s digital behaviours too, especially as billions of people turn to connected devices to help them cope with life and work under lockdown. We’ve dedicated a significant portion of our Digital 2020 April Global Statshot Report to exploring these extraordinary trends, but this update also includes all of the usual data points that we cover in our ongoing series of Global Digital Reports too, including detailed analysis of how people around the world are using the internet, social media, mobile devices, and ecommerce. You’ll find my comprehensive analysis of all these stories and more in the article below, but be warned: at roughly 7,000 words, it’s a bit of a monster, so you may want to grab a coffee and get comfortable before digging in. 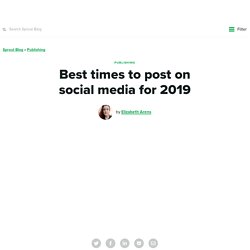 One fact that doesn’t change is that all social platforms move fast, with a constant stream of content vying for attention. You want to get the most eyes possible on your content and maximize engagement by knowing the best times to post on social networks. It’s not enough to guess when users might log in to a given network, or when audiences in your niche are hungriest for the latest information. Now that more and more brands from all kinds of industries realize the value of connecting with their audiences on social networks, it’s important to understand how your audience uses social platforms and what they want out of your content. An ecommerce brand may see social engagement follow daily and seasonal patterns of shopping engagement, while a corporate thought leadership account may see plenty of clicks at the start of the workday when readers are looking for inspiration. New Report Looks at Best Times to Post on the Major Social Platforms in 2019.

Since the dawn of social media marketing, brands have been trying to work out the magical best time to post, in order to maximize engagement, boost reach and, ultimately, increase conversions. 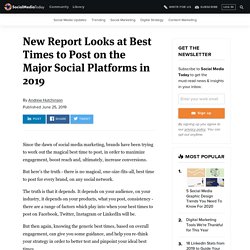 But here's the truth - there is no magical, one-size-fits-all, best time to post for every brand, on any social network. The truth is that it depends. It depends on your audience, on your industry, it depends on your products, what you post, consistency - there are a range of factors which play into when your best times to post on Facebook, Twitter, Instagram or LinkedIn will be. But then again, knowing the generic best times, based on overall engagement, can give you some guidance, and help you re-think your strategy in order to better test and pinpoint your ideal best times. 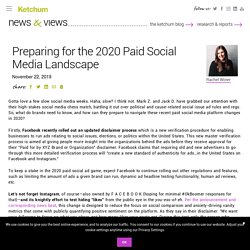 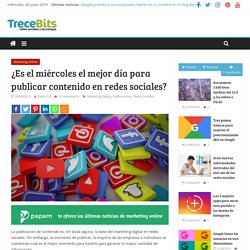 Sin embargo, al momento de publicar, la mayoría de las empresas e individuos se cuestionan cuál es el mejor momento para hacerlo para generar la mayor cantidad de información. How TikTok Is Rewriting the World. It is constantly learning from you and, over time, builds a presumably complex but opaque model of what you tend to watch, and shows you more of that, or things like that, or things related to that, or, honestly, who knows, but it seems to work. TikTok starts making assumptions the second you’ve opened the app, before you’ve really given it anything to work with. Imagine an Instagram centered entirely around its “Explore” tab, or a Twitter built around, I guess, trending topics or viral tweets, with “following” bolted onto the side. Imagine a version of Facebook that was able to fill your feed before you’d friended a single person. How to Optimize Your Blog for Content Distribution (With Infographic)

When it comes to content distribution, there are a few rookie mistakes brands make over and over. 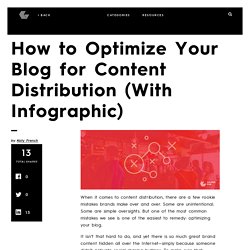 Some are unintentional. Some are simple oversights. But one of the most common mistakes we see is one of the easiest to remedy: optimizing your blog. It isn’t that hard to do, and yet there is so much great brand content hidden all over the Internet—simply because someone didn’t activate social sharing buttons. To make sure that doesn’t happen to you, we’ve compiled a handy checklist (and infographic) to help you optimize your blog for maximum visibility. Untitled. 22 Examples of Insanely Creative Instagram Stories. Standing out on Instagram Stories can be hard, especially if you’re a brand. 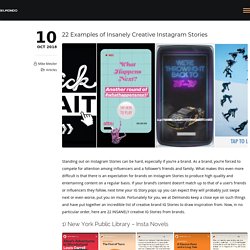 As a brand, you’re forced to compete for attention among influencers and a follower’s friends and family. What makes this even more difficult is that there is an expectation for brands on Instagram Stories to produce high quality and entertaining content on a regular basis. If your brand’s content doesn’t match up to that of a user’s friends or influencers they follow, next time your IG Story pops up you can expect they will probably just swipe next or even worse, put you on mute. Fortunately for you, we at Delmondo keep a close eye on such things and have put together an incredible list of creative brand IG Stories to draw inspiration from.

Now, in no particular order, here are 22 INSANELY creative IG Stories from brands. RIP Google+. We Hardly Knew Ye. Slate’s Use of Your Data. Why the Washington Post's Twitter Has Been So Good Lately. Inside Elisabeth's Murdoch's Vertical Networks & How it's Dominating Snapchat - VideoInk. Twitter and Facebook Are Platforms, Not Publishers. 8 Tips for Producing Amazing Vertical Video Content. There are more than a billion people right now who use Instagram. 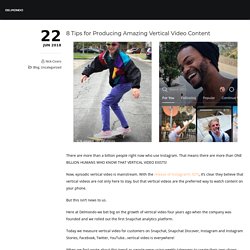 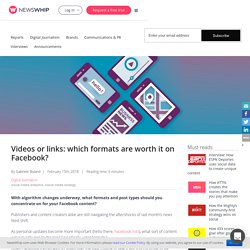 WhatsApp, the popular messaging platform that hit 1 billion daily users this summer, has been a breeding ground for misinformation in recent months, fact-checkers say. From fake news about last month’s election in Germany and this week’s Catalan independence vote, to rumors about storms in sub-Saharan Africa and fake kidnapping schemes in Brazil, hoaxes are spreading like wildfire in private groups on the platform.

That poses a big problem for both fact-checkers and WhatsApp itself. The Super-Aggregators and the Russians – Stratechery by Ben Thompson. In August 2011, just a day or two into my career at Microsoft, I sat in on a monthly review meeting for Hotmail (now known as Outlook.com); the product manager running the meeting was going through the various geographies and their relevant metrics — new users, churn, revenue, etc. — and it was, well, pretty boring. It was only later that I realized just how astounding “boring” was; a small group of people in a conference room going over numbers that represented hundreds of millions of people and dollars in revenue, and most of us cared far more about what was on the menu for lunch.

I’ve reflected on that meeting often over the years, particularly when it comes to Facebook and controversies like censoring too much, censoring too little, or “fake news”, and I was reminded of it again with this tweet: Even with all that context, though, I found Senator Warner’s tweet puzzling: how else would the propaganda group have paid? Las sombras y zonas borrosas del marketing con influencers. Facebook Faces a New World as Officials Rein In a Wild Web - The New York Times. Facebook now has 2 billion monthly users… and responsibility – TechCrunch. “We’re getting to a size where it’s worth really taking a careful look at what are all the things that we can do to make social media the most positive force for good possible,” Facebook Chief Product Officer Chris Cox told TechCrunch about the company’s new milestone.

Thirteen years after launching and less than five years after hitting 1 billion, Facebook now has 2 billion monthly active users. Facebook wants people to celebrate with a personalized “Good Adds Up” video they can make and share here. Meanwhile, Mark Zuckerberg played it cool with this brief announcement message. Cookies are Not Accepted - New York Times.