Fifteen Ways to Write a Novel 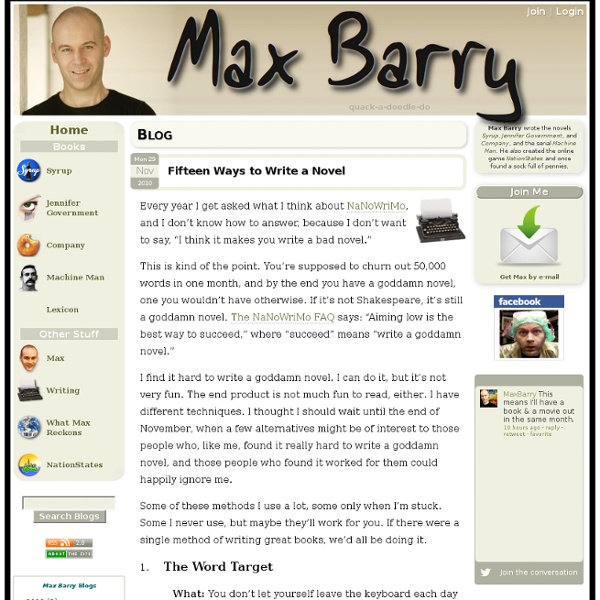 Every year I get asked what I think about NaNoWriMo, and I don’t know how to answer, because I don’t want to say, “I think it makes you write a bad novel.” This is kind of the point. You’re supposed to churn out 50,000 words in one month, and by the end you have a goddamn novel, one you wouldn’t have otherwise. If it’s not Shakespeare, it’s still a goddamn novel. The NaNoWriMo FAQ says: “Aiming low is the best way to succeed,” where “succeed” means “write a goddamn novel.” I find it hard to write a goddamn novel. Some of these methods I use a lot, some only when I’m stuck. The Word TargetWhat: You don’t let yourself leave the keyboard each day until you’ve hit 2,000 words.

10 Ways To Stop Worrying And Start Writing by Dara Girard Many people claim that they want to write. Most won't because of a giant monster called FEAR. It looms over individuals and paralyzes them. "What if I'm no good?" " What if I'm wasting my time?" 1) Handwrite. 2) Send yourself an email. 3) Commit before you're ready. 4) Write out the fears. 5) Pretend to be someone else. 6) Find a postcard. 7) Come up with a mantra that allows bad writing. 8) Remember you're reading the finished product. 9) Fear means you care. 10) Procrastinate. About the Author: Dara Girard is an award-winning author of romance and nonfiction who provides support and information for beginning and experienced writers, to help them keep going when things get tough, or when nothing seems to be happening.

The Review Review Story In the spring of 2008, I stopped submitting to literary magazines. As a fiction writer, trying to get my work published felt as futile and inconsequential as trying to write my name on a snowflake. I spent so much time sending work out and buying envelopes, printer ink, stamps, and paper only to receive one after another rejection letter, sometimes not even written on a full piece of paper but cut from the bottom third, as if rejection of my work were not even worth wasting a full page. Of course getting published is not easy and if it were, the rewards would not feel so valuable and hard-won. And I know that public recognition can take months, years, if not a lifetime or more. However, I also felt that there was something unsettling about this entire process. Worse, I was not the only writer like this. Wanting to get published in lit mags had started to feel like doing community service so that it would look good on your college application. At first, this discovery was comforting.

Seven Tips From Ernest Hemingway on How to Write Fiction Image by Lloyd Arnold via Wikimedia Commons Before he was a big game hunter, before he was a deep-sea fisherman, Ernest Hemingway was a craftsman who would rise very early in the morning and write. His best stories are masterpieces of the modern era, and his prose style is one of the most influential of the 20th century. Hemingway never wrote a treatise on the art of writing fiction. 1: To get started, write one true sentence. Hemingway had a simple trick for overcoming writer's block. Sometimes when I was starting a new story and I could not get it going, I would sit in front of the fire and squeeze the peel of the little oranges into the edge of the flame and watch the sputter of blue that they made. 2: Always stop for the day while you still know what will happen next. There is a difference between stopping and foundering. The best way is always to stop when you are going good and when you know what will happen next. 3: Never think about the story when you're not working. 7: Be Brief.

What I've Learned From 10 Years Of Writing & Independent Publishing It’s been a long time since the writing bug first bit me. Before I started blogging seriously, I had always been writing fiction. In 2nd grade I wrote my first short-story. (It was about a man who befriends a robot and subsequently quits his nerve-wracking office-job because now the robot does everything from cleaning the dishes to wearing his tie… At least that’s what I can remember of it…) Until this day, the euphoria of writing, the magic of seeing people, places and ideas pop into existence, word after word has stayed with me. Nevertheless, during my adolescence years I quickly became aware of another, less comforting feeling. Get Published Or Die Trying As a teenager I used to print out stories and give them to my family and friends. Circulation was obviously limited. Parallel to that, I created a little webpage and uploaded the stories there, too. Also I used to send out stuff to a few publishing houses. They agreed. After it was all through, I could finally go back to writing. 1. 2. 3.

Researching Literary Agents There are hundreds of reasons an agent will pass on your pitch—doesn’t connect with your story, not currently looking for clients, reps thrillers and you submitted a romance, is a Red Sox fan and refuses to rep a Yankees fan, etc. Your goal is to find agents most suited toward your writing to minimize the reasons they will pass. When I was ready to pitch OH BOY, YOU’RE HAVING A GIRL to agents, I didn’t have time to waste. I spent hours researching agents using Writer’s Market and the Guide to Literary Agents and doing follow-up legwork on the Internet. 1. Some agents are always accepting new clients. 2. If you ask an agent what’s the number one reason he or she rejects a query letter, most will say the same thing: The author pitched a genre that I don’t represent. [Did you know there are 7 reasons writing a novel makes you a badass? 3. Contract negotiations are where agents excel. 4. Good luck with your agent search!

Writer's Café fiction writing software - novels - screenwriting - short stories - creative fun Using Real Psychology in Your Writing Using Real Psychology in Your Writing Using Archetypes in Your Stories Writing Better Romantic Relationships This series looks at the Anima/Animus archetype, which is most often seen in romantic relationships, and how to use it to create more compelling romantic relationships, regardless of genre. Creating Better Antagonists Three-Dimensional Villains: Finding Your Character’s Shadow - Using Jungian archetypes and hands-on exercises, this article teaches fiction writers to tap their own dark sides to create realistic villains who will really challenge the hero/es and keep tension high. - by Carolyn Kaufman, PsyD The Other in Fiction: Creating Wonderfully Wicked Villains - The kinds of villains that keep us riveted to a story tap the darkest aspects of the human heart; learn about what those aspects are and how to use them in your fiction. - by Carolyn Kaufman, PsyD Forensic Psychology

LitReactor 3 Steps to Writing a Novel with Unforgettable Characters Character development is one of the first essential steps of writing a novel and it involves creating the people who will carry out your story. There will most likely be a variety of characters needed for your story, but none as important as your lead character – your protagonist. A well-developed protagonist has much to do with the success of writing a novel. When writing a novel, the protagonist should be someone that your readers feel is a “real person” that they come to love (or at least like a whole lot), can relate to in many ways, and will care about and think about long after they’ve turned the final page on your novel. How to Create “Real People” for Your Novel When writing a novel, there are many ways to go about creating characters and much has been written about it in “how to write a novel books”, sometimes in great detail. Writing a Novel – Four Attributes of a Lead Character: 1. 2. 3. 4. Writing a Novel – Three Attributes Every Character Has: 1. 2. 3. 1. 2. 3.

20 Basic Plots For Story Generators - Software Secret Weapons The 20 Basic Plots are collected by the Tennessee Screenwriting Association . 1. 2. 3. 4. 5. 6. 7. 8. 9. 10. 11. 12. 13. 14. 15. 16. 17. 18. 19. 20. (Note: Sometimes #19 & #20 are combined into rags-to-riches-to-rags (or vice versa) of a Protagonist who does (or doesn't) learn to deal with their dominating character trait). Looking At People Through Their Words illustrates the use of artificial intelligence and data mining for text analysis. Having the right merchant account and hosting including providers of dedicated servers which can also provide data recovery is the key the maximum uptime for your website.

Grammar Rules: Split Infinitives Q: I was taught by my English teachers over the years not to split infinitives, but now I see writers splitting them all the time. What gives? —Anonymous Growing up, I also had many teachers who taught me not to split infinitives—just as they taught me not to start a sentence with a conjunction. But, as with the conjunction myth, there is actually no rule that says you can’t split infinitives. An infinitive is a verb form that generally involves two words, the first of which is usually “to”—to run, to write, to somersault, to tickle, etc. The most famous of all split infinitives comes from the Star Trek gang: “to boldly go where no man has gone before.” While you may find some grammar style guides that recommend against it (Garner’s Modern American Usage is one), you’ll be hard-pressed to find any that completely and wholeheartedly ban it. I know what you’re thinking: If this isn’t a rule, then why do so many teachers treat it as such?

Manuscript Format for Novels by Glen C. Strathy The manuscript format used in publishing has evolved a little over time as technology has changed, and if you grew up with word processors, it may seem rather quaint, old-fashioned, and downright boring to look at. Word processors come with many desktop publishing capabilities that are so tempting to use. However, if you are submitting your book to agents and/or publishers, it is best to forget about all that and follow the correct manuscript format for publishing that was developed back in the days before word processors existed and professional writers used typewriters. There are several reasons why this format became standard. 1. Think about this. 2. Despite the fact that everyone uses computers, many editors still like to look at a hard copy and make editing marks in pencil between lines and in margins. 3. I know, word processors today can count the words in a manuscript with one simple click. 4. 5. White paper.

Short Story Ideas - Home Learn How to Publish a Book: FREE Download from Writer's Digest 1. Write the best manuscript that you possibly can. Don’t just come up with a great idea—spend time executing that idea by writing, editing, rewriting, editing and rewriting again. Find a group to workshop your novel with, whether it be in person or online. Book publishing starts with a great manuscript. 2. Whether you’re pitching to an agent or directly to a publisher, you can’t just write “publish my book because it’s awesome.” 3. Nearly all writers get rejected. 4. Get on Twitter and Facebook and Pinterest. 5. In this age of the Internet, it feels like everything flows at lightening speed. 6. After you submit your query letter out to agents and editors doesn’t mean you have to stop learning. 7. While you are waiting for that phone call from a book publishing company saying, “We want to publish your book!”