The Best Books: The Top 100 Novels of All Time - Listmuse.com 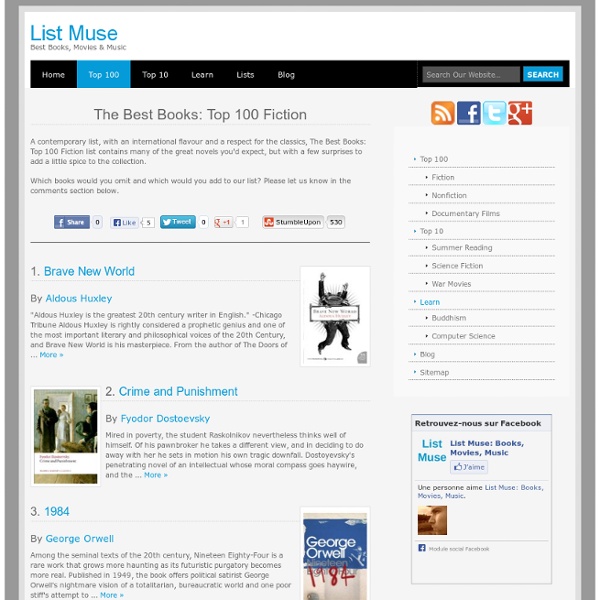 A contemporary list, with an international flavour and a respect for the classics, The Best Books: Top 100 Novels of All Time list contains many of the great works of fiction you'd expect, but with a few surprises to add a little spice to the collection. Which books would you omit and which would you add to our list? Please let us know in the comments section below. 1. Brave New World By Aldous Huxley "Aldous Huxley is the greatest 20th century writer in English." 2. By Fyodor Dostoevsky Crime and Punishment is one of the most important novels of the nineteenth century. 3. By George Orwell Hidden away in the Record Department of the sprawling Ministry of Truth, Winston Smith skilfully rewrites the past to suit the needs of the Party. 4. By Leo Tolstoy Published to coincide with the centenary of Tolstoy's death, here is an exciting new edition of one of the great literary works of world literature. 5. By J. A modern classic, this early novel by Nobel Laureate J. 6. By Joseph Heller 7. 8. 9.

A Slumber Did My Spirit Seal repeating pattern of slack and stressed syllables that forms the fundamental unit of meter. The number of feet in a line gives their names to monometer (1), dimeter (2), trimeter (3), tetrameter (4), pentameter (5), hexameter (6, also called alexandrine), heptameter (7, also called “fourteeners”), octometer (8), nonometer (9), the very first and the last two being quite rare. See also scansion. pitch: Book Country: Discover New Fiction with the Genre Map Publishers, booksellers, and readers describe books by their literary categories, or genres. It's how books are placed in stores and sold online. We created the Genre Map to help you find the right genre for your book. Roll over the map with your cursor to see the different genres. Some categories, such as women's fiction, stand alone. If you select mystery, fantasy, romance, science fiction, or thriller, you'll see the many subgenres that you can explore within these categories.

10 Books Every Man Must Read What are the Top Must Read Books For Men? There are books that you read, and there are books that change your life. The list compiled below is an indication of some of the best books to read. From an infinite list of books, these 10 are ones that have defined generations and inspired countless authors. Some are a basis of what it is to be a man in today’s culture; to face fears and fight through them, to fight for justice and what is right, embracing the leader in us and leading a life of integrity. Men and woman everywhere, we give you, 10 Books Every Man Must Read. The 16 Best Dystopian Books Of All Time Dystopian novelsâ€”stories of the horrific futureâ€”are so common as to be almost forgettable. Here is a compilation of what I believe are the 16 greatest of the genre. I could happily list twice as many that are amazing, but these are the best. From the post-apocalyptic wasteland to deadly viruses to social malaise, all possible bad futures end here. 16.

14 Ways to Acquire Knowledge: A Timeless Guide from 1936 Consider the knowledge you already have — the things you really know you can do. They are the things you have done over and over; practiced them so often that they became second nature. Every normal person knows how to walk and talk. But he could never have acquired this knowledge without practice. For the young child can’t do the things that are easy to older people without first doing them over and over and over. Most of us quit on the first or second attempt. proverbs TRADITIONAL PROVERBS: A barking dog never bites. A bird in the hand is worth two in the bush A fool and his money are soon parted. A friend in need is a friend indeed. A new broom sweeps clean. A nod's as good as a wink to a blind man.

50 Sophisticated Words You Should Start Using Instead - Online College Your New Year's resolutions might have included getting more exercise, or going back to school to get your degree. Might we humbly suggest you also take this time of starting things anew by phasing out some of the played-out words in your vocabulary and replacing them with creative alternatives? Don’t feel bad; everyone you know has been guilty of letting a "fail" or an "LOL" slip at least once in a while. But those words are tired. They need a long rest. Here are 50 sophisticated utterances to deploy instead. Book-A-Minute Classics Got another book report to do? English teachers have the inconsiderate habit of assigning mammoth-sized works of literature to read and then actually expecting you to do it. This wouldn't be so bad except that invariably the requisite reading is as boring as fly fishing in an empty lake. Half of those books don't even have discernible plots. And let's face it -- the Cliff's Notes are pretty time-consuming too. Worry no more.

American Book Review 1. Call me Ishmael. —Herman Melville, Moby-Dick (1851) 2. Language Arts Games - Grammar, Punctuation, Capitalization, Vocabulary Sheppard Software's Language Arts page features a variety of games for different grade levels. Elementary students (and anyone who needs a refresher) can play the animated grammar and punctuation games, which review basic punctuation and grammar concepts. This section is continually being refined and expanded, so check back often! Middle school, high school, and adult learners can review their SAT and advanced vocabulary through the SAT Words and Vocabulary in Context games. Memorizing a wide variety of important vocabulary words will really help you succeed in the verbal sections of the SATs and GREs. In addition, reading challenging books, using the vocabulary you learn in daily life, and writing will help cement the words in your mind.

Why I am an Atheist In 1903, Kentucky-based newspaper "Blue-grass Blade" asked its readers to write in and contribute to a forthcoming feature named, "Why I am An Atheist." Hundreds of letters soon arrived and many were subsequently reprinted in the paper; over a century later, in 2011, they were compiled to form the book, Letters from an Atheist Nation. Below is just one of the letters. It was written by Minnie Parrish, a 23-year-old divorced mother of four who later went on to become the first female doctor to practice in North Texas.

15 Books You Should Have Read in 2010 - Culture Image by Jane Mount, Courtesy 20x200 Yes, we read Freedom this year and yes, it was good. As Esquire put it, it “was one great slab of a book, at a time when most books have given up on greatness.” But there were other books in 2010, books that had to compete for our ever more challenged attention spans and won. So we asked a few members of the GOOD team & some of our good colleagues which book made their best list this past year.